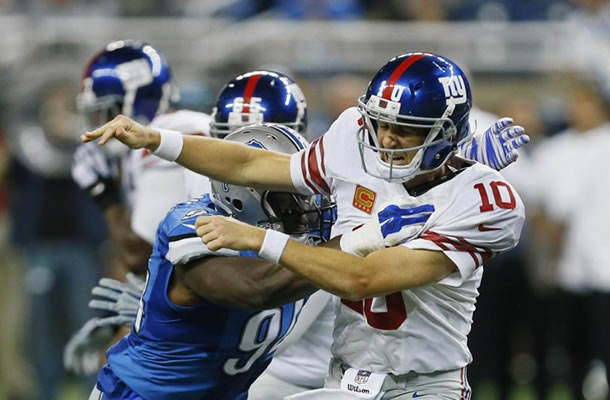 I really would like to write about more than just soccer for the next six months. The Yankees have made it difficult to cover this season, and I was hoping the Giants would come out and really give us something to talk about. Well, they did, but not exactly how we were hoping. They were hammered by the Lions 35-14, and are now 0-1. Let’s talk about the particulars.

The way this game started, I thought the Giants were going to get routed 50-0. The first drive for the Lions really set the tone for the rest of the game. After keeping the running game in check, the Lions had a 3rd and longish at their own 33. All the Giants had to do was hold for one more play, and they’d get the ball back. The rush looked promising, but Lions QB Matthew Stafford somehow eluded a couple of the Giants’ beefy linemen. During that time, Stevie Brown lost Lions All-World receiver Calvin Johnson, and he was left alone in the middle of the field (the Perry Fewell Special). Stafford threw the ball to Johnson, Brown and new high-priced Corner Back Dominique Rodgers-Cromartie knocked into each other, leaving Johnson completely open, and the big receiver caught the ball and scampered unmolested 67 yards for the opening score. Gut punch.

The Giants would go three-and-out, and Stafford threw another TD pass to Johnson (a sweet diving catch by a player who is just better than everyone on the field right now). That’s when the Lions must have realized they had bet the Giants to cover the spread, because they started sabotaging their own potential monster win. Penalties and ineffectiveness actually got the Giants back into this one, as Eli Manning hit Larry Donnell for a 1-yard TD to pull the Giants back to within seven. A missed Field Goal by Lions Kicker Nate Freese (a BC grad), kept the game at 14-7, with the Giants set to receive the ball in the second half. It was pretty unbelievable, considering the Lions led 14-0 just a few minutes into the game.

Eli had a bad game against Detroit, completing just 18 of 33 passes for 163 yards, 1 TD and 2 INTs, but it wasn’t really all his fault. The Giants offensive line was atrocious in this game, so Eli rarely had time to run his new offense. He was sacked only twice, but was rushed and hit all game long. His receivers didn’t really get open either, which is never good. Donnell, the Giants new starting Tight End who had previously caught 3 passes in his career, caugh 5 passes for 56 yards in this one, including the TD. That led the Giants in all receiving categories, which is pretty sad. Victor Cruz caught just 2 passes for 24 yards, which is a pretty good way to guarantee the offense will stink it up on any given night.

The Giants were unable to do much with the running game either, but it’s hard to tell if that’s something that can be blamed on Rashad Jennings (16 carries, 46 yards and a TD), Andre Williams (5 carries for 9 yards) or that terrible offensive line.

So yeah… that was ugly. Like any good fan, I’m willing to give the Giants a Mulligan in Week 1. I mean hey, last year they lost the first six games, so they have five more chances to improve upon 2013’s disasterous beginnings. Eli needs better protection from his offensive line if he’s going to implement the new system set up by new Offensive Coordinator Ben McAdoo. The Giants also need to establish the running game better (again, something the OL could help with if they blocked anyone) if they’re going to have any kind of chance at saving Eli from a sack-related injury. We’ll find out what adjustments Coach Coughlin makes next week, when the Giants take on a tough Arizona Cardinals team in New Jersey.