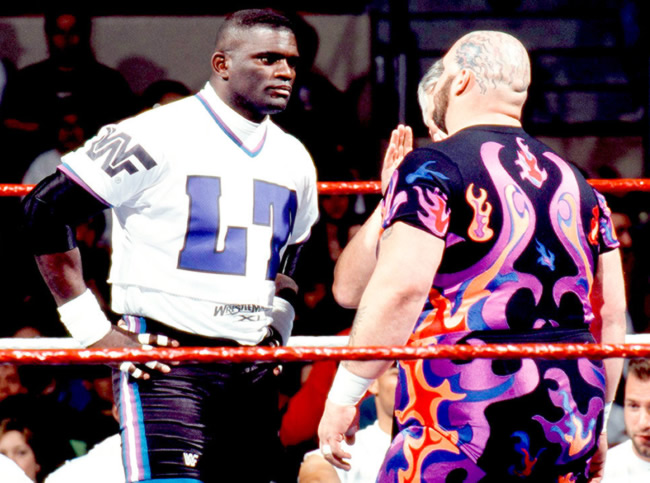 1995 was a very lean year for the then WWF. An exodus of their big stars to WCW, as well as their inability to sign and develop new talent and Vince McMahon’s propensity for using cartoonish gimmicks, all contributed to an overall decline in the product. How did Vince and the WWF brass try to save Wrestlemania? By having Lawrence Taylor, a retired football player, main event the entire show! Let’s take a look back at one of the worst Wrestlemanias in the history of WWF/WWE.

In all seriousness, getting L.T. was a pretty good coup for Vince McMahon in 1995. Taylor had retired about a year-and-a-half earlier, and he hadn’t yet been arrested for, or convicted of, any of his crimes. Sure, he was still a raging addict at the time, but I’m sure the WWF had enough experience dealing with those back then. They cut the deal with Taylor to appear at ‘Mania, but first they would need to set the angle up. Queue the Royal Rumble Footage!

OK… So before that match, Bam Bam Bigelow and his partner, Tatanka (both wrestling under the banner of Ted Dibiase’s Million Dollar Corporation), had lost a match against Bob Holly and the 1-2-3 Kid for the vacant WWF Tag Team Championship. During the aftermath of that star-studded barn-burner of a matchup, Bam Bam accidentally bumped into Taylor, who was sitting at ringside watching the event (and probably trying to figure out how many cocaine dealers he knew in Tampa for his after-the-show shenanigans). When Bigelow attempted to take his anger out on the Giants’ legend, L.T. gave the old “hey man. no hard feelings,” and attempted to shake the fiery heel’s hand as a show of good sportsmanship. Well, wouldn’t you know it, Bam Bam was a dick. Instead of shaking L.T.’s hand, Bigelow shoved Taylor practically out of the arena. L.T. rushed to his feet and the two had a heated exchange. A disgusted Vince McMahon apologized to the fans from his ringside announcer position, and that was that. No harm, no foul, right? Wrong. There was harm… and there would be foul.

By the way, credit goes to L.T. here, who played this all very well. He definitely showed some of the acting chops that would help him get cast in Any Given Sunday as “Shark,” a legendary linebacker who changes the way the sport is played, but then ends up doing a bunch of cocaine off of hooker’s boobs and asses. (Acting!!).

Anyway, when Vince McMahon apologized again the next night on Raw, and demanded that Bigelow apologize publicly in an interview segment later on in the night, fans should have known something wacky was about to go on. Guess what? Bigelow was still a dick! Not only did he not apologize to Taylor, Bam Bam demanded an apology from the football legend! On top of that, the tattooed oaf actually challenged L.T. to a match! Are you serious, bro? He’s not even trained! 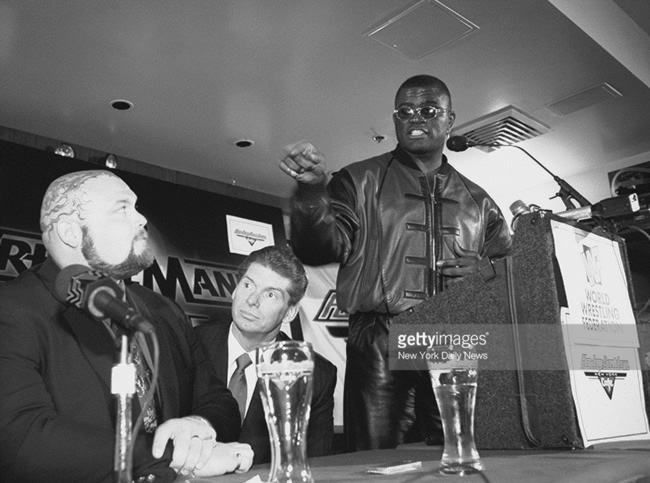 Like any classy good guy, Taylor initially declined the match, willing to let bygones be bygones. Bigelow was not having that, though, and he continued to instigate L.T. Taylor appeared on RAW at the end of February to again tell Bam Bam no, one thing led to another and the match was essentially agreed upon for Wrestlemania. In retrospect, he should have just offered Taylor some blow and an underaged prostitute in exchange for accepting the match. They would have had it a whole lot sooner. The two squared off at the official Wrestlemania press conference in front of a ton of legitimate national sports news media, where Taylor declared “I’m gonna have me some fun at Wrestlemania.”

To the WWF’s credit, this storyline was done pretty well. Taylor soon began training with Diesel, the WWE champion at the time. He also amassed a crew of current and former football stars to be in his posse. Ken Norton, Jr., Chris Spielman, Carl Banks, Rickey Jackson, Reggie White and Steve McMichael, all legendary in their own ways, all had L.T.’s back, and helped him prepare for the big match. Mongo even got involved on RAW, brawling all over the arena with Kama (aka Papa Shango aka The Godfather) on a night where the former Bears Defensive Tackle was supposed to be guest commentating. Bigelow and Taylor had one other major confrontation, at a pre-Wrestlemania workout in Times Square. Bigelow tried to bum rush Taylor, who managed to get the upper hand on the 400 lb grappler. 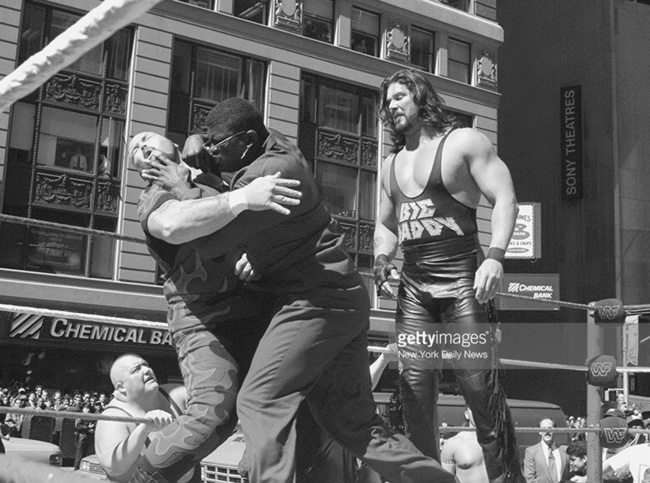 On April 2, the two finally squared off in the main event of the biggest show of the year. While Bigelow proclaimed that he would never lose to a “flash in the pan” like Taylor, the former New York Giant came to the ring with a lot of pomp and circumstance, even getting Salt N’ Pepa to sing him to the ring with a modified version of their hit song “Whatta Man.” Taylor was, indeed, whatta man, as he ended up pinning Bigelow in 11 minutes and 42 seconds. Despite the fact that Taylor had no ring experience, the match actually wasn’t half bad. Bigelow made Taylor look like a million bucks, and the two carried the match so well that they didn’t even need any ringside shenanigans from everyone who was at ringside (Bigelow had also brought his posse with him).

Is this the most memorable ‘Mania main event of all time? Of course not. The fact that it had to happen speaks volumes about not only the lack of quality in the overall WWF product, but specifically about the kind of drawing power and fan following Kevin Nash had as the top guy in the company. Good job, L.T!