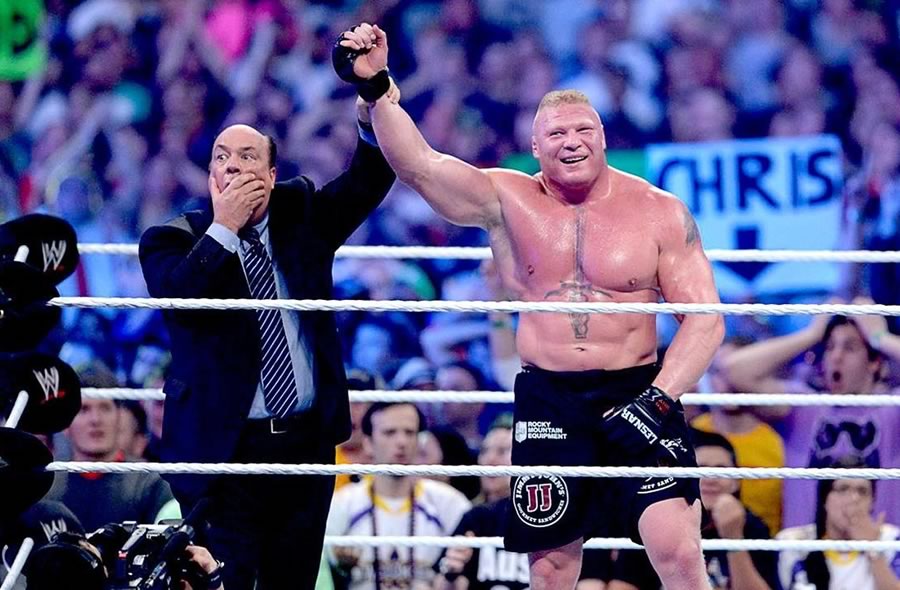 For those of you who don’t follow professional wrestling, the Undertaker had never lost at Wrestlemania before last night. Of course, I know wrestling is predetermined. Don’t think I’m sitting here shocked that someone was physically able to beat someone in a WWE ring (plus, I’m pretty sure Lesnar would kill the Undertaker in real life). However, wrestling is about story lines and characters, and there has never been a character, or a storyline like the Undertaker’s Wrestlemania streak, which had reached 21 straight wins before last night. The “streak match” has become one of the biggest events of the year over the last decade or so, sometimes even overshadowing whatever world championship match is set for the actual main event. The fact that the Undertaker only wrestles basically once per year nowadays makes this streak even more special. The man behind the gimmick, Mark Calloway, is one of the most respected men in the industry as well, which is probably a huge reason why the streak even reached 21.

When Lesnar won, it was like no one knew what to do. Fans were completely dumbfounded, and barely even reacted to the result. The WWE production people took full advantage of this, panning the crowd for shocked face after shocked face. At home, my buddy and I were stunned too. “Did Lesnar just win?” “Wait… is the match over?” “Did the streak just end??” Then, when WWE ring announcer Justin Roberts took to the mic to announce Lesnar as the winner, we knew it was true. Only then did we, and the 80,000 people in attendance at the Superdome in New Orleans, react. Some in the crowd booed, Tom and I agreed that it was awesome. I’m still thinking about it today, which is why I decided to write this post.

As soon as Lesnar was announced as the winner, internet nerds all over the world took to their keyboards to complain about the loss, saying that it wasn’t right for the streak to end the way it ended. Lesnar, it seems, was not worthy of being the one to end the streak. “He’s a part timer!,” they yelled. “The streak should be used to elevate a new star!,” they screamed. “Mom! I said ketchup, not mustard!,” they quibbled… To them I say, did you even watch that match? For the first time ever, Undertaker looked like an old man who had lost a step. I am not taking anything away from Mark Callaway as a performer. The guy is among the greatest WWE superstars of all time, and there’s no denying it. That being said, he’s now 49 years old, and he was in the ring with a guy that is, in ever way, bigger, faster and better than he ever could be today. Lesnar is a beast. The way the Undertaker was moving last night (rumor has it he sustained a possible neck/concussion injury early in the match, but he didn’t look particularly good before that either), there was no way they could have realistically sold him beating Lesnar.

My buddy Tom and I spent the whole match kind of out of the whole thing, because we knew Lesnar wasn’t going to win, but couldn’t really figure out how they could possibly have ‘Taker go over. That’s why we were so impressed when Lesnar got the 123. That being said, they made sure Undertaker looked very strong in this match. Lesnar kicked out of both the choke slam and the tombstone pile driver (Undertaker’s finishing moves), didn’t submit to two separate applications of Hell’s Gate (Undertaker’s submission special move) and needed three F-5’s (his own finisher) to even win the thing. Undertaker ended up looking like a guy who gave his all, but just didn’t have what it takes to beat a beast like Lesnar, and that’s, realistically, they way it should have been.

Those crazy internet nerds have their theories though. First of all, there’s the rumor that Lesnar broke the script and decided to pin the Undertaker on his own. This couldn’t be dumber. Lesnar has millions and millions of dollars on the line here. Not only that, but he’s always spoken of having respect for the business. This is not plausible, and it’s downright stupid. Another rumor is that ‘Taker’s injury caused the WWE to change the finish, but reports are coming that this was the planned finish all along. After all, it is rumored that Undertaker wanted to drop the streak to Lesnar back in 2010a. If this is, indeed the case, then it’s most likely that Callaway hand picked Lesnar to be the guy to end the streak. He’s getting old, after all, and all streaks are meant to end. The third main rumor is that ‘Taker was pushed into giving up the streak by Vince McMahon. This would seem likely if it was part of a story line (the evil Mr. McMahon vows to end the streak), but not in real life. Like everyone else, McMahon has nothing but respect for Mark Callaway the man and Undertaker the character. Also, the guy is one of the biggest stars ever. He’s not going to do something he doesn’t want to do. Let’s disspel all of these stupid things and just accept that Mark Callaway decided that his character’s streak needed to end, and picked Brock Lesnar as the guy to end it. That’s it. There’s no conspiracy. It’s just wrestling.

The fact that I, and the internet nerds (note, in case you haven’t noticed, I’m an internet nerd too), are still thinking about this and are experiencing so many feelings about this that we’re continuing to discuss it, makes it a great success. I almost felt bad for Daniel Bryan, who later went on to culminate a nearly year long feud with “The Authority” to win the WWE World Heavyweight Championship against all odds, because the crowd was basically too shocked to even get into the main event match until it was nearing the end.

Whether you agree with the decision or not, the streak is over. I, for one, think it’s awesome. If this is the end of the Undertaker’s historic career, he will be missed. Congratulations to Brock Lesnar, as he has now etched his name into WWE lore.

Featured image courtesy of: The Sun

One thought on “The Streak Ends… Wowsers”