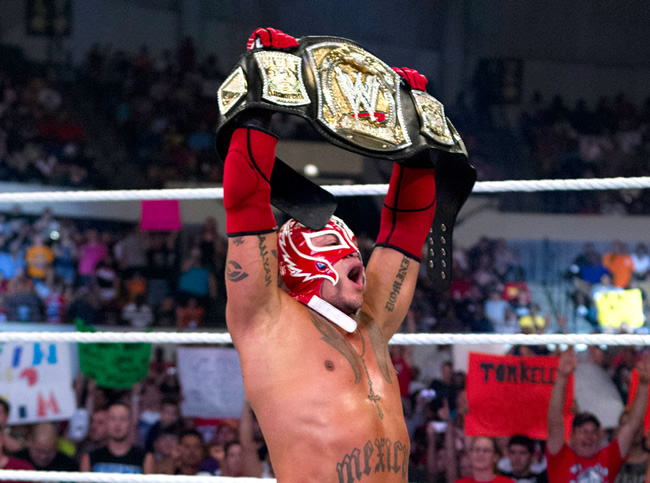 The WWE World Heavyweight Championship tournament, which will culminate at Survivor Series from Atlanta, Georgia on Sunday, November 22nd, started last week! We’ve already seen some interesting results (how about Kalisto beating Ryback?), and I can’t wait to see how the rest of it unfolds. As we wait to see how it all turns out, let’s continue our coverage of the history of WWE/WWF championship tournaments! Today, we’ll tackle the most recent one, which took place on Monday Night Raw on July 18, 2011. This one will be a little more brief than the last two, I promise.

Let’s start with the background, and a pipe bomb. Oh yes… the infamous “pipe bomb” promo by CM Punk on June 27, 2011. You see Punk had recently began a feud with the great John Cena over the WWE championship. Punk was fed up about Cena’s choke hold on the top of the WWE card, and had vowed to defeat Cena at Money in the Bank and win the belt from the face of the WWE. On top of that, Punk’s real life contract was set to expire the day after the PPV, and he was legitimately unsure if he would be returning to the company or not. On the Raw three weeks before the big showdown, Punk was given an open microphone to go out and say whatever he wanted to say.

In what was one of the most brilliant wrestling promos ever cut, Punk broke the fourth wall, speaking about such things as backstage politics, people who kissed Vince McMahon’s ass to get ahead in the company and many other things no wrestler had really ever talked about quite so candidly on television before. There are some arguments as to what was really a “shoot” or scripted, especially when Punk had his microphone cut off as he was about to begin berating the McMahon family, but the promo was still revolutionary in the industry, and damn well entertaining to boot. Throughout, that speech, and in the coming weeks, Punk reiterated his intentions to win the title at Money in the Bank and then leave the WWE forever with the championship belt.

At Money in the Bank, Punk did just that. I remember this match well because the hype behind it actually motivated me to buy this PPV. It was the first PPV I had ordered in probably a decade, but I was hooked on the storyline. Punk, “The Voice of the Voiceless,” had a barn burner of a match with Cena in the main event. Punk played the role of the baby face in peril perfectly, spending a lot of the match getting beat on by Cena and somehow managing to kick out of everything Cena threw at him. About 30 minutes into the match, Vince McMahon had apparently seen enough and and decided to more directly affect the match (he had previously promised to fire Cena if he lost the belt to Punk).

The Owner of the WWE came down to ringside with John Laurinaitis just after Punk had hit Cena with his Go To Sleep finisher (the momentum caused Cena to fall to the outside of the ring, so Punk couldn’t cover the champ), and immediately got involved. Cena got Punk in his STF submission finisher, and Vince, for like the 100th time since Montreal, attempted to have the timekeeper prematurely ring the bell to end the match. He sent Laurinitis to do the deed, but the advocate of “People Power” was intercepted by Cena, who clocked him into the next week. Cena then told Vince that he wasn’t going to win in that way, and got back into the ring. Punk met him with another GTS and pinned him for the win. Vince then demanded that Alberto del Rio come down to cash in the MITB title shot he had won earlier int he night, but Punk knocked del Rio out before he could do so. Punk then ran out through the crowd with the belt. It’s not often that I’m legitimately surprised by a WWE finish or storyline booking, but this was awesome.

This brings us to the next night’s Monday Night Raw. An irate Vince came out to start the show and called Punk “an egotistical, selfish turd.” How’s that for sour grapes? Vince exclaimed that no man was bigger than WWE, and that it would not be stopped. He further announced an eight-man single elimination tournament for the WWE championship featuring Rey Mysterio, Jr, Dolph Ziggler, R-Truth, Jack Swagger, Kofi Kingston, Alberto del Rio, Alex Riley and The Miz. John Cena was not going to be in the tournament, because needed to punish the former champ for failing to beat Punk. More on that later… of course.

The tournament went fairly quickly, as this was jut a two-hour show, but it was entertaining none-the-less. The Miz took our Riley in the first round, while Kofi Kingston shocked del Rio. On the other side of the bracket, R-Truth was able to get by Jack Swagger and Mysterio got by Dolph Ziggler. In the second round, Mysterio was able to get past R-Truth, while The Miz bested Kingston. That set up the final between Mysterio and The Miz, with the winner taking home the gold. Before the final got underway, however, McMahon came out to address the crowd again. McMahon angered Mysterio, and the crowd, by postponing the finals until the following week because he had something more important to do. He then brought John Cena out and fired him. However! HHH immediately came out and announced that, after reviewing McMahon’s actions over the course of the summer, and talking to the board of investors, Vince was out as COO. Just like that, a teary-eyed Vince, and his pink jacket, were ousted in favor of the new COO, HHH himself.

Finally, on the July 25th Raw, the tournament final took place. Mysterio and The Miz kicked off the show with their match, and most surprisingly, The Miz succumbed to the 619 and the big splash for the 123. Rey Mysterio, after over 20 years in the business, was finally at the top of the mountain. He was WWE champion! It was a truly great moment of tribute to one of the most beloved superstars in the history of the sport, and it became obvious that that’s all it was when, later that night, HHH announced that John Cena would get a shot at the belt in that night’s main event. As the story goes, Cena won the belt. Eventually, CM Punk came back, and he would win the belt back at Summerslam, only to lose it immediately to Alberto del Rio, who was cashing in his MITB shot for real this time. Punk did eventually go on a long run as champion, lasting over 400 days on top after winning the belt at Survivor Series that fall.

There you have it, folks. that’s the last of the tourneys. Are you ready for this Sunday? I sure hope so. We’ll have a bit more coverage on the upcoming show this week, so keep reading.