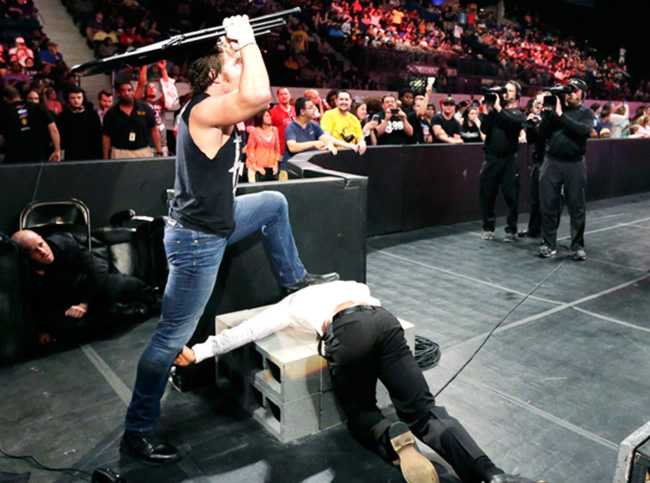 In the world of professional wrestling, props are often used to accentuate the acutely choreographed violence within the squared circle. We all love when someone gets cracked with a chair, put through a table or when guys take absurd bumps with ladders, right? Hell, even a sledgehammer, when used properly, can be a pretty cool thing to watch. You know what doesn’t work for me? Cinder blocks.

For you non-wrestling fans, let me break down how the spot works. Two guys are in the middle of a grueling physical match (or maybe a bad guy is just throwing a sneak-attack beating on a good guy), and one of the guys (usually the baddie), decides it’s time to inflict ultimate punishment and end the match. This man has already used ladders, tables and chairs (oh my) to try to fell his opponent, but the beaten adversary keeps getting up. What does the first guy do? Well, luckily, he brought some cinder blocks. Guy 1 raises the cinder block high over his own head and slams it down over the head of Guy 2. Or, some kind of impact head move, like the curb stomp, is performed on Guy 2, causing his head to crash hard into the cinder blocks. No matter how we get there, the result is devastation, destruction and a 1…2…3.

Sounds awesome, right? Even looks pretty cool! Well, sort of. The final part of the devastating visual is that the entire cinder block crumbles from the impact. This is where this spot loses me. Why? Because it’s a fucking cinder block! Have you ever tried to smash a cinder block? Probably not, you know why? Because it’s made of concrete. It’s used to hold up houses and such. If you were to smash a man’s face or head into a cinder block for real, the head would crumble long before the block would even get a scratch on it. The only way you could crumble a cinder block over someone’s head is if that person was a T-800 from the Terminator movies. Not even the real Arnold Schwarzenegger could withstand such a hit!

Anyway, that’s pretty much it for this rant. I love professional wrestling, and I’m able to suspend my disbelief for most of the things that go on, but come on now. Let’s stop this once and for all. I mean look at this gif below. I’m pretty sure we just witnessed a murder! Oh wait, Mack came back the next season… Sigh, I’ll admit its a pretty cool gif though.