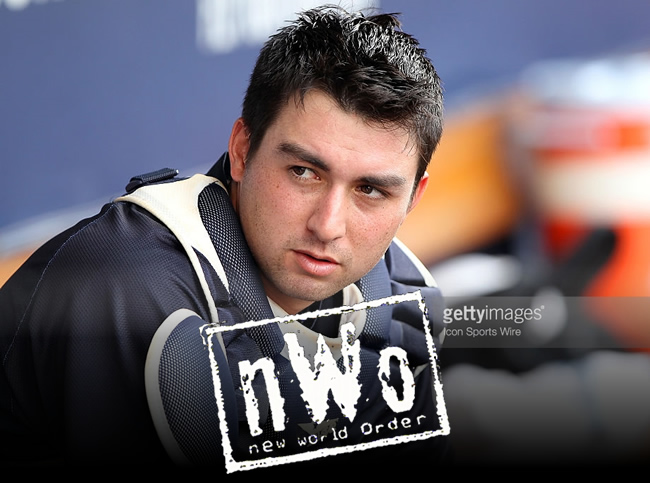 If I had to rank the backup catcher in level of importance to the team, it would probably be fairly low. It’s probably more important than the rest of the bench positions, because backup catchers tend to play more often than other bench guys. It’s also probably more crucial than last couple of guys out of the bullpen, like the long man or the lefty specialist too. That being said, it’s still important for teams to have adequate players at all positions, so let’s examine what I think the Yankees should do at backup catcher for the 2017 season. Hint: It ain’t Austin Romine.

First, let’s talk about Romine, because I don’t want you guys to think that I don’t value the job he did this past season. As far as backup catchers go, he was a very solid one for the Yankees this season. Previous failures to stick at the major league level–Romine has failed to thrust himself into the backup catcher/catcher of the future role everyone thought he might one day fill–lowered his stock to the point where he was designated for assignment prior to the 2015 season. Think about that. He went from being among their top catching prospects to not even being on the 40-man roster in about four years. Talk about falling off a cliff.

Worst of all, it was a merited demotion. This was not one of those unfortunate “roster crunch” situations. Romine plain stunk in his early years on the team. From 2011 to 2014, he hit .204/247/.281 with 1 home run and 11 RBI in 181 plate appearances. After being DFA’ed in favor of John Ryan Murphy in 2015, Austin struggled at AAA and barely even made it back to the big leagues, appearing in just one game before an injury ended his season almost as soon as it started in late September.

When Murphy was swapped for Aaron Hicks prior to the 2016 season, and future star Gary Sanchez faltered in spring training (seriously, he went 2-for-22), Romine suddenly found himself as the full-time backup catcher for the Yankees–a role he earned with a good spring of his own. Once he was given the job, Austin did a great job of keeping it. In 62 games and 176 plate appearances (almost as many as he’d had in his previous four big league visits), the Son of Kevin hit .242/.269/.382 with 4 home runs and 26 RBI.

Those numbers aren’t necessarily eye-popping, but they were above and beyond what was expected of him and, anecdotally speaking, he seemed to get quite a few “big hits” throughout the course of the season. He also played acceptable defense, which is all you can really ask for from the backup catcher. The fact that he wasn’t a zero with the bat was kind of an added bonus.

So, after that fairly glowing debut, why should the Yankees even consider dumping Romine? Because they can afford to. First of all, from a pure dollars point of view, Romine is set to head to arbitration this winter if the Yankees want to keep him. This means his salary will be jumping from the minimum for a player with his level of experience–he made $556,000 last season–to a significantly higher number in 2017. According to Riveraveblues, Romine is projected to receive $900,000. While that’s certainly not a bank-breaking figure, the team is trying to stay under the luxury tax this offseason, so why not save a few hundred thousand bucks, especially on a player that is easily replaceable.

That brings us to the man in the photograph at the top of this post, Kyle Higashioka. If you’re my kind of Yankees fan, you already know who Kyle is because you follow the Yankees at all levels of the organization. If you’re a more casual fan, allow me to give you a quick breakdown.

Higashioka has been in the organization since the Yankees took him in the 7th round of the 2008 draft. That’s a hell of a long time, isn’t it? For many years, he was considered an all glove, no bat type of organizational catcher, so his climb up the ladder was a very slow one. On top of that, his career was also delayed by a couple of intense injuries, including Tommy John surgery in 2013.

When Higashioka came back from the surgery, and the broken thumb he suffered while recovering from that surgery, he returned seemingly as a whole new hitter. Seriously, I think he must have had the same procedure Henry Rowengartner had in Rookie of the Year, because all of a sudden, the weak-hitting 26-year-old catcher had himself a mighty powerful bat.

Finally fully healthy, Kyle had a complete breakout in 2016. He split time between AA Trenton and AAA Scranton/Wilkes Barre last year, and ended up playing a career high 102 games. More importantly, he discovered a power stroke few non-insiders probably ever imagined he possessed. In those 102 games, Higashioka hit .276/.337/.511 with 24 doubles, 21 homers and 81 RBI in just 416 plate appearances.

Say what? In his previous eight seasons with the organization, Higashioka had mashed only 30 taters in 1,601 plate appearances. Suddenly, he was slugging like Roy Hobbes, although without breaking any scoreboards as far as I know. Seriously though, wow. What an improvement. All of a sudden, the Yankees had two power-hitting catching prospects knocking on the big league doors, instead of just “The Sanchize.”

Don’t think I’m being unrealistic by jettisoning a proven commodity in favor of an unknown. Do I think Higashioka is guaranteed to play better than Romine just because he had a big year at AAA this year? Of course not. However, the guy the Yankees don’t take as their backup will probably be playing elsewhere in 2017. They have to ask themselves if they’d rather stick with the known entity in Romine–even though 2016 is really the only season where he has shown the ability to do anything at the big league level–or try their hand with someone new.

At the end of the day, the backup catcher just needs to give the starter a day off here and there–not as huge a deal when your starting catcher is only going to be 24 years old to start the season–call a good game, play replacement-level defense and get a big knock here or there in an important spot. I think Higashioka might be able to do it.

If Brian Cashman, Joe Girardi and the Yankees’ brass are really concerned about whether or not Higashioka can handle the big league role–they should have a pretty good idea after seeing him in several spring camps–they can bring in another veteran as insurance. Guys like A.J. Ellis, Jarrod Saltalamacchia or Geovany Soto–there are others out there, but they probably can’t be had on an un-guaranteed minor league deal–could come in to test Higashioka’s mettle. They could also potentially be stashed in AAA if the kid falters come April or May. If everyone fails, they may or may not still have Brian McCann on the roster and, although I hope he’s the full time DH, he’s still a very good catcher himself.

The point I’m trying to make is that the Yankees are all about giving the kids a chance–the New World Order, as I have dubbed it. They know what they have in Austin Romine, and it’s not that good. They could have a much better, and cheaper, option in Higashioka, and I think they should throw him in there and see what he can do.