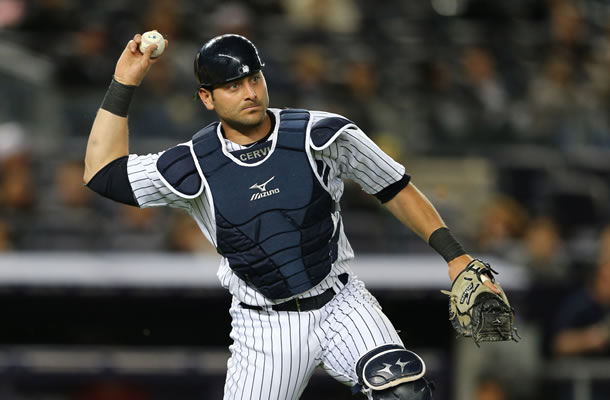 First Mariano Rivera. Then Derek Jeter. Now… this?? OK I’m kidding, but news did break late last night that the Yankees have traded Francisco Cervelli to the Pittsburgh Pirates for a lefty reliever named Justin Wilson. Is this a good deal for the Yankees? Let’s investigate.

First of all, let’s talk a little bit about what Frankie has meant to this team. They signed him back in 2003 as a 16 year old (just a few days shy of his 17th birthday) amateur free agent out of Venezuela. He made his Yankees debut as a 22-year old September call up in 2008, and became a regular, or semi regular, part of the team for the next six seasons. For the most part, he was the Yankees primary backup catcher (except for that one year where the Yankees screwed him over in favor of Chris Stewart), hitting .278/.348/.381 with 10 home runs in 250 games and 688 ABs.

Wilson, the lefty reliever the Yankees got back in the deal, was drafted by the Pirates out of Cal State Fresno in the fifth round of the 2008 draft, and made it to the Show by 2012. He quickly developed into a very good reliever, posting a 2.08 ERA in 58 games in 2013. Last year, however, the 27-year old lefty regressed a bit, struggling more with his control (30 walks in 60 innings) and posting a 4.20 ERA. He did boost his strikeout rate from 7.2 K/9 to 9.2, so that’s an interesting twist. According to the scouting report, he sits in the mid 90s with his fastball, which he throws almost all the time, and also features a two-seamer and a cutter. The main comparison people seem to be making is one to former Yankees LOOGY Boone Logan.

Wilson will fit in nicely in the Yankees bullpen for 2015 and beyond.

On paper, I think this is a great trade by Brian Cashman. I love the enthusiasm and Joie de vivre that Cervelli brings to the team. Beyond that, he has improved both his offensive and defensive game immensely since the Yankees sent him down back in 2012. That being said, he has been on the disabled list pretty much every year of his career, dating back to before he was even on the big league club. There was the fractured wrist in Spring Training 2008 (remember the hullaballoo with the Rays after that one?); the concussion in 2010; the concussion during winter ball following that season; the broken foot in Spring Training of 2011; the broken hand on a catcher’s interference call in 2013; the ensuing 50-game PED suspension and, finally, the hamstring injury in April last year. Wowsers. What helps make this deal much more acceptable is that, no matter how talented or enthusiastic Frankie is, he can’t help the team if he’s not on the field, and he can’t seem to stay healthy.

Let’s keep in mind that Wilson has four years of team control left on his contract, which is a big bonus. If he is, indeed, the next Boone Logan, then that makes this trade even better. When the Yankees got Logan in the Melky Cabrera deal prior to the 2010 season, did anyone think he would become a staple of the middle of the Yankees’ bullpen for the next four seasons? He had never posted an ERA lower than 4.97 in the majors before that, but he ended up pitching 256 games with a 3.38 ERA for the Yankees. If Wilson, who seemingly has a similar makeup and pitch repertoire to Logan, can provide that kind of performance, this trade will be a slam dunk.

We also have to think about the roster crunch as it relates to this trade. The Yankees have an extreme surplus of catchers, not just in the system, but on the actual 40-man roster. Of Gary Sanchez, Kevin Romine, John Ryan Murphy and Cervelli, I’d probably get rid of Romine first, but with his trade value, the Yankees would have been lucky to get back Carnie Wilson, let alone Justin. I still think the Yankees have more catching moves to make, but this is a good start. Cervelli holds the most trade value of the expendable players, but his value to the club isn’t so high that Murphy (or a cheap free agent catcher if the Yankees move Murphy too) couldn’t step right in and provide replacement value performance for the club. Getting back to Sanchez, this trade also moves everyone up one notch in the minor league depth chart, which opens up a starting spot for the latest “catcher of the future” in AAA Scranton/Wilkes-Barre. That puts him one step closer to the Bronx, which is awesome.

Murphy stands to benefit most from this trade.

This trade is actually pretty great for Frankie too. He moves on to the Pirates, where he bascially jumps to the top of the depth chart (assuming they don’t re-sign Russell Martin) ahead of Stewart and Tony Sanchez. If he can stay healthy, and has the type of season that his improved performance suggests he could have, he could be in for a nice pay day when he becomes a free agent following the 2015 season. Also, at least the Pirates are good. He didn’t get traded to the Twins or anything.

This is a win/win trade for all parties involved, and I’m glad Cashman pulled the trigger. I’ll miss Cervelli’s personality and enthusiasm, but the Yankees are better for having made this deal. I think you guys should sit back and enjoy a nice highlight from Frankie’s time in New York.