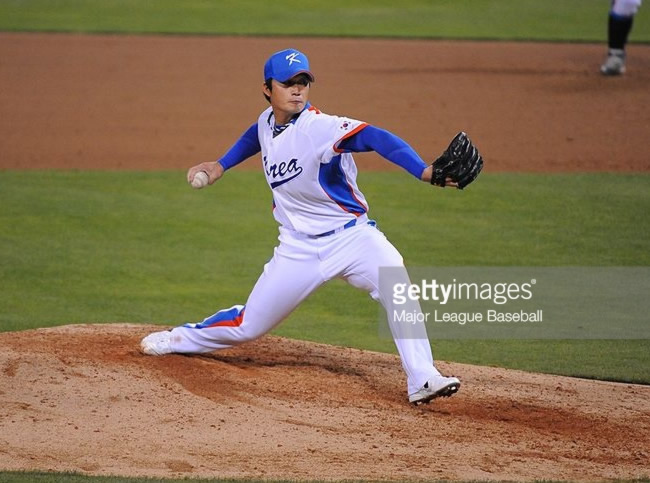 Bowser. Ganondorf. Sephiroth. Doctor Robotnik. Diablo. Mike Tyson. What do all of these names have in common? Clearly, they are some of the most heralded, and toughest, final bosses in video game history. Why am I writing about these guys in a post about a potential free agency target for the Yankees? Because Seung-hwan Oh of Korea has one of the best closer nicknames in the history of the game. So, will the Yankees pursue “The Final Boss?” Based on his nickname alone, I sure hope so.

Realistically speaking, perhaps Oh could actually help the Yankees in 2016, and potentially beyond. Last season, the Yankees showed that having two elite relievers at the end of the bullpen (Dellin Betances and Andrew Miller) but only one other reliable guy to bridge the gap (Justin Wilson) is not enough to be comfortable once the starters leave the games. I know certain guys had good runs (Chasen Shreve), but by the end of the season, Betances was exhausted, and Joe Girardi seemed unsure of who to go to if the starters got chased early. That’s not a knock on Joe, but rather a reflection of the state of his pen.

One of the big problems last year was that the Yankees had approximately one thousand rookies in the bullpen. Caleb Cotham, James Pazos, Nick Goody, Nick Rumbelow, Diego Moreno, Danny Burawa, Jose De Paula, Jacob Lindgren, Branden Pinder and Matt Tracy all make their major league debuts as relievers. That’s ten guys with no big league experience that ended up being used in big league games. It’s tough to manage a pen when you have to rely on inexperience so much, and if there’s one thing that Oh has, it’s experience.

He might not have big league experience, but Oh’s career spans eleven seasons; nine in the Korean Baseball Organization and two more in Japan. He also twice represented Korea in the World Baseball Classic (2006 and 2009). He has been a closer pretty much from the very beginning, and has racked up 357 saves and a 1.81 ERA in 571 appearances. To say that he’s ready to try his hand at the big leagues is a bit of an understatement. He’s proven all he can prove in Asia. He’s coming off of a very successful season with Hanshin, with whom he signed prior to the 2014 season. In 63 appearances for the Tigers, he saved 41 games with a 2.73 ERA, a 1.154 WHIP, only 2.1 BB/9 and 8.6 K/9. He believes, and I would have to agree, that he’s ready.

According to MLBTraderumors, his fastball, which also has a cool nickname (“Stone Fastball”), sits at 92-94 mph and has been known to reach 97. His secondary arsenal features a slider that’s anywhere from 80 to 89 mph and a curveball that he throws in the 70s. Sounds pretty good, right? Even better, Oh is a free agent, meaning nobody has to deal with any posting fees if they want to sign him. If the Yankees want this guy, all they have to do is offer him the most money.

It’s not all peaches and cream for Oh, though. Like any other pitcher on the market, he’s got some stuff working against him as well. For one, that 8.6 K/9 rate he put up last season was the lowest of his career. The competition is definitely better in Japan than in Korea, but could that be a sign that he’s starting to fade? After all, he’ll turn 34 in July, and is no spring chicken. Size could also be a concern. Oh is only 5’10”, packing 200+ pounds onto a smallish frame (that’s earned him another good nickname in Japan, “Stone Buddah.” Two cool nicknames? Are you kidding me?). That could, in the long run, work against him, as smaller pitchers tend to have shorter shelf lives in baseball. Also, he clearly wouldn’t fit in in the Yankees bullpen of giants. Maybe he could play PG on their pickup basketball team?

The injury front isn’t that great for Oh either, as he’s also gone through two Tommy John surgeries in his career. The first came when he was in college (2001), and the second was in 2010, which probably explains why he missed the 2012 World Baseball Classic. That being said, he returned from that second surgery and put up his best KBO season, so what do I know? Also, elbows come and go. Shoulders are a bigger concern, and he’s never had any shoulder issues.

Obviously, Oh is a bit of an unknown commodity. I’m not saying the Yankees need to go out and sign him, but he’s coming to the United States to work out for some big league teams, and the Yankees should be all in on that. They should kick the tires and watch him throw. If he looks good, they should consider bringing him in. The Yankees have never had a Korean player on the team (other than Rob Refsnyder, but he was raised here for pretty much his whole life), and I think expanding the brand to Korea, while bringing in a talented arm to help Joe Girardi not get himself fired, could be a nice deal for everyone involved. I don’t anticipate that Oh will get more than a one or two year deal and a handfull of millions, so why not?