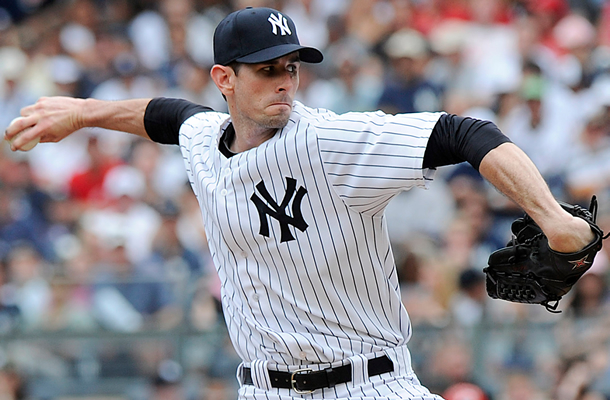 When the Yankees traded Vidal Nuño to the Arizona Diamondbacks for struggling veteran right-hander Brandon McCarthy, I had very “meh” feelings about it. Nuño had shown that, despite a good outing here and there, he did not have the physical stuff to pitch in Yankees Stadium. McCarthy, who is scheduled to start tonight in the series opener against the Tigers, had been a very solid major leaguer in the past, but, at 30 years of age, was pitching horribly in Arizona. I thought to myself, “maybe this will be one of those ‘lightning in a bottle’ type trades.” Boy was it ever. McCarthy is suddenly the ace of the Tanaka-less Yanks, and has most of New York pining for the Bronx Bombers to bring him back next year. Should they do it?

First of all, let’s compare the numbers from McCarthy’s time in Arizona to those during his time with the Yankees. In 18 starts in the desert, the 6’7 inch righty was 3-10 with a 5.01 ERA. He had also allowed 131 hits and 15 homers in just 109.2 innings. Since the trade, he’s been a completely different pitcher. In 8 starts with the Yanks, Mccarthy is 5-2 with a 1.90 ERA and a 1.135 WHIP (it was 1.377 in AZ). He has also only allowed 7 walks while striking out 51 opponents in 52 innings. Like I said, completely different. He has helped stabilize a Yankees rotation that is reeling from injuries, which is saying a lot.

What the Yankees need to decide, is whether his new found success is a return to normalcy, or simply an anomaly that will not carry on further than this year. One thing to note is that the Diamondbacks had told McCarthy to stop throwing the cutter, while the Yankees told him to throw whatever he wanted. The Yankees are no strangers to cut fastballs, so this makes sense. It would also make sense if McCarthy’s performance dipped after being told to trim down his arsenal. I think the fact that he’s now in a pennant race probably has a lot to do with his rise as well. That being said, it’s not like McCarthy is suddenly good after a mediocre career, like Aaron Small and Shawn Chacon in 2005. This is a guy who has always struggled with injury, but never really with results over the last five or so years.

If they decide that McCarthy is someone they need to bring back, then the Yankees have to see what it will take to do that. With McCarthy’s age and injury history, I don’t think it’s ridiculous to think that they could get him on a two or three year deal for somwhere in the $24MM – $36MM neighborhood. I think $12MM per year for a guy with a good pedigree would be a great deal if he can stay healthy. At this point, the Yankees are looking at a scary 2015 rotation, and I don’t mean that in a good way. They don’t know what they’ll get out of CC Sabathia. Masahiro Tanaka might tear his elbow fully at any moment. Iván Nova is coming off of Tommy John surgery, and probably won’t be available until mid season at the earliest. Shane Greene has been pretty great in his rookie season, but there’s always the threat of the dreaded Sophomore slump. Finally, Hiroki Kuroda is probably going to retire, or at least leave the Yankees. A veteran who has shown the ability to pitch in the Bronx, albeit for a short time, is something they shouldn’t take for granted.

I say bring him back.

One thought on “Should the Yankees Bring Back Brandon McCarthy?”