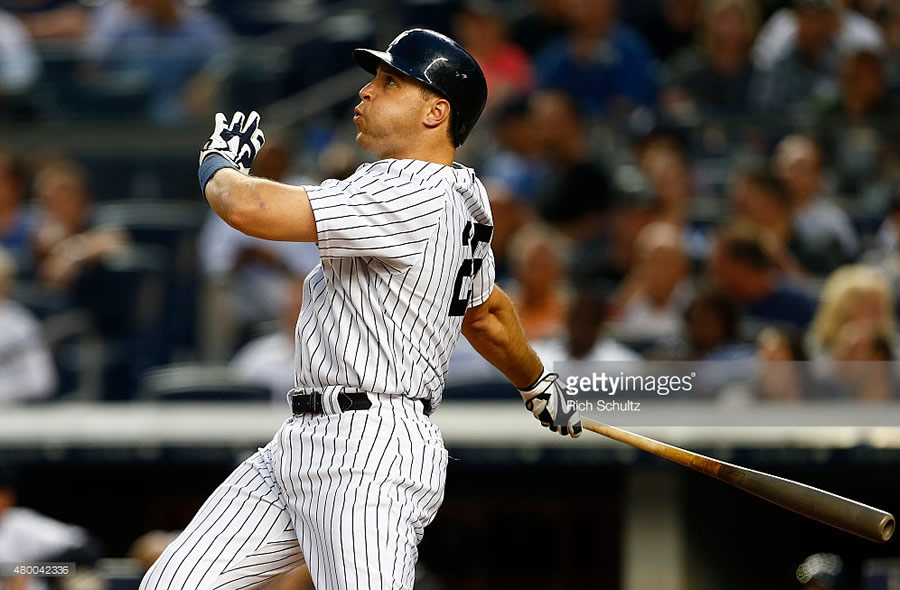 After Mark Teixeira got off to a curious start in April, I wrote a post about it for Pinstripe Alley. In that post, I focused on how qualifying Tex’s 2015 season was odd because he was hitting .204, but had slugged five home runs and driven in 13 runs in just 15 games. I also mentioned how I never expected him to keep it up. Well, he’s shown me so far. The night my post went live on Pinstripe, he hit two home runs against the Mets, and he hasn’t stopped since. So, considering his contributions to the team, should he be considered for the MVP award?

First of all, let’s break down the stats for the 35-year old First Baseman, who will be making his just his third All-Star Game appearance next week. Through 79 games (85 team games), Tex is hitting .244/.355/.542 with 22 homers and 62 RBI. To put this in perspective, he had the same number of homers and RBI in 2014… in 123 games. He also already has more doubles than he did last season, and has even matched his stolen base totals from last year (OK I know he only has one stolen base). If you need further evidence, his batting average is up 28 points from last season, his on-base percentage is up 43 points and his slugging percentage is up a remarkable 148 points. For you more advanced stat heads, his OPS+ is now a meaty 146, where it was just 99 last season (not good at all for a supposed slugger), and he’s also nearly tripled his WAR from 2014 (2.7 to 1.0). One more: his ISO is currently sitting at .298, which is A, ridiculous and B, 116 points higher than last year. So… yeah. He has improved.

Remarkably, after an off-season during which he changed his diet to a gluten free plan in order to focus on cutting down inflamation in his body, Tex is mashing like he did at the beginning of the eight-year deal he signed in 2009. Thankfully, this resurgence has come at a time when the team has really needed him. Jacoby Ellsbury, Carlos Beltran and Chase Headley, have all missed time due to injuries. For some reason, the team refuses to cut ties with Stephen Drew, who is hitting well under .200 now three months into the season. The Yankees have leaned very heavily on three guys this season: Teixeira, fellow All-Star Brett Gardner and the also rejuvenated Alex Rodriguez, who some claim should also be joining the other two in Cincy next week.

The other day against the Athletics, Teixeira had a game that pretty much sold me, not just on the validity of his selection to the American League All-Star team, but also to the idea that he might just be in the running for MVP too. He tied the game at 2-2 with a solo home run off of Evan Scribner in the fourth, homered again off of Scribner to extend the lead in the sixth and made several amazing plays in the field throughout the night, including a great scoop on the last play of the game (watch the video below). Although Drew hit the home run that represented the eventual winning run, the Yankees wouldn’t have won that game without Teixeira. If I think back throughout the season and look through some boxscores, I know there will be other games that I could say the same about. The plain fact of the matter is that the team wouldn’t be in first place right now without Mark Teixeira.

Because of all that, there’s no doubt in my mind that he’s the team MVP right now (sorry, Gardy). Sure, there’s the annual Mike Trout vs Miguel Cabrera debate currently going on (Cabrera is injured, but hitting .350, and Trout is just being Trout), and there’s a couple other guys you could throw in the mix, but let’s not forget the switch hitting, tater mashing, throw scooping, gluten avoiding, wheeling dealing, high flying, limousine riding sonofagun (Wooooooo!) when the time comes to give out the league edition of the most prestigious award in the game… #TexForMVP

2 thoughts on “Should Mark Teixeira Get MVP Votes?”