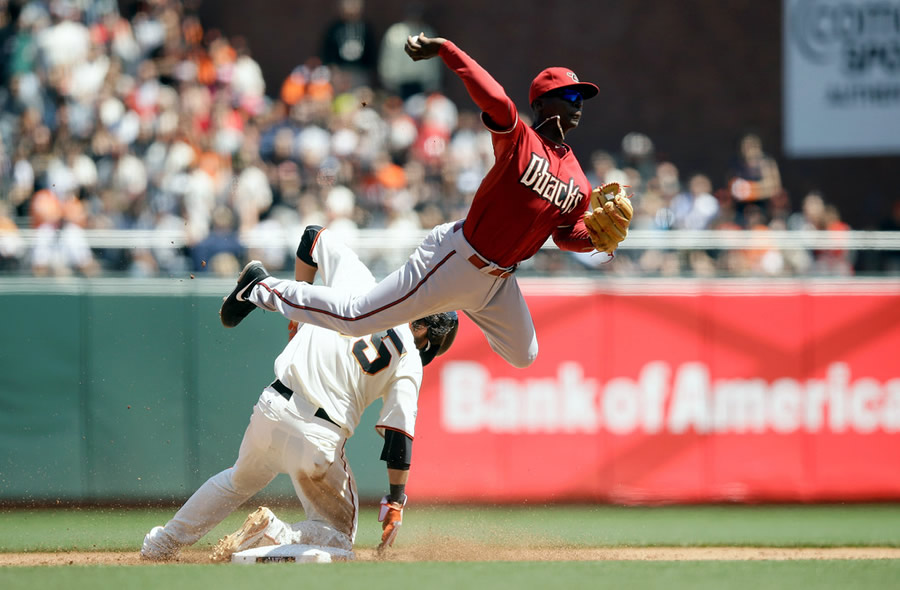 All off-season long, we’ve been wondering what the Yankees were going to do about the sizable hole left at Shortstop by the departure of Derek Jeter. Some have been saying they need to bring back Stephen Drew on a cheap one year deal. Other options included overpaying for guys like Asdrubal Cabrera or Jed Lowrie, or just eating the shit and letting Brendan Ryan take Shortstop for the year. My hope was that they would trade a young pitcher for a young Shortstop. They did just that today, partaking in a three team deal that sent 2014 rookie righty Shane Greene to Detroit, left hander Robbie Ray and infielder Domingo Leyba from Detroit to Arizona, and Didi Gregorius from Arizona to the Yankees. We’ve found our next Shortstop, folks. let’s get to know him a bit.

We actually spoke about young Didi all the way back in 2013, when I wrote up a Rookie Spotlight piece on the kid shortly after he homered off Phil Hughes in his first at bat of the season. Here’s the scouting report on Gregorius. The Dutch international, will be 25 on opening day, and won’t be a free agent until 2020. He won’t even be arbitration eligible until after the 2015 season, so he’s very affordable right now. Gregorius is rated as an above average to elite defender, and has shown some promise from the left side of the plate. He did take a step backwards at the plate last season, hitting .226/.290/.363 in 2014 after hitting .252/.332/.373 during his rookie campaign in 2013, but he bounced back well in the minors, hitting over .300. He doesn’t have much power, but does make up for it with a little speed and line drive ability, so that’s good.

Let’s now make the unfair, yet obvious, comparison: how does Gregorius compare to Derek Jeter? First of all, I’m already tired of the headlines I’m reading saying that Gregorius is Jeter’s replacement. Jeter retired. He’s not being replaced. The Yankees just need a new Shortstop. They weren’t going to play without a Shortstop in order to preserve Jeter’s memory, so let’s all shut up about the world “replacement.” The last thing this kid needs is Jeter comparisons, because that’s an impossible image to live up to.

That being said, let’s talk about 2014 Derek Jeter, as compared to 2014 Didi Gregorius. Jeter was fairly putrid last year both at the plate and in the field. Look at the photo at the top of this post. When’s the last time Jeter was in the position to have a photo snapped of him in that pose? I can’t even remember. I’m pretty sure if he had tried it last year, he would have died. Literally. According to the scouting reports, Didi’s defensive abilities dwarf that of Jeter’s, even in the Captain’s prime. That’s a big win for the Yankees, who had awful infield defense in 2014. At the plate, Jeter outhit Gregorius .256 to .226 last season but, if you dig a little deeper, Gergorius out-slugged Jeter .363 to .313. The kid had 20 extra base hits in 80 games, while Jeter only managed 24 in 145 games. There’s little doubt in my mind that Gregorius can bounce back to out-perform Jeter at the plate, even if he can only hit .240. Let me just reiterate this one more time. Jeter was awful in 2014. The Yankees had 145 games of well below replacement level production on all platforms last season from their Shortstop. In my opinion, this trade makes the team better in the field and at the plate, although I know Gregorius’ intangibles don’t compare to the Captain’s.

Let’s now talk about Shane Greene, and how dealing him will affect things, because that’s the other side of this story. First of all, The Yankees now absolutely need to add pitching. Greene kind of came out of nowhere last year and became a legitimate help at the big league level for a rotation that was completely decimated by injury. After a somewhat mediocre minor league career, Greene made his big league debut last year, basically because everyone else was hurt. He made 14 starts, finishing 5-4 with a 3.78 ERA, and an impressive 9.3 Ks/9, although his WHIP was a bit high at 1.398. He helped stabilize a rotation that often included guys nobody ever expected to be pitching for the Yankees. I know he wasn’t much of a prospect before last year, but the kid pitched his ass off, and most fans were counting on him for the 2014 rotation. The Yankees just took another pitcher away from a rotation that is already on the verge of injury related disaster, which means they now have to get involved with some free agents, or other trades, to bring new arms into this rotation.

On the surface, if you ignore the rest of the roster, this is a great trade. They took a young pitcher and flipped him for a young Shortstop, filling a major major league need. The Yankees have added a cost-efficient young player with room to grow and lots of years of team control left, and now don’t have to go out and spend millions on a mediocre free agent to take over for Jeter. However, if they don’t make any further moves to improve the rotation this off-season, then this trade will eventually come back to haunt them. I think it’s important to let the off-season play out to see what other moves Brian Cashman makes before we judge this trade on anything other than the player-for-player swap. Maybe this frees Cashman up to spend some money on a Jon Lester, or Max Scherzer. I think the Yankees need to add two new arms now, so maybe we’ll get a very merry Christmas in the Bronx, and we end up with both guys. I know that’s unlikely, but it’s clear the Yankees now need to bring in some arms. Let’s see what they do at next week’s winter meetings. For now, welcome Didi!