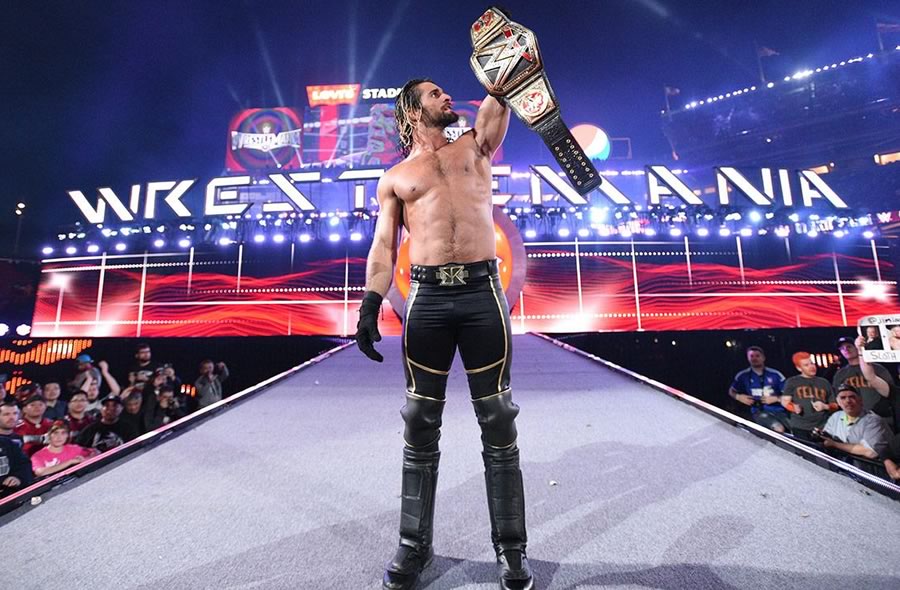 Heading into Wrestlemania 31 from Santa Clara, one of the big fears held by “smart” fans like us was that Brock Lesnar would lose, and we’d end up with a new WWE World Heavyweight Champ in Roman Reigns. In the end, we did get a new WWE champion, just not the one we anticipated, and it was friggin’ awesome. After a surprise twist, it was Reigns’ former Shield brother, Seth Rollins, who walked out of California with the giant belt, capping of a great Wrestlemania with a great main event moment.

Let me first get something out of the way. For months leading to this event, WWE fans took to the internets to complain about how the company was pushing 29-year old Roman Reigns. Frankly, I think it’s a bit ridiculous how fans turned on Reigns to begin with. He, along with Rollins and Dean Ambrose, won our hearts a couple of years ago as the Shield. It was a sign that the company was pushing new stars, which is precisely what everyone was clamoring for. Reigns, Rollins and Ambrose became “our guys,” and their popularity grew fairly organically because they were awesome. However, as soon as Daniel Bryan got hurt and WWE picked Reigns as “their guy,” fans peed in their own cheerios and started booing him. You either want a new star, or you don’t, so don’t be annoying about it. OK, rant over.

Anyway, onto the main event. This was definitely one of the better main events of recent Wrestlemanias. Not only was it an exciting match with great spots, a big twist and an exciting ending, it also accomplished three main things. First, it actually got fans cheering for Roman Reigns. The story they chose to tell was this: Reigns knew he was going into this match to get the ever loving shit kicked out of him, and he was ready for it, and willing to take it. I think the turning point for me, as far as respecting Reigns, was when, in the middle of getting taken to Suplex City by Lesnar, he smiled through bloody teeth and almost laughed, as if he was saying “wow. I really am getting my ass kicked, and you know what? I can take it.” It was like Rocky Balboa yelling “You ain’t so bad!” at Clubber Lang to piss him off and get in his head in Rocky III. It’s basically a metaphor for Reigns’ situation with the fans, who have been booing him for months. He fought through the beating, and the boos, in this one and looked great. In the fans’ eyes, he earned a couple of stripes in that match.

Secondly, Lesnar was never pinned, and he was made to look like an absolute monster by the final few moments of the match. He withstood three Superman Punches and two of Reigns’ spears, kicking out before nailing an F5 on Reigns, which left both superstars incapacitated. Ever the opportunist, Seth Rollins, who had lost earlier in the night to Randy Orton, picked that moment to run down and cash in his Money in the Bank briefcase, turning the main event into a triple threat match. With Reigns totally out of it, Rollins hit a Curb Stomp on Lesnar. He went for a second finisher on the beast (because you can’t beat Lesnar with one finisher), but it was reversed, and Lesnar put him in position for an F5. At this point, Reigns came to and hit Lesnar, who had Rollins on his shoulders, with one of the better spears he’s ever hit on anyone. Lesnar was completely incapacitated, and Rollins, who landed on his feet after the spear, took advantage of a distracted Reigns to hit him with the Curb Stomp for the 1, 2, 3. Not only did this finish build Reigns up and keep Lesnar strong, it accomplished the third thing, which was to elevate Seth Rollins and create multiple storyline threads for the coming months.

There are now three people who have a legitimate beef with Rollins and could conceivably challenge him for the belt. Lesnar was never pinned, and he dominated that match, so he’s going to want his shot. Reigns is going to feel like he had the match won, and Rollins stuck his nose where it didn’t belong and robbed him of his chance to win the belt. Finally, Orton beat Rollins earlier in the night with one of the most ridiculous RKO Out of Nowheres™ I’ve ever seen, so he can say he should be getting a title shot too. This also sets up a potential Paul Heyman vs Stephanie McMahon promo feud on behalf of their guys (Heyman with Lesnar and Steph and the Authority with Rollins), which is a giant win for everyone involved.

Look. The build for this Wrestlemania was absolutely terrible, but Vince and the gang really delivered from bell to bell on Sunday night. Was it perfect? Did every result make sense? Absolutely not. But was I fully entertained all night and did they provide a tremendous main event and finish? You know it. OK kids, that’s all for now, but we’ll have more coverage from both Gordie and me as the week rolls on, especially when we see how RAW settles all the dust. Congratulations to Seth Rollins, and the WWE. Great show.