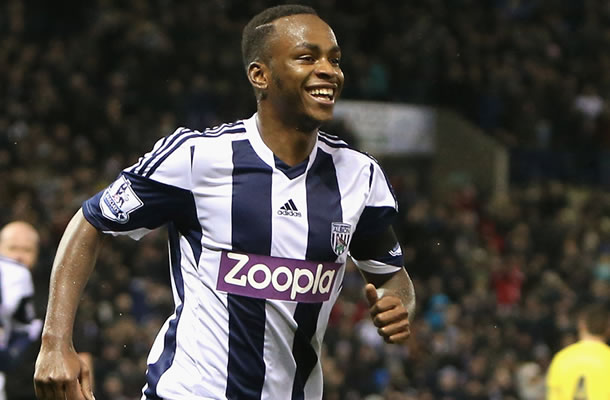 Congratulations to West Bromwich Albion Striker Saido Berahino, who has been called up to the English national team for the first time. England is a team in much need of offense, and they’re hoping Berahino can provide a bit of a spark for their upcoming Euro-qualifier against Slovenia next weekend. Let’s get to know a little more about the 21-year old attacker.

First of all, Berahino’s story does not begin in England. In fact, it begins more than 4,000 miles away in the tiny African nation of Burundi. At the age of 10, he traveled by himself to England to join his mother and siblings as refugees from the horrible civil war that was plaguing his native country and had even taken the life of his father. Although he spoke no english, his football talent spoke for itself, and he was soon signed into West Brom’s youth academy system.

He started his senior career as an 18-year old in 2011, playing on loan with Northampton Town of League 2 (14 games, 6 goals), Brentford of League 1 (8 games, 4 goals) and, after making his West Brom debut in August of 2012, Peterborough United of the Championship (10 games, 2 goals). During the 2013/2014 season, he was finally given an extended chance at his home club, playing in 27 games (11 starts) and scoring 5 goals for The Hawthornes. Along the way, Berahino also played for just about every level of England’s youth clubs, starting with the U-16 in 2009.

Berahino tussles with Nico Schulz of Germany at the U-16 level for England.

By the time the 2014/2015 season rolled around, Berahino had solidified his place at the front of the West Brom offense. The stability seems to have helped his confidence, which, along with his hard work and natural development, has made him quite the commodity in the early going of this season. Through 10 games (all starts), the kid has scored 7 goals, and easily caught the attention of England coach Roy Hodgson, who said Berehino might have actually been selected last month if the England U-21 team, for which Berehino has scored 3 goals this year and 10 in his career, hadn’t been in the European Championship playoff at the time. Now that the U-21 team schedule isn’t stopping him, Berehino could well become the first West Brom Striker to play for England since Cyrille Regis did it way back in 1987.

“Everything he’s done since the start of the season; not just for West Brom, but also for our Under-21 team, I think he’s been a key figure. I think he’s broken into the West Brom team and maintained his place there despite the fact that they spent a lot of money on another Striker, Brown. He’s been able to keep his place. He’s scored goals, albeit a number of them are penalties, but still he’s scored goals. And even taking penalties shows a degree of maturity and confidence that we appreciate.”

It’s clear that people seem to think Berhino has a bright future for both club and country. It will be interesting to see if he can translate his early Premier League success into a chance to actually get on the pitch, and what kind of impact he will have on England if he does. Congratulations, Saido!

Here are the rest of the England hopefuls, for those of you who are curious.