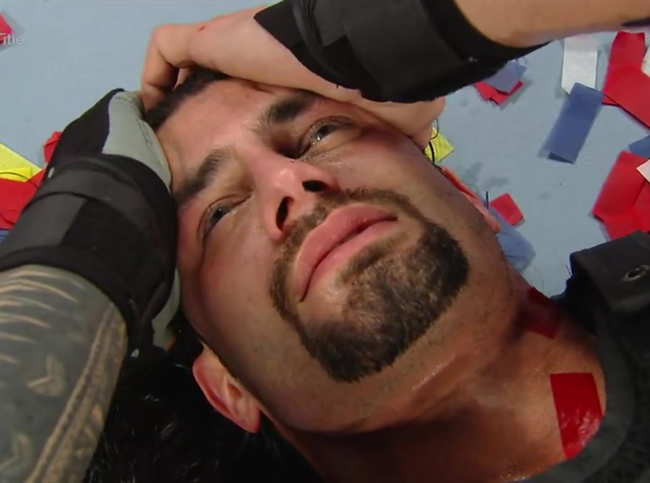 In case you guys didn’t watch last night, Roman Reigns (as I predicted), won the WWE World Heavyweight Championship tournament after squaring off against his best buddy, Dean Ambrose, in the finals of the championship tournament. Unfortunately, he bit the hand that feeds him (well, he speared the torso that feeds him), and ended up losing the belt amidst a sea of the confetti used to celebrate his win. Is this the right move? Let’s talk about it, because the Internet Wrestling Community (IWC) is in a bit of a tizzy right now.

In the weeks leading into the show, you got the feeling that WWE was clearly pushing for the final to be Reigns vs. Ambrose. Personally, I think that is the best story they could potentially have going for the belt out of the guys in the tourney. Two best friends fighting for the belt, less than two years after seeing their other alleged best friend stab them both in the back for a chance to chase that very same belt? Sign me up. Going into the finals match itself, I was hoping one of the two would turn heel. After all, with Seth Rollins gone, WWE is short one top bad guy, and bad guys make much better champions. With HHH looking for his new corporate champ, it would have made sense to break up the Dean and Roman friendship.

In hindsight, I realize that turning Ambrose or Reigns heel would basically be a repeat of the Rollins situation. Not that friend turning on friend hasn’t been done to death (it’s basically what professional wrestling is built on), but doing it with the same group of guys, and the same authority figure pulling the strings, would have been a bit too repetitive. Instead, what WWE decided to do was to have Reigns go over, as everyone thought he would, but then have HHH pull the rug out from underneath him like the dastardly bad boss that he is. Oh, you don’t want to be the Authority’s champion? Now you don’t get to be champion at all! Eat poop. Eat a big pile of poop. I don’t think anyone can really argue with that move there. A, everyone hates Roman Reigns, and B, it’s just what evil HHH would do. He’s a jerk, and we love to hate him for it. 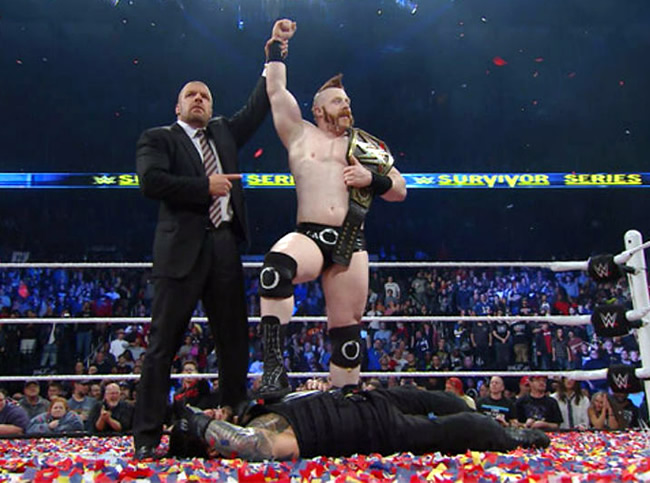 Is Sheamus the right guy for this though? This is a question over which I could see people getting angry with each other. What has Sheamus done since winning the Money in the Bank ladder match in June? Literally, nothing. He’s just been a big Irish doofus with bad facial hair putzing his way into loss after loss. Hell, he even lost in embarrassing fashion earlier in the night, as part of a throw-away five-on-five traditional Survivor Series match. In that match, he was abandoned by his tag team partners, The New Day, and defeated handily by the likes of Kalisto, Ryback and Jey Uso. Why would anyone ever think the WWE would put the belt on him after all that? Ah haaaaaa! We wouldn’t! That’s why the move makes sense. HHH you diabolical!

First of all, the Sheamus character has been dying a slow death since he won the MITB briefcase, and this might have been the only way to save it. Nothing will boost a heel character quite like becoming the champion. Sheamus is already obnoxious, imagine him with the belt now! Also, there’s no denying that, no matter how much he’s lost the last few months, or how embarrassed he got earlier in the night, when you look at Sheamus you think he could realistically beat anyone on the roster not named Brock Lesnar. He’s huge, mean and for better or worse, has a very unique look. The fans already give him shit for his facial hair, imagine how many “YOU LOOK STU-PID” chants he’ll get now, and how extra disrespected he’ll feel now that he’s champ! Also, how badly does HHH want to keep Reigns out of the top spot, that he has stooped as far as backing a guy who has struggled as much as Sheamus? What an evil prick!

After years of trying to force Roman Reigns down our throats, it’s clear that the WWE has changed it’s position on him. No, I don’t think they’ve given up on him as a potential top guy. What’s clear now, is that they want to build him up as an underdog. While he might not be as small as a Daniel Bryan, WWE knows that if you fuck with a guy’s life enough, the fans will eventually root for him to get one over on the evil people in charge. It worked for “Stone Cold” Steve Austin; it worked for Mankind; it worked for CM Punk and it sure worked for Daniel Bryan. I thought Reigns did a great job selling just how distraught he was after his loss, and he even shed some real tears in there. For a guy who can’t talk on the mic, he did a lot with no words in the middle of the ring last night. Nobody should be making a grown man cry in the ring out there, HHH. You’re going to get yours!

I, for one, look forward to the fallout tonight on RAW. As my buddies and I kept exclaiming throughout the show, there were very little shenanigans during Survivor Series (other than the Sheamus thing), so I really hope we get some tonight. For one, Sheamus better come out with the Authority, and wearing a suit. It’s the only way.