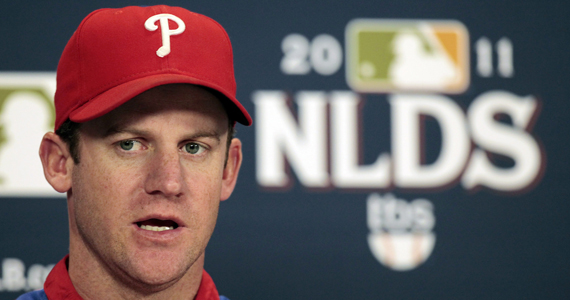 Jobu takes a look around the league to what teams are doing to spark their rotations and lineups.

Today, the Rangers announced that they had come to a contract agreement with Roy Oswalt for the rest of this season. The deal will guarantee him $5MM for the rest of the season, and gives him the opportunity to earn another $1MM in incentives. When you compare it to the deal Andy Pettitte got from the Yankees (2$MM for probably 1-2 months more major league time), it seems like a little much, but I guess he didn’t spend a year in retirement. Anyway, the Rangers aren’t the only team taking a chance on an aging veteran in the hopes of boosting their stock.

The Tampa Bay Rays announced today that they are calling up Hideki Matsui to try to help their struggling offense, and the A’s are looking to bring up Manny Ramirez soon for the same purposes. When you add Pettitte and Johnny Damon (Cleveland) to the mix, there’s quite a lot of veterans trying to make an impact on one last pennant race. So who will end up having the most impact on their teams? I’ll list them in the order of least to most impact, just to build the suspense.

It was kind of a tossup between Matsui, Damon and and Manny, but I had to go with Hideki Matsui here. While the Rays have the best team potential out of the three, I just don’t see Hideki having any kind of impact on anything this season. He last played for Oakland last season, and he was so bad that they didn’t even want him back. Oakland doesn’t exactly have a hitter’s ballpark, but his numbers were extra terrible. He ended up playing 141 games for the A’s, compiling a slash line of just .251/.321/.375 (all career lows) and his twelve home runs were his lowest total for a season in which he was not injured. He signed with the Rays on April 30th and, in his trip up the minor league ladder, he managed to hit only .170/.231/.213 with 0 home runs in thirteen games. If Hideki can’t even get around on AAA pitching, I don’t see how he could possibly help out the big club. Don’t be fooled by the home run he hit in his debut last night. He’s always had a flair for the dramatic. I predict he’ll be released by August, and will announce his retirement shortly thereafter.

We’ve covered Manny Ramirez extensively on this blog, although not since it was announced that his suspension had been cut in half by MLB. In Manny, the A’s are getting one of the best, and most feared, hitters in the history of the sport… in his prime. Unfortunately for them, Manny is no longer in his prime, and he’s (probably) not on steroids anymore. At 40 years old, what does Manny even have left? When he retired (aka ran away to avoid suspension) in April of 2011, he wasn’t exactly raking the ball. After a ho-hum spring, manny was just 1-17 in the first five games of the year. It was a very small sample, but Manny didn’t look like he had much going on. Now he’s another year older, and another year removed from using steroids (we hope). He has played in just nine games for Oakland’s AAA affiliate since he finished serving his suspension. Truth be told, he’s been better than Matsui. That’s about all I can say. In 32 ABs, Manny is hitting .250 and has yet to leave the ballpark with any of his swings. I don’t think he’ll be a huge revelation for the A’s. He’s not going to take them from third to first. He’s probably going to hit a few home runs and put some butts in the seats with his silly antics, which is a lot more than I am willing to say for Matsui.

Johnny Damon has spent the most time in the bigs out of all of these guys so far this year, but it hasn’t been pretty. In 22 games through Monday, Damon has hit a paltry .152/.239/.228 and only has three extra base hits (one of each kind) to show for his hard work. When you consider the fact that Johnny is a terrible defender and shouldn’t be playing anywhere near the outfield to begin with, he should probably start hitting soon if he wants to keep his job. That being said, I think Damon can bring a lot of intangibles to a young team. He knows how to win, and his winning attitude and veteran leadership could very positively influence this young Indians clubhouse. As things stand, the Indians are just a half game out of first place. I’m not going to credit Johnny Damon with the franchise turnaround, but I’m sure he helps.

There’s really not much to say about Andy Pettitte that I haven’t already written about in several posts this season. Through four starts, Andy is 2-2 with a 3.49 ERA (after last night’s loss in Anaheim). While those may not seem like season changing numbers, I really can’t imagine where the Yankees would be without Pettitte. If the playoffs were to start right now (and the Yankees had a good enough record to make the playoffs), Andy Would be my number two starter. This is a guy that hadn’t played baseball in over a year. He’d been home, retired with his family. What he has been able to do in his comeback attempt so far is nothing short of remarkable. If the Yankees make the playoffs and possibly win a championship this season, it will have a lot to do with Andy Pettitte.

The Texas Rangers have made it to the World Series two years in a row. In 2010, they came up just short against the San Francisco Giants and their ridiculous pitching staff. Last season they twice came within an out of winning the whole thing, but a cinderella St. Louis Cardinals team ended up on top. This season, they let their ace C.J. Wilson go, moved their closer into the rotation, and signed possibly one of the best international free agents in the history of the game in Yu Darvish. Because of the fact that the Rangers have one of the best offenses, and one of the best bullpens, in the game, their rotation has been the only missing piece in their consecutive World Series runs. Letting Wilson go must not have been easy, but they’ve done a great job of replacing him. Roy Oswalt has the potential to put them over the top and finally get them over the hump. That being said, Oswalt is no sure thing. His historically bad back held him to just 23 starts, and he didn’t pitch like the ace he was when the Phillies acquired him for the stretch run in 2010. In 2011, Oswalt was 9-10 with a 3.69 ERA. While those numbers are solid, they’re not game changing. As part of a whole rotation though, Oswalt might be just what the doctor ordered for Texas. Although, I sincerely hope not.