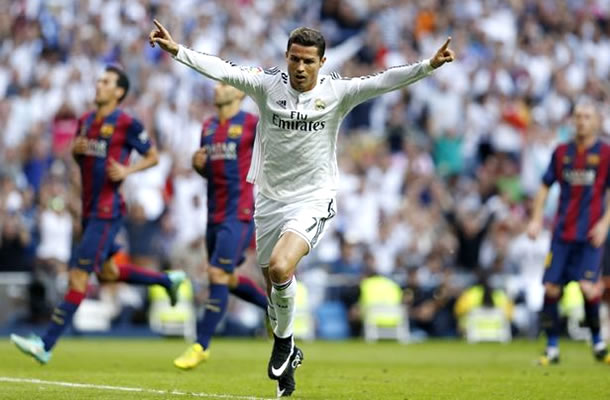 As I mentioned on Friday, I got together with my dad, my brother (you know him as El Bolso), and the added bonus of my niece and two nephews, to watch the first Clásico of 2014. Before the game, Barcelona sat at the top of the La Liga table with 22 points in the season’s first eight games, while Real Madrid sat in third place with 18 points. We expected a barn burner of a matchup in this one, but it ended up being a fairly one-sided 3-1 win for Real. Here’s how some of the things we were on the lookout for, and the rest of the game, ended up shaking out.

Maybe I didn’t make this clear in Friday’s post, but Uruguayan international Luis Súarez made his La Liga debut in this game. “Luisito (Little Luis),” as he is endearingly known (at least by those he hasn’t bitten or allegedly been racist towards), finally stepped onto a top flight football pitch after four months. Somewhat surprisingly, if only because it was his first non-friendly match in four months, he actually got the start in this one, and played 69 minutes. Overall, I thought he played very well considering the layoff.

In the fourth minute, he was left in space on the wing and sent a beautiful cross near the middle at the top of the box, where Neymar was waiting. Neymar took a couple of dribbles towards the middle and fired past Iker Casillas for a 1-0 Barça lead. In the 23rd minute, he was given some space again, and fired a perfect cross onto the boot of Lionel Messi right in front of the goal, but the Argentine international failed to convert the score that would have tied him with Telmo Zarra as the leading scorer in La Liga history. Tsk tsk, Lionel.

Luis didn’t do much the rest of the game, but that’s not saying much, as neither did anyone else on Barcelona. Said coach Luis Enrique of Suárez:

“I don’t regret letting Suarez start. He’s with the squad from the start, he did well, better than I expected. Defeats are part of football and of the learning process. We’ll see at the end of the season if we deserved something.”

While Suárez certainly wasn’t at his best, he wasn’t the reason Barcelona lost that game.

Going into the game, everyone on both sides was saying that this game was not at all about Messi and Cristiano Ronaldo, two of the best players in the world and the leaders of their respective clubs, clashing against one another for the first time this year. Guess what. That was still one of the big stories, and Ronaldo won.

For his part, Messi really couldn’t get anything going all day, missing a couple of scoring opportunities, including the one I mentioned before. Ronaldo, meanwhile, scored the equalizer. It came in the 35th minute, when Gerard Piqué decided to play goalie instead of defense, basically slipping and sliding his way into a two-handed handball in the box. Sure, it probably wasn’t completely on purpose, but you just can’t do that. Ronaldo stepped up, made sure hairs 37 and 145 were in place on his head, and nailed the ensuing PK, and the score was 1-1. That was pretty much it from Ronaldo for the rest of the game, but it was still better than what Messi was able to do.

Any football expert will tell you that, while the strikers often get the credit, many games are won and lost in the middle of the field. This game was no different, in my opinion. Barcelona’s midfield, which was made up of Sergio Busquets, Xavi Hernández and Andrés Iniesta, didn’t do anything all game long. Actually, that’s not true. In the 61st minute, Iniesta completely gave the game away. I should give credit where it’s due. It’s only fair. Anyway, Madrid was already up 2-1 at that point (Pepe had nailed home the eventual game winner on a corner from Toni Kroos in the 49th minute), and they hit a long clear following a Barcelona corner. Iniesta chased the ball with Real’s Isco stride for stride, but the Barcelona midfielder ended up basically giving it to his adversary and taking teammate Javier Mascherano out of the play completely all in one fell swoop. Isco played the ball to Ronaldo, who crossed it to James Rodríguez, who then dished it to Karim Benzema for the third, and basically match ending, strike.

Busquets can probably chalk up his poor performance to a bad game, but Iniesta and Xavi will most definitely hear the comments about their respective ages after this one. Iniesta turned 30 just before the World Cup, but he looked several years older in this one, and it wasn’t just because of his gray hairs. Xavi, meanwhile, is 34, which means he really should be heading to MLS soon. How about January? I know a couple of teams that could use him. Barça signed Ivan Rakitić before the season for a reason, and I have to believe they might have faired better had the Croatian international seen action before the 60th minute… but maybe that’s just me.

As for Real, the midfield didn’t necessarily light up the pitch, but they didn’t make any big mistakes, and they took advantage of the ones made by Barcelona. That’s all you really could have asked from them. They made it possible for the guys up front (and Pepe) to land the decisive blows. Kudos to them.

While this game was very one sided in the end, I don’t expect that this will be the case all year long. First of all, this game was played on Real Madrid’s home pitch, which is a pretty big advantage in football. These are two very good teams, and they’ll be battling for the La Liga crown all year long. We’ll see what happens when these two meet at Camp Nou on March 22nd.
Take a look at the highlights: