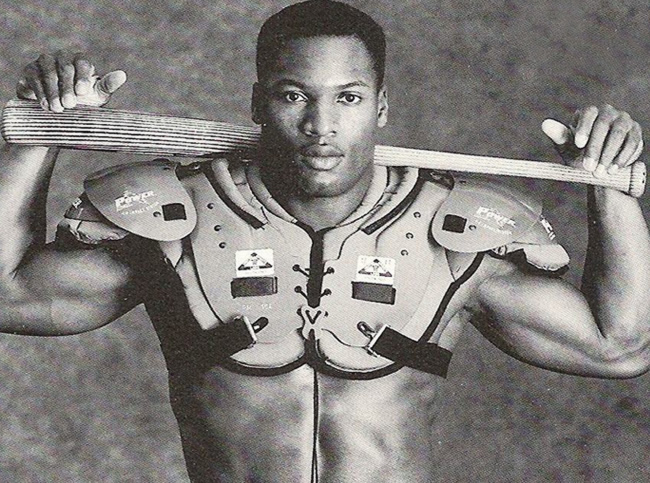 I’ve grown up around sports my entire life. Whether it was the NBA game of the week that made my family into Larry Bird and Boston Celtics fans even though we lived in South America to being the one to discover and fall in love with baseball when I was five years old and my family moved to the United States to now, when I just get to blabber on and on about it on the pages of Jobu’s Rum. I’ve always been a sports fanatic and, much to the chagrin of my girlfriend, I’ll always be one. The only regrets I have is that, although I’ve seen a lot of amazing athletes in my day, I didn’t get to see some of the all-time greats during their prime years. In some cases, I didn’t see the guys play at all. In others, I was just too young, so I either don’t remember them or couldn’t appreciate them at the time. Either way, I’ll pay tribute to them here and now.

The first thing I really remember about the Yankees is a two home run game by Dave Winfield. I remember we lived in the first house my family rented after we came to the US (for a time, we lived with an aunt and uncle in the area). I remember we didn’t have cable, so I was watching the game through the snowy, distorted picture on our big TV (you know, like how everyone my age grew up trying to sneak a peek at the Playboy Channel) and just listening to the announcers. To be honest, I’m not sure what game it was. My best guess, using the year we lived in that house and some box score research, was either opening day of 1988, or July of that same year.

Anyway, the point is that, if I started consciously watching the Yankees in 1988, I just missed one of the most dominant stretches of baseball in Yankees history. The Don Mattingly I really remember clearly was the offensive shell he became after hurting his back in 1990. While that Don Mattngly was a defensive machine (my dad always called him “The Vacuum Cleaner”) who could hit close to .300 and pop a home run over the short porch here and there, He wasn’t the same Don Mattingly that terrorized the American League from 1984-1987. There might not have been a better player in the league during that time.

During those four years, Mattingly hit .337/.381/.941 with 842 hits, 183 doubles, 119 home runs and 483 RBI. He won the batting title in 1984 when he hit .343, but he hit .352 in 1986. Both of those years, he led the league in hits (207 and 238 respectively). In 1985, he drove in 145 runs to lead the league. He won the American League MVP that year too. He also led the league in doubles three times during that stretch. In 1987, he hit 6 Grand Slams, a record that he shares today with Travis Hafner (oddly enough, they were the only six slams of Mattingly’s career). In July of that same year, he homered in eight straight games, tying a Dale Long record that was eventually also tied by Ken Griffey, Jr in 1993. Of course, Mattingly hit 10 homers during the streak, where as the other two guys only hit one per game… suckers. By the way, he also won three of his nine Gold Glove Awards during that stretch… incredible.

So yeah… I missed all that. Donny was always my hero growing up because he played great defense, got clutch hits and was a class act, but boy do I wish I could have been around for those four years, when he did all that and hit the crap out of the ball to boot.

I know, I know. I said this was going to be about athletes, not entertainers. Fortunately, for us, Ric Flair was both. And he was damn good at both. I grew up watching a lot of wrestling in the 1980s and 1990s, but I really only watched the WWF/WWE. I knew the Hulk Hogans, Randy Savages and Ultimate Warriors like the back of my hand, but I didn’t have a lot of exposure to the greats from other companies or territories. I’ve always known who Ric Flair was, even before his two year run in the WWF from 1991-1993. I’d always heard the name. I knew it was a big deal when he showed up on WWF TV with the NWA championship belt. The problem is I never saw him in his real hey day, when he was winning all of those NWA championships he was so well known for.

Now I know professional wrestling is fake. The wins and losses don’t count. However, the guys that get the belts put on them, are usually given those belts for being the best of the best as far as entertaining the crowds and working well in the ring. Even though someone else decides if you win or lose, you still only rise to the top if you’re among the best in the business. Lately, I’ve been going back and watching a lot of old Youtube videos from the NWA, AWA and other territories he worked in (before Vince McMahon killed the territory system by taking WWF national). It’s made me really appreciate how amazing Ric Flair was in and out of the ring.

He wasn’t just a kiss stealing, wheeling dealing, jet flying limousine riding son of a gun who could cut a great promo. He could also tell a great story in the ring, make his opponents look like a million bucks and, depending on if he was playing a heel or a face, make the crowd love or hate him with a passion they felt for no other entertainer of his time. Seriously. The guy was incredible in the ring and on the mic, and he lived the life he bragged about living. That’s why he’s broke today, and that’s why he’s probably the best of all time. That’s why he was often used to make new stars. Just by being in the ring with him, guys like Ricky “The Dragon” Steamboat and Sting were made into superstars.

I just wish I’d seen it all live as it was happening, and not just on Youtube.

This one’s a bit of a tricky one, because you could argue that no one ever really saw Bo in his prime. He was just 28 when he hurt his hip on the football field and derailed both of his athletic careers in 1991. Arguably, he had a couple of his “best” years ahead of him in both sports. I recently watched “You Don’t Know Bo,” one of the ESPN 30 for 30 films (from Volume II), and it made me realize a couple of things.

First of all, we might never see another Bo Jackson. We might not have ever seen another Bo Jackson before he came along either. He was that incredibly gifted. So gifted, in fact, that I have a feeling he could probably have succeeded in whatever sport he chose to focus on. This “Bo Knows” Nike commercials weren’t just fun and games. The movie does a great job of conveying just how anecdotal Bo’s accomplishments were. One of the sports writers hired to provide commentary for the film talks about how one person would see him do something and they’d tell a friend about it, and the friend would then tell someone else, and someone else, and someone else, until the Bo stories got to the point where you really weren’t sure if they were real, but you would believe them if you heard them. For example, if someone told you Bo Jackson jumped over two cars… you’d consider it for a second, wouldn’t you?

The second thing i realized is that I don’t remember him doing his amazing things. After watching that film, I’m realizing that he’s probably the best athlete of all time. Here’s a guy who won the Heisman Trophy in 1985, ran the fastest 40-yard anyone has ever run (4.12 hand timed), was the number one pick in the NFL draft and decided to play baseball. Basically, because he could, and he didn’t want to play for the Tampa Bay Buccanneers (he claims they lied to him about a private flight and cost him the end of his senior year baseball eligibility). Hist first major league home run is still the longest home run in Kansas City Royals history. He homered in his first All-Star game and, minutes later, those famous “Bo Knows” ads premiered on the broadcast. When he realized the Raiders wanted him a couple of years later, he decided to play football… as a hobby. Seriously. He called it a hobby. He would finish the baseball season, report to the Raiders and basically step onto the field without practicing, and he was the best player on the field at any given time. He even destroyed Brian Bosworth’s NFL credibility with one lowered shoulder!

Seriously, if you haven’t seen the ESPN film, please Netflix it, or just flat out buy it right now. You won’t be disappointed. It will make you wish you remembered his era better.