Warning: "continue" targeting switch is equivalent to "break". Did you mean to use "continue 2"? in /nfs/c11/h04/mnt/193474/domains/jobusrum.com/html/wp-content/plugins/wp-author-box-lite/includes/ReduxFramework/ReduxCore/inc/extensions/customizer/extension_customizer.php on line 478
 Peyton Manning Shouldn't Sit the Bench If He Doesn't Want to. | Jobu's Rum
Skip to content 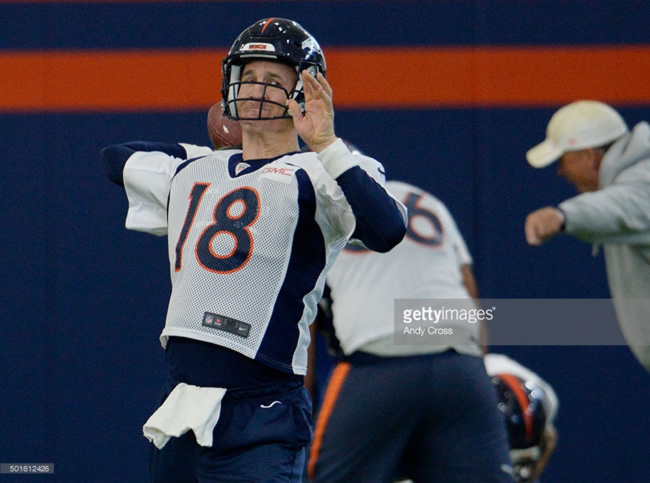 Peyton Manning is currently out battling a case of plantar fasciitis. He returned to practice this past week, but the Broncos decided to still go with interim starter Brock Osweiler against Pittsburgh this week. New reports now allege that Manning has expressed a refusal to back up Osweiler when he’s fully healthy. While some might say this is a selfish act by Manning, I disagree. He’s Peyton fucking Manning, arguably the greatest quarterback of all time, and he shouldn’t have to back up anybody ever.

First of all, let me make one thing clear. Manning has not been good enough to justify slotting him right back into the starting lineup this year. Before the injury, Manning was having, by far, his worst season as a pro. Through 9 games and starts, he had completed just 59.9% of his passes–not bad for a normal human QB, but Manning’s worst since his rookie season–and he was leading the league in interceptions with 17. That’s almost two per game, and the most by Manning since he had 17 in 2010. It’s safe to assume that he would have at least approached his career high of 28 interceptions, which he also set in his rookie year. In the game during which he suffered his injury, Manning had completed just 5 of 20 attempts for 35 yards and 4 interceptions. Just terrible.

While Manning’s been gone, Osweiler has flourished quite well for a guy who had never started a game before. The 6’7″ behemoth, who played his college ball at Arizona State and was a second round pick of by the Broncos in 2012, ended the Patriots’ undefeated season and has gone 3-1 in four starts. He has completed 63.5% of his passes for 1140 yards, 5 TDs and 3 INTs. While those aren’t world-beating numbers by any means, he’s not hurting the team like Peyton was in the games leading up to his injury. You could easily make the case that, like with  the Tom Brady and Drew Beldsoe situation in 2001, Osweiler has earned the chance to keep on keeping on and see his team through the rest of the season.

All of that being said, Peyton Manning is the NFL’s career leader in passing yards (71,871) and TDs (539), and would be the all-time leader in completions had he not gotten hurt. He also recently announced that he aims to play in the NFL next season, presumably whether it’s in Denver or not. If he doesn’t want to back anybody up, he shouldn’t have to. He should be able to throw his considerable metaphorical weight around wherever he wants. Brett Favre did it in Green Bay, and managed to shave a few years off of Aaron Rodgers‘ career in the process. Why can’t Manning do it for a couple of months before leaving as a free agent?

Here’s the kicker though. I don’t think the Broncos necessarily need to acquiesce to Manning’s request. They should probably be able to read the writing on the wall and know that he will not be in the picture next year. So far, they’ve done a great job of grooming Osweiler to take over for Manning at year’s end, it’s just that the takeover came a little bit earlier than everyone envisioned because Manning was terrible, and then got hurt. If they feel that Osweiler gives them the best chance to finish the season strong, make a deep playoff run and potentially win a Super Bowl, then they should stick with him.

Manning is a professional, and he should be able to handle the fact that he’s not currently what’s best for the team. He should be able to come to work prepared to play every week just in case, but understand that the job is currently Osweiler’s to lose. If he’s unhappy with the situation at the end of the season, he should move on and find somewhere else to play for next year. Peyton Manning is still the greatest QB of all time, but he needs to settle down, and move on after the season if he needs to.