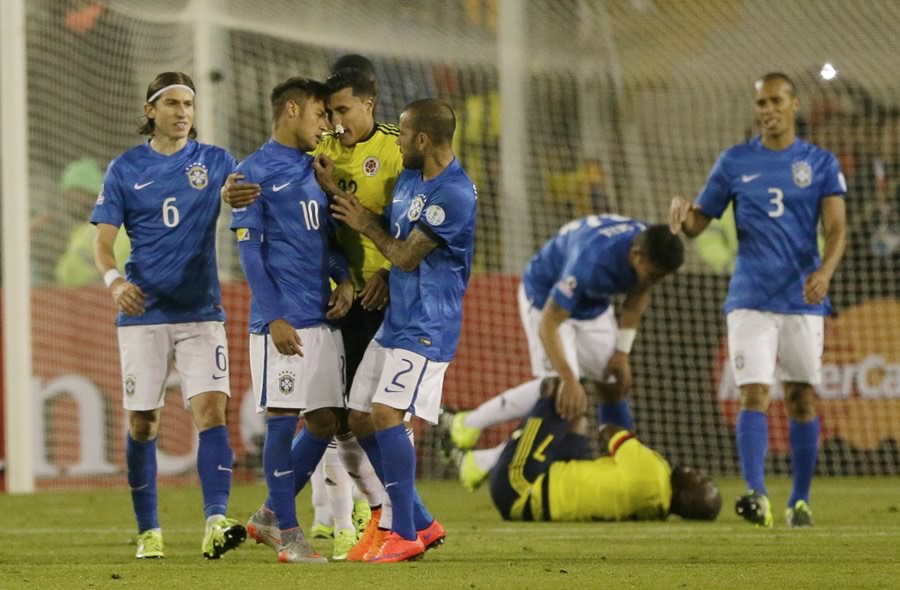 I dunno if you guys have been watching Brazil at this Copa América but, if you have, you’ve seen a team that is a shell of those of the country’s glory days. If not for Neymar, this team would be absolute hot garbage–something they proved last summer against Germany. Last night, Neymar was completely off his game, and the team lost 1-0. After the match, Neymar completely blew a gasket, and now he might be facing an extended suspension that would completely crush Brazil’s Copa América dreams.

Now, I didn’t watch this whole game, but I picked it up early in the second half, with the score already 1-0 after Colombia’s Jeison Murillo had netted home in the 36th minute. Right away, I was informed by our very own Jacqueline Purdy, that Twitter chatter was saying that Neymar had gotten a yellow earlier in the match, which meant he would be missing Brazil’s group stage finisher against Venezuela. That alone was pretty dashing to Brazil’s chances of moving on if they couldn’t equalize, but it was really just the beginning of the ridiculousness I was about to witness.

In the 57th minute, Murillo nearly went from hero to goat, when had a complete brain fart while attempting to pass the ball back to goalkeeper David Ospina. Murillo kicked the ball too softly, which gave Brazilian Elias a chance to run it down and have a one-on-one with Ospina. Instead of diving on the ball to smother it, Ospina completely had his own brain fart, misjudged how far away he and Elias were from the ball, and tried to slide kick it away. That failed miserably, and the ball ended up with a wide open Roberto Firmino. Firmino, who has been rumored to be heading to Manchester United this offseason, had a dream situation: goalie down, wide open net, just inside the box. Instead of hammering home the equalizer, Firmino loaded up and kicked the ball over the crossbar. After this, the third brain fart in the last few seconds, he then collapsed in a sad heap of misery. It was one of the worst displays of combined ineptitude I’ve seen all tournament. Worst of all, this all happened directly in front of Neymar. You could almost see Neymar’s hear sink as he realized he was surrounded by assholes. Watch it now:

Brazil never got a better chance than that and, as they realized they were going to lose, the Brazilians got a little chippy and tensions mounted from both sides. Personally, I think the animosity goes back to last summer, when Juan Zúñiga broke Neymar’s back with a knee from behind in their World Cup Quarterfinals matchup. That injury basically sealed Brazil’s fate against Ze Germans. Whatever it was, the pushing, shoving and chippiness lasted throughout the remainder of the match.

When the final whistle blew, a frustrated Neymar, who was setting up to take a free kick, blasted the ball into Colombian defender Víctor Ibarbo‘s back. Murillo saw this and walked over to “WTF” Neymar, putting his arms around the Brazilian in the process. Neymar proceeded to headbutt Murillo in the shoulder. That’s when Colombian Forward Carlos Bacca ran over and shoved Neymar hard in the back, and the shit nearly hit the fan. To everyone’s credit, most of the players were just trying to get everyone off the pitch, but the squabbling lasted for a few minutes. Suddenly, the ref pulled out a red card and started running toward the Brazil tunnel, where Neymar was attempting to get off the pitch. As Neymar turned and yelled some choice words at the charging ref, a team official quickly gathered the star Brazilian up and rushed him down the tunnel (because if you’re in the tunnel, you’re safe from red cards?). Unfortunately, the ref just held the red card up in Neymar’s general direction, and then jogged back and red carded Bacca as well.

The funny thing is that, from watching the post-game coverage (Chile Extra, as Bein Sport calls it), apparently Neymar should have gotten a second yellow–and therefore a red–on two other occasions in this match. After his initial yellow card for an accidental handball while trying to score, he put his hands on the ref while arguing. Later, a frustrated Neymar punched the ball away from play after a foul had been called against him. Both of those are yellow card offenses, but the ref let him get away with it, which I actually think is fine. You don’t want to cause a team a tournament because of something like that. However, the ref couldn’t ignore all the post-match shenanigans, and Neymar and Bacca got rightfully earned reds.

The point is, Neymar was clearly off his game all night. Teammate Dani Alves suggested that maybe one of the Colombians had gotten under Neymar’s skin a little bit in this game. Either way, it seemed like Neymar didn’t want to be out there, and was doing his damndest all game long to get thrown out. Just a complete meltdown. Unfortunately, for Brazil, their hopes at getting out of the group took a major dash with Neymar’s second yellow and their eventual loss to the Cafeteros. They now have to beat a pretty rugged Venezuela side without Neymar. Thus far, they have proven that, outside of Neymar, they have nothing, and have had nothing without him since at least last summer.

Will someone step up? They’re going to have to, otherwise Brazil will be going home after their next game. Even if they manage to get through Peru, if Neymar’s suspension lasts any longer than one game (we’ll find out today if it does), Brazil’s not getting out of the round of 16 anyway. How the mighty have fallen.