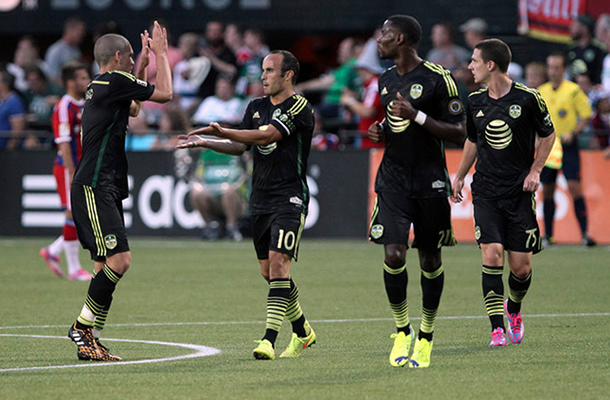 For those of you who haven’t been keeping up, last night was the 19th annual MLS All-Star game. MLS does their All-Star game a little bit differently, so here’s a little background on that:

From 1996 to 1997, the league did a traditional East vs. West game, with All-Stars from each conference facing off against each other. In 1998, they decided that the game should be played between an MLS USA squad made up of all American players, and an MLS World squad made up of foreign players playing in MLS (like the NHL used to do). That didn’t work out, apparently, because the league switched back to the traditional East vs. West style from 1999-2001. In 2002 and 2003, MLS tried something completely different, inviting first the USMNT, and then Chivas Guadelajara to come and play against their All-Stars. In 2004, they once again went with an East vs. West game, but then I guess they realized how much fun it had been to invite guests over to the USA, because since 2005, they have invited some of the best teams from around the world to have a go on US soil.

This year, the league decided to invite the famed Bayern Munich (aka FC Bayern München) to play against the class of MLS in Portland, at the home of the Timbers. Bayern is still wrapping up their pre-season, but still sent most of their big names stateside to participate in the game, and American fans got to see not only the current reigning Bundesliga champions, but also many members of the current World Cup champion German squad, like Thomas Müller (a Jobu favorite, pictured below), Mario Götze, Bastian Schweinsteiger, Jérôme Boateng, Philipp Lahm and Manuel Neuer. They also got to see other great World Cup players that make their club money at Bayern, like Xherdan Shaqiri, Arjen Robben and the USMNT’s own, Julian Green. Most of those guys came in as late subs, but it’s cool that they were even in the building, let alone in the game.

Anyway, Bayern got the scoring started very early, when Polish born Robert Lewandowski, whom many feel might be the best striker in the world, eluded a defender and then blasted an 18-yarder past Real Salt Lake net minder Nick Rimado. The goal was gross, and it gave Bayern the early 1-0 lead. Despite a fairly open game with many chances for both teams, nobody scored for the rest of the half, and so we went to the break with Bayern still up 1-0.

Portland coach Caleb Porter subbed ten players at the half (there are no substitution limits in friendlies), but it was the move he didn’t make that ended creating one of the most special moments of this game. The only starter that was left in to start the second half was French legend Thierry Henry. It has been speculated that this might be Henry’s final MLS All-Star game appearance, as the New York Redbulls Midfielder is rumored to be retiring. Just three minutes into the half, Porter pulled Henry, giving the fans a chance to celebrate one of the greatest players to ever grace an MLS field. The fact that Henry was replaced by none other than Landon Donovan, made the crowd even more joyous. The two men embraced one another on the way by, sharing a special moment–one legend replacing another.

The crowd had even more to cheer for just three minutes later, when current MLS goals leader Bradley Wright-Phillips blistered one past German keeper Tom Starke from just outside the box to tie the game. In the 70th minute, the crowd was treated to one last thrill–one they’ve been watching for the better part of the last fifteen years or so. A beautiful ball by Argentine Diego Valeri left Donovan ahead of the defense and inside the box. The 14-time MLS All-Star wrestled the ball away from two defenders and struck it just under the arm of Neuere–the World Cup legend had subbed in just eight minutes prior–to give the MLS All-Stars a 2-1 lead they would not relinquish. Since I started writing this post, Donovan announced that he will retire from all fútbol competition at the end of the season, which makes that goal all the more special.

One other interesting note from this game, was the abhorrent behavior of Bayern Munich coach Pep Guardiola. Guardiola took offense to a bit of rough play from the MLS All-Stars (a couple of Bayern players were taken down roughly in the second half, and some yellows were handed out), and twice yelled toward Coach Porter and the MLS All-Star bench. After the game, when Porter went in to shake hands, Guardiola refused to shake hands, instead shaking his finger and walking angrily off the field. Guardiola added that he hoped Bayern would be invited back next year, and that he and his team would be ready. No game should ever be truly meaningless, and Guardiola should have known better than to take offense and cry like a baby bitch. Settle down, Pep!

Anyway, tantrums aside, just because this was an exhibition, doesn’t make it a big time win for MLS. This league is really starting to establish itself as a major market for international superstars–albeit those who are exiting their primes–and now if they can start beating big name teams–even though it was in an exhibition game–people will have to take notice. It was a huge win, and we should all be proud. Check out some highlights below.

Lewandowski Gets the Scoring Started

Wright-Phillips Ties it Up:

Donovan for the Win: