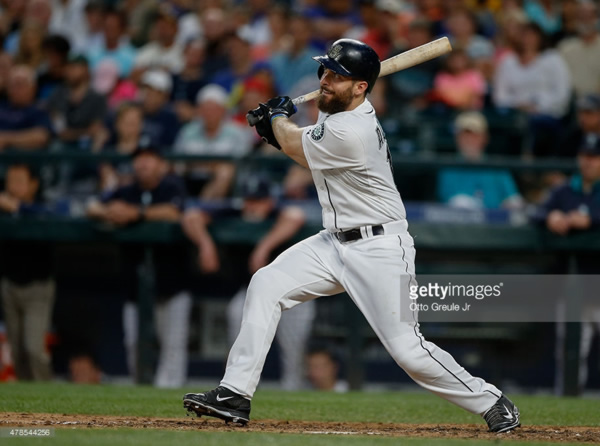 This topic was also covered in the last installment of The Jobu’s Rum show, which you can listen to here, but this post is a bit of a deeper look at the Yankees new 2B/OF.

If you had told me the only acquisition the Yankees would make at this past Friday’s MLB trade deadline would be Dustin Ackley of the Seattle Mariners, I would have laughed. I wouldn’t have been surprised, because that’s been the M.O. the last couple of years as Brian Cashman and the brass attempt to rebuild the minor league system and save money by building from within, but I would have laughed. The Yankees had several needs on the big league level, namely in the bullpen, the starting rotation, second base and the bench. Hey. At least they adressed one need… Let’s meet Dustin Ackley!

Dustin Michael Ackley was born on February 26, 1988 in Winston-Salem North Carolina. His father, John Ackley, played seven years of minor league baseball for the Red Sox organization, making it as far as AAA for a 13-year stretch in 1985, before leaving the game at age 23. Overall, the elder Ackley hit .243/.346/.411 in 406 career minor league games, which is kind of right in line with Dustin’s career MLB numbers, but we’ll talk about that later.

Ackley had a solid high school career in North Carolina, helping his school win titles in 2003 and 2004, and winning conference player of the year as a junior. After high school, Ackley moved onto the University of North Carolina, where he had a pretty storied career. He set the school record for hits (119) his freshman year, becoming only the fifth Tarheel to hit .400 over a full season and winning national freshman of the year. The next year, he hit .417 and set the school record for runs scored (82). His production dipped as a junior, as he only hit .399 (boo), but he did clock 20 homers, and was named the ACC Player of the Year. Did I mention he also has the record for most hits in the College World Series?

In any other year, Ackley might have been the number one overall pick, but the 2009 draft also featured a pitcher by the name of Stephen Strasburg, so Ackley went second to the Mariners. He signed a major league contract off the bat 15 minutes before the draft pick signing deadline, and reported to the Arizona Fall League, and eventually to the Mariners’ minor league system. Ackley made his major league debut in June of 2011, and has pretty much–other than a 25 game stertch in 2013–remained at the big league level ever since.

He performed admirably as a 23-year old rookie in 2011, getting into 90 games and hitting .273/.348/.417 with 6 homers and 36 RBI in 90 games. The next year, he was handed the starting second base job, but the results were not as good. In 153 games, Ackley hit just .226/.294/.328 with 12 homers and 50 RBI, epitomizing what is known as the “sophomore jinx” in the baseball business. Unfortunately, ackley hasn’t really ever recovered from that. The next year, he spent those 25 games in AAA, and hit only .253/.319/.341 with 4 homers in 113 big league games. He was moved to the outfield in 2014 when the Mariners signed Robinson Cano, and had his best year as a pro. Unfortunatley, that came with only a .245/.293/.398 slash line. He did hit 14 homers with 65 RBI, which was nice, but it became pretty clear that Ackley was probably never going to fullfill that potential he showed when the Mariners made him the second overall pick.

Before the trade this season, Ackley was having probably his worst year as a pro, slashing .215/.270/.366 with just 6 homers and 19 RBI in 85 games with the Mariners. When Cashman called to see if he could pry Ackley away, the Mariners were more willing to part with their former stud prospect than in previous seasons. It took parting with Ramon Flores and Jose Ramirez to get the deal made. Flores, a 23-year old outfielder who had made his major league debut earlier this season, was not a huge loss for the Yankees, who have two much better outfield prospects in Mason Williams and Slade Heatchott currently on the disabled list. The same goes for Ramirez, who has failed to impress during his cups of coffee in the Bronx over the last two years. Neither player has star written all over them or anything, but Ramirez throws gas. If he can ever harness his location, he could be a force, but at 25, it’s getting less and less likely that he’ll be able to do that.

On paper, there’s nothing wrong with this trade. Two prospects does seem like a high price to pay for a guy who has failed to establish himself as a successful major leaguer in now his fifth season in the bigs, but neither prospect was a top-of-the-line type of guy, and I don’t think either will amount to much more than what Ackley has become so far. I guess that remains to be seen. It’s definitely disappointing that Ackley’s acquisition was the only one Cashman made at the deadline, but the team is sitting six games up in the American League East, so I’m glad they didn’t give up top prospects Aaron Judge, Luis Severino, Greg Bird, Gary Sanchez or Jorge Mateo for a two-month rental at this point. Also, Ackley is affordable, and under team control until 2018. If they are really dissatisfied with him, the Yankees can always add an arm, or a bench guy, during the waiver trade deadline this month.

It remains to be seen what Ackley will accomplish in his limited role with the Yankees. For now, he’s 0-2 with a couple of groundouts, and the only thing he has accomplished is getting Garrett Jones designated for assignment, which I guess is fine. Stephen Drew, the man in front of Ackley at 2B, has been heating up of late and has gotten his average all the way up to .199 (my brother and I both think they should stop the game and give him the ball if he can get above the Mendoza line), and the outfield is pretty set, so playing time might be hard to find for Ackley anyway. I hope they find him some innings, because I heard it took him 20 minutes to shave his beard, and he even needed help to do it.