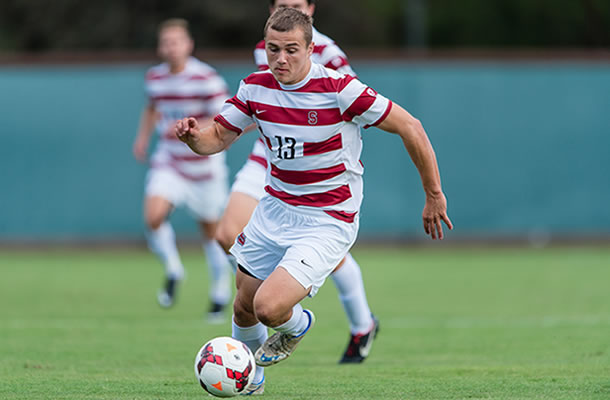 In case you missed it, coach Jürgen Klinsmann named his USMNT roster ahead of the friendly against the Czech Republic on next month. There are some surprise inclusions to the team, like Real Salt Lake’s goalkeeper Nick Rimando as the only MLS player named, and a handful of players who have never suited up for USMNT before–Southampton goalie Cody Cropper, Fulham midfielder Emerson Hyndman, F.C. Utrecht forward Rubio Rubin, Club Tijuana defender Greg Garza and Borussia Dortmund II attacker Joe Gyau. The biggest surprise of all, however, is a young man who is currently not even a professional. Meet Stanford University’s own Jordan Morris, the first collegiate member of the USMNT in 15 years.

Before we all get completely crazy, the 5’11” sophomore forward from Mercer Island, WA is a product of the Seattle Sounders youth academy, so it’s not like he’s completely out of nowhere. That being said, he’s the first non-professional to get a USMNT roster call up since Chris Albright in 1999. If Morris actually gets into the game against Czech Republic, he will be the first collegiate player to play in a USMNT team game since Ante Razov in 1995–over 20 years ago.

Now, I understand that this roster is for friendly, and that many of the young players (15 under the age of 24) will give up their spots to guys like Clint Dempsey, Michael Bradley, Deandre Yedlin and Omar Gonzalez, but I do like the idea of Klinsmann letting some of the youngsters get some international play as the team begins the preparation for upcoming tournaments, like the CONCACAF Gold Cup next year and the 2016 centennial Copa America. Said Klinsmann of his roster moves:

“We look at this as the start of our project towards Russia in 2018, and in this first step we get to look at many of our talented young players based in Europe. We have some great youngsters coming through the ranks that are starting to break through with their club teams and are ready to challenge for spots on the Senior Team, and even most of our World Cup veterans from Brazil on this roster will be coming into the prime of their careers in the next four years, so this is an exciting opportunity.”

These moves make great sense for a friendly. Not only do you not guys like Clint Dempsey and Michael Bradley getting hurt in a friendly and risking their MLS club seasons, but I’m pretty sure neither of those guys will have big roles in 2018. The USMNT has to see what the next generation of talent has to offer. Who knows? Maybe Klinsmann will discover 2018’s Landon Donovan (and leave him off of the 2026 team… hyoo). Maybe it will even be Jordan Morris.