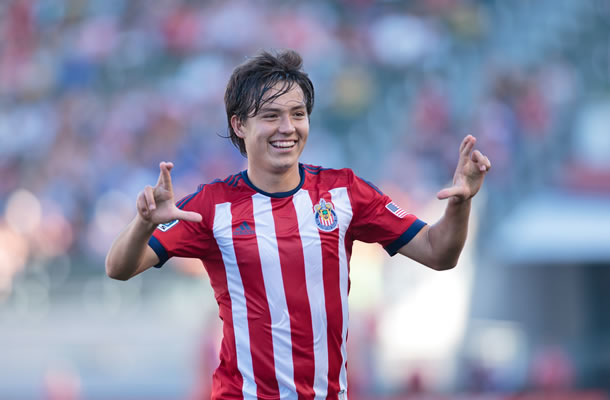 If you follow Major League Soccer closely enough, then you already know who Erick “Cubo” Torres is. The 21 year old Guadalajara born striker currently leads Chivas USA in scoring, and recently got his first international cap for his native Mexico in a friendly against Bolivia (a solid performance in a 1-0 win for the youngster). All that taken into consideration, I think this is a perfect opportunity to get to know him a little better.

Torres was born in Guadalajara, Jalisco, Mexico, which is where he started playing youth fútbol with C. D. Guadalajara, more coloquially known as Chivas Guadalajara (the goats of Guadalajara). He made his Liga Mx debut with the main Guadalajara club in 2010 at the age of 17, and netted 14 times in 64 games over the next four years. In July of 2013, he was loaned out to Chivas USA, where he became an instant starter for the MLS club. Until just this year, Chivas USA was basically a subsidiary of Guadalajara (owned by the same man, Jorge Vergara), so the loan makes perfect sense. Guadalajara wanted Torres to get some playing time, and they had the ability to loan him out somewhere they could keep a close eye on him, so they did, and Chivas USA signed him on loan as a designated player.

Anyway, despite the fact that Chivas USA is awful, Torres has been making quite the name for himself since debuting in MLS last season. In 15 games with Chivas USA in 2013, Torres scored seven goals and assisted in another, earning two Latino de la Jornada (MLS Latino Player of the Week) honors along the way. He was even nominated for Goal of the Year for a strike against Vancouver in September.

Torres making his debut for the Mexican national team on September 9th.

This year, Torres has been the only positive for an absolutely abysmal Chivas USA squad. In 25 games, he has scored 14 times and assisted on one other. With his goal on June 28 against Real Salt Lake, the 17th of his career, he broke the record for most MLS goals by a Mexican born player. Pretty cool. I know 14 goals is good on it’s own, but please let me put his scoring prowess in perspective for you. As a team, Chivas USA has scored 22 goals in their 27 games, and Torres has 14 of them. That’s a 64% clip. At one point, this team went six league games without a goal. and they have a guy with 14 goals on the team. He’s obviously crucial to any type of success Chivas USA could hope for. How bad would they be if they didn’t have him? I shudder to think.

Anyway, I’m curious to see what happens to Torres now that MLS owns Chivas USA, and will sell and rebrand it at the end of the season. I’m ot sure what Guadalajara’s roster situation is right now, but I would imagine that, considering his performance so far in 2014 and the fact that he’s now becoming a player on the international scene, Guadalajara might want him back once his loan period ends. It would be a shame for both Chivas USA (or whatever they will be called next year) and Major League Soccer to lose Torres, because, despite not being on a team that gets a lot of sunlight, he’s one of the brightest young stars in the league.

Here’s hoping we still get to see the man they call “Cubo” in the years to come.