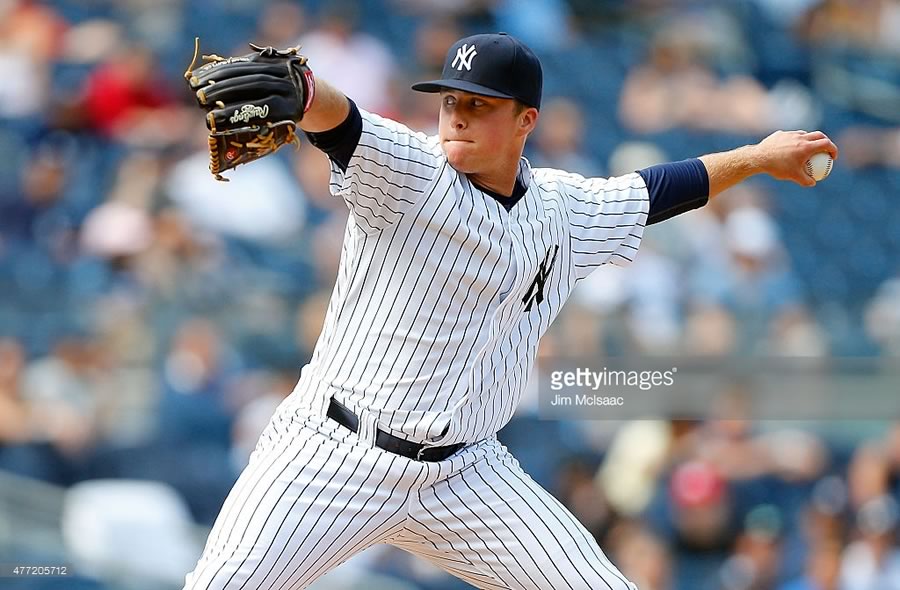 The Yankees are currently 19-11, and three games ahead of the Rays for first place in the American League East, so there isn’t much to complain about. However, teams should never become complacent. They should always be looking for ways to improve, and I have one: Jacob Lindgren. The kid is lighting it up at Triple-A Scranton right now, and it might be time for him to get a look in the Bronx. Who needs to go to make room? Let’s look at some candidates.

First of all, some information about Lindgren. Our very own Caitlin Rogers wrote up a great profile of Lindgren this offseason, and I highly suggest you check it out, but I’ll sum up the scouting report on Lindgren here. The Yankees took the 22-year old out of Mississippi State in the second round of the 2014 draft. The lefty has worked his way quickly through the system with a fastball that sits in the low 90s and, according to Jim Callis of MLB.com, “a true wipeout” low 80s slider. Everybody got that? Good.

Lindgren spent last year working his way from rookie ball to AA, and was sent to AAA to start this season. So far, so good for the young southpaw. “Lindy”, as I’m sure he’ll be anointed by Joe Girardi as soon as he arrives, has pitched in 10 games so far for the RailRiders, and hasn’t disappointed, hurling 12.1 innings, with a 2.19 ERA (2.43 FIP), 16 strikeouts and a couple of saves on the young season. The one somewhat alarming number is the seven walks he’s racked up in those 12.1 frames. Walks have been the one negative so far in Lindgren’s short career, as he has walked 4.9 per nine innings during his Yankees tenure, but I think the strikeout is the great equalizer. Lindgren also does a good job of keeping the ball in the park, and hasn’t yet allowed a homer in his professional career, which helps limit the damage from the free passes as well.

Anyway, if the Yankees are going to give Lindgren a chance, someone’s got to go. I think the current structure of the bullpen leaves only a few guys that could potentially get sent down. Working from the late innings backward, Andrew Miller and Dellin Betances are clearly not going anywhere. They still haven’t even allowed an earned run, for Pete’s sake. Esmil Rogers has performed wonderfully as the long man so far, and the Yankees need his versatility. That leaves four guys that could potentially move over for Jacob: Justin Wilson, Chris Martin, Chasen Shreve and David Carpenter.

Wilson most resembles the type of pitcher that Lindgren is. He packs a little more punch into his fastball than does Lindgren, but both are lefties with questionable control who seem to bend but never break. Wilson has put 6 guys on base via walk in just 10.2 innings, but has struck out 10. The strikeouts have allowed his ERA to stay relatively low at 4.22 (was 2.79 before last night), and we saw him get some pretty big outs against Pablo Sandoval and the Sox a week ago too. I think he’s shown flashes of being a “big out” type of pitcher, and you can’t teach that. I think he’s shown enough so far on the young season that he should stay.

Next, let’s take a look at Chris Martin. As a guy the Yankees basically got for free because he’d been cut by the Rockies, you might think the shelf life on Martin isn’t going to be too lengthy. So far, however, he has stayed fresh and really performed admirably. He’s become 2015’s Tanyon Sturtze, as Girardi has seemingly pitched him in as many games as possible. In 15 games and 12 innings, Martin has a 3.55 ERA (his FIP is under 2.00, though), with 13 Ks and only three walks. He did recently help cough up what would have been a 1-0 win at Toronto, but that’s the life of a big league reliever. Sometimes you’re gonna give up runs. Also, he’s 6’8,” throws the ball at the speed of sound (one), and I’m not done making Coldplay puns yet, so Martin stays in paradise (ah-two), and won’t be swallowed by the sea (ah-three).

Let’s talk about Chasen Shreve, shall we? The 24-year old lefty has already been sent down to Scranton once this year, and many have pegged him as the guy to “ride the shuttle” all year long, so you’d think he’d be an obvious candidate to get sent down for Lindy. However, if a guy is pitching well, should he be sent down just because he’s the guy that can get sent down? No. Shreve has proven to be a pretty solid and versatile weapon for the Yankees so far this season. Through 10.1 innings, he’s allowed only three runs and struck out ten. His most impressive performance was in that absurd 19-inning game against the Red Sox, when he pitched 3.1 shutout innings and struck out four. Shreve has been a little inconsistent at times, and has allowed runs (or inherited runs) in his last three outings, but I think this guy is a big league pitcher. He stays.

You can see the success of everyone else in the video above… This leaves only one guy on the list, and that’s David Carpenter. The Yankees got Carpenter this offseason and plugged him into the Shawn Kelley role, and the righty has responded by starting his Yankees career just like Kelley did. He simply cannot seem to get anyone out. Through his first 10.1 innings, Carpenter has allowed eight hits, four walks, two homers and has an ERA of 5.23 (5.87 FIP). The last time he pitched, he almost blew a six run lead, and the Yankees had to call on Miller in a game that should have been a day off for their de facto closer.

Performance wise, Carpenter’s the one not getting the job done right now, to the point where he’s barely pitching, and should be replaced. However, he is out of minor league options, and cannot be sent down without risk of losing him to another team. Also, if we consider the Kelley factor, things might not be so bleak for Carpenter. In April of 2013, Kelley had a 7.84 ERA. Something clicked in the righty starting in May, and he pitched to a 2.50 ERA over the next four months, before a rough September raised his ERA again. Kelley ended up being a pretty valuable arm in the pen in 2014 too. The point is, it might be too early to give up on Carpenter.

See? He’s been no good. Anyway, this post is getting way too long, so I’ll wrap it up now. Assuming Lindgren continues to perform, I think the Yankees can afford to wait another month or more before making a move with him. A lot can change in a month. However, I’m all about performance rewards, so right now, I’d DFA Carpenter and go with the kid.

What do you think, Pinstripers? Vote in the poll and comment below! Also, when do you think we might see a Triple Lindy™–what I’ll be calling when Lindgren strikes out the side–in the Bronx?