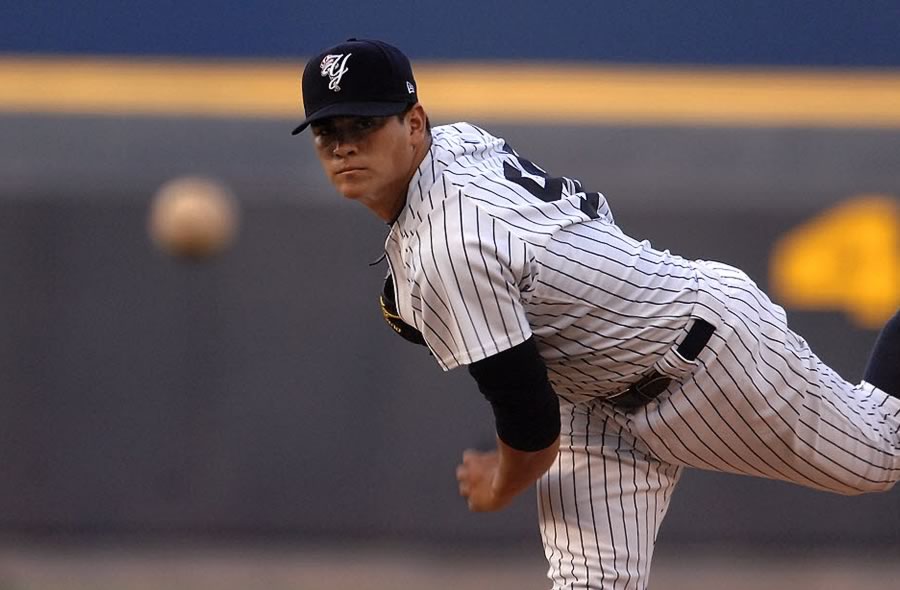 Manny Banuelos was once one of the most highly touted prospects in the all of baseball, and certainly the most highly touted pitcher in the Yankees system. He seemingly had all the tools to be a front of the rotation starter, and it was only a matter of time before he’d be King of the Bronx. Three years later, he still hasn’t made his Major League debut. What the hell happened, and is Manny running out of time? Let’s investigate.

All offseason long, I’ve been referring to Manny as Banny Manuelos. Why? Well, mostly because I’m an idiot, and I’m easily amused. However, as simple and stupid as it is, the nickname stems from something legitimate. Three years ago, Manny Banuelos was on a gravy train with biscuit wheels, nearly breaking camp with the Yankees despite barely having pitched in AAA. He was throwing in the mid 90s from the left side, mowing down Spring Training batters and making us all feel good about the future. Then Banny Manuelos, Manny’s evil and terrible alter ego, came on the scene.

Banny Manuelos suffered a shoulder strain in May, 2012. Banny suffered a bone bruise in his elbow in September 2012. Banny had Tommy John surgery that October, which cost him most of the next two seasons. Banny finally got back on the mound last year, but still wasn’t quite right, as he struggled to shake off the rust of two lost seasons. He managed to work his way all the way from A+ ball to AAA last summer (talk about starting over from scratch), but his numbers weren’t all that great. Overall, he made 25 starts out of 26 games pitched, but managed just 76.2 innings pitched as the team was closely monitoring his workload to avoid any setbacks on his surgically repaired elbow. Manny ended up with a 4.11 ERA, a 1.239 WHIP and 71 Ks in those 76.2 innings, which is fairly respectable when you consider everything he went through. He walked 31 men, which is a little high, but that’s to be expected after such a long time away. Banny hasn’t let Manny shine too often over the last two-plus years, and everyone’s getting pretty tired of Banny.

Basically, all of our photos of Manny Banuelos are slowly disappearing right now. The longer he lets Banny run around sullying his good name, the less likely it will be that we ever see Manny again. Can he go back in time? Can he knock out Biff Tannen, make his dad fall in love with his mom, play Johnny B. Goode in front of the whole prom stop those photos from fading out, or will he just end up missing all the cords because his hands are dissolving? Well, I think he can fight his way out of Banny’s clutches. First of all, he’s only 23. We’ve been talking about him as an on-the-verge guy for so long, that you’d probably guess that he’s 27 or 28 by now and reaching the official “shit or get off the pot” time in his career, but the truth is he can still right the wrongs perpetrated by Banny and turn his career around. Apparently, his velocity is all the way back, and he’s even developed a cutter too (who doesn’t, these days? I’m pretty sure I’ve been working on a cutter too). This has the Yankees brass excited about him for this coming season.

Call me an optimist, but I think this is finally the year we see Manny up in the Bronx. There was talk about calling him up last year to help in the bullpen, so I don’t think the Yankees would hesitate to call him up – assuming he gets off to a good start – if the team needs help. Because of his age, I don’t think this is necessarily a make or break season for Manny. If anything, the last two years of Banny have taken away any pressure Manny might have felt, and probably helped him grow up a little too. As Kelly Clarkson, the song bird of our generation, once said, “What doesn’t kill you makes you stronger.” Manny should be picking cars up over his head by now.

Anyway, here’s hoping Manny arrives sooner rather than later, because my life would suck without him (see what I did there? Ah?). Merry Christmas, everybody!