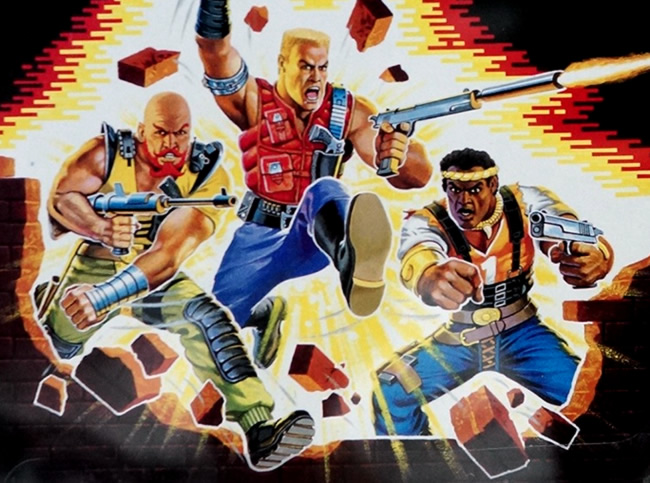 They say behind every man is a great woman. Unfortunately, for Sergeant Slaughter, one of G.I. Joe’s most famous and decorated leaders, all he had behind him was a band of yahoos called The Renegades. Let’s find out more about these lesser known G.I. Joes, and whether or not Sergeant Slaughter would have been better off teaming with Jinx, Scarlett, Lady Jaye or even his nameless, sleepy sister. 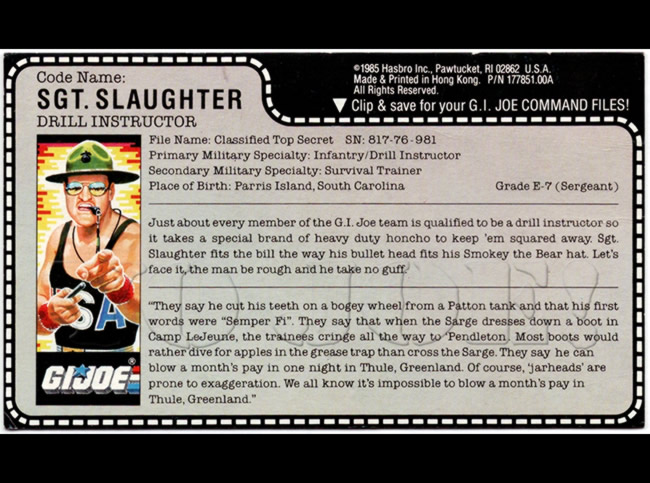 First of all, a quick history of the man at the head of this team of miscreants, the great Sergeant Slaughter. If you don’t know who this guy is, you should be ashamed. Slaughter is the guy the Joes would bring in when their troops were getting too lazy and unmotivated and needed to get whipped forcefully into shape. Now, you’d think an elite special missions force would be pretty self-sustaining in the motivation department, but even the best trained military units apparently turn into little bitches during the down time following big missions. Anyway, Slaughter’s job was to come in, yell at them, make them run through tires and what not, until they were motivated to go kill Cobra again. He’s also famous for turning on the United States and becoming an Iraqi sympathizer on his way to a WWF World Championship run during the Gulf War, but that’s neither here nor there. Hogan kicked his fucking ass back to respectability anyway.

OK, now that we’ve established his credentials, let’s get to his band of offbeat officers, The Renegades. 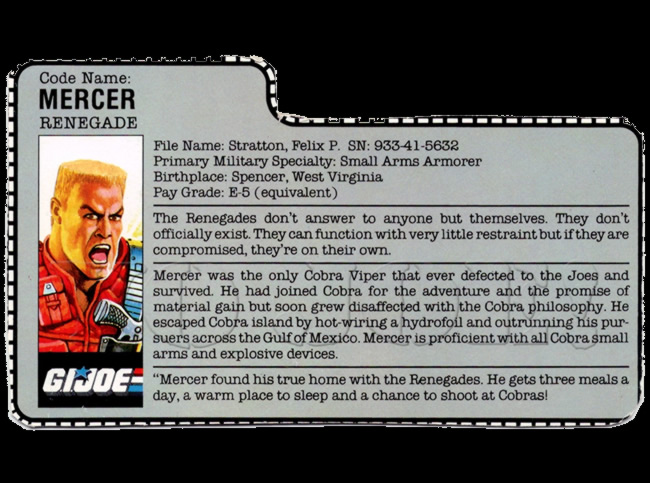 The coolest part about Mercer (real name Felix P. Stratton) is that he was once a member of Cobra. That’s right, he was sleeping with the enemy like Julia Roberts. He even graduated from the vaunted Viper School. I hear that’s the Harvard of the criminal world. As you can see from his file card, he is the only member of Cobra that “ever defected to the Joes and survived.” I guess this means G.I. Joe was killing anyone who tried to defect? Is that really a good intelligence strategy? “This guy says he’s from Cobra and wants to give us all of the codes to their door locks and plans for their heists and what not… We better kill this guy now! Before it’s too late?”

Anyway, Mercer joined Cobra because of the promises of adventure and material gain, but apparently he didn’t get enough, because he quit. Good on the Joes to not murder him, but rather to accept him into the flock. In fact, they eventually used his services to break into the Terror Drome in G.I. Joe The Movie. They didn’t, however, bother to give him new clothes. His vest still has the Cobra insignia on it, which led to Flint nearly killing him at one point. Maybe that’s why the other defectors didn’t survive? Maybe they kept getting mistaken for Cobra agents and being murdered and shit. Give the man a G.I. Joe t-shirt or something. There’s gotta be some lying around somewhere. If not, they definitely sell it on the internet. Jesus! How many times do you think he got tackled in the mess hall because of that vest?

Why was he named Mercer? I’m assuming it’s based off of mercenary, but that has one less “r” in it, so I really couldn’t tell you. Did anyone else notice that he’s blonde in the file card, but not in the movie? Anybody got an answer for that? 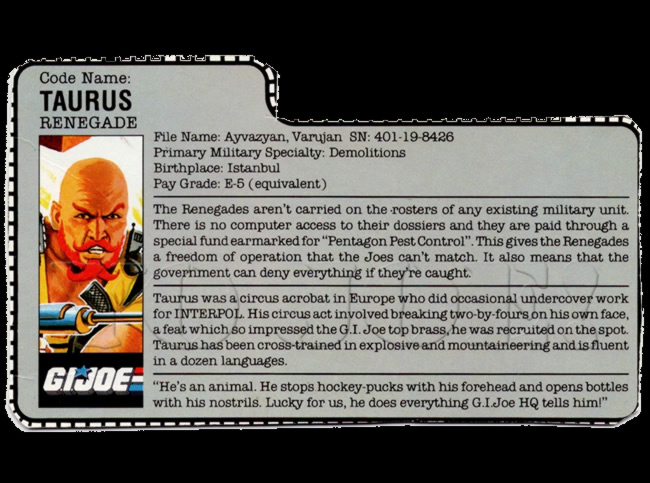 I know society trains us to fear and mistrust gingers, but I do not subscribe to that policy at all. Bald-headed gingers with big bushy beards, however… That I’m not going to sit here and tolerate. I mean look at this fool, Taurus (real name Varujan Ayvazyan). The only other bald ginger beardo I can think of is the WWE’s Erick Rowan, and he’s a brainless psychopath who follows around a cult leader whose persona is mostly based on Robert Deniro’s role in Cape Fear (sorry Bray Wyatt, we still love you).

Did you read this guy’s file card? Although he’s a trained acrobat, it seems his main talent is breaking two-by-fours over his own face! Who recruited this guy, 1980s Vince McMahon? Can we talk about how he opens bottles with his nostrils? I assume that’s beer bottles, and I’m pretty sure that’s total bullshit. He would get more nosebleeds than an elementary-school nerd if that were the case. Does he have metal nostril implants? Come on, bro. The Fresh Prince can’t do four million sit-ups in a minute (he ain’t lyin’! He did it!), and you can’t open bottles with your nose holes. Also, what missions are the G.I. Joe brass sending this guy on that he needs to stop hockey pucks with his face? This smells like a drunken college prank to me… “No, seriously man! You have to take this hockey puck off your face! Your country needs it! No I’m not drunk! How dare you addressss your sssperior ociffer in that manner? (hicup!)”

Taurus’ name probably comes from the fact that he resembles someone who lives in a swamp and probably drives an old Ford Taurus. I can’t really think of any other reason. I don’t see any horns… 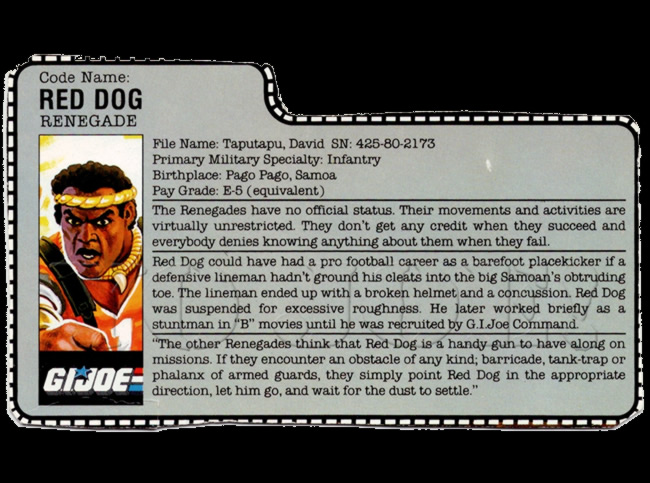 Red Dog (real name David Taputapu) has one of the more heartbreaking stories you’ll ever hear out of G.I. Joe. As you can read on his file card, he was once thought to be destined to be an NFL kicker. Not just any old kicker, but a barefoot kicker! For some reason, that was really big in the 80s, and several NFL Kickers (Mike Lansford, Paul McFadden and Rich Karliss) decided to cast off their shoes, so I guess G.I. Joe was trying to capitalize on that craze with this anecdote about Red Dog. Tragically, a big fat lineman cleated Dog’s big toe and ended the kicker’s promising career. Don’t worry, says the file card, Dog kicked the shit out of him right there on the field. I think that’s one of the subjects of those G.I. Joe “Knowing is Half the Battle” vignettes from the old cartoon. “If someone steps on your toe, kick the ever living shit out of them and give them a concussion.”

Anyway, that kind of gumption was just what G.I. Joe was looking for, and Red Dog’s crushed toe did nothing to impede his military readiness, so he soon signed as a free agent with the Joes. Also, can we just talk about the fact that Tom Dempsey, a former kicker for the Saints, Eagles, Rams, Oilers and Bills, was born with half of one foot missing, and he spent 11 years in the NFL and once kicked a 63-yarder? Maybe Red Dog could have kept going, that’s all I’m saying.

I don’t know where Red Dog’s name comes from either… maybe he really likes terrible beer? I do know, however, that he is the only G.I. Joe ever to hail from the island of Samoa, which is pretty cool because it probably means he’s related to The Rock. 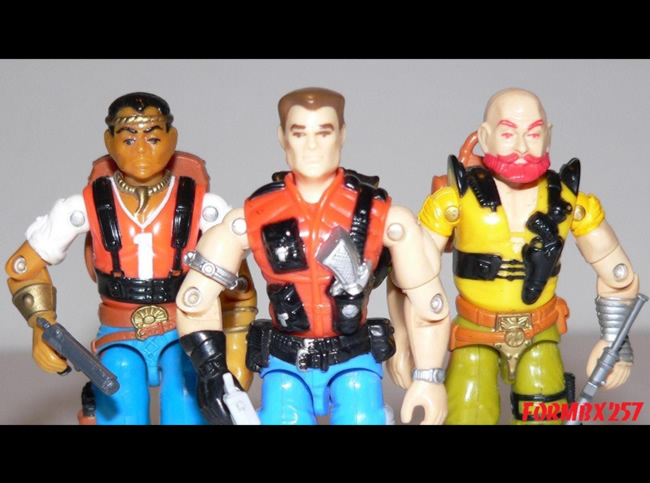 The Renegades toyline came out in support of G.I. Joe: The Movie in 1987. You could only get these three guys together in a three-pack in the United Sates (stupid UK dwellers could get them individually, but we got fucked), which was always a really tough sell for my mom when we’d go to Caldor, so I never got this set. Don’t worry though, she did get me the Cobra-La three-pack, which is probably the greatest three-pack of all time, so she treated me right. Anyway, this pack was discontinued two years later, but the Renegades would return in 2006 as a special release three-pack. Don’t call it a comeback! Five years later, a third variant of each of these guys was released as part of a seven-figure box set called the Slaughter’s Marauders Battle Set, which included the Renegades and Slaughter’s other group, Slaughter’s Marauders.

That’s it for the Renegades, folks. They may have been a bit ornery to Flint in the movie, but you probably would be too if you were constantly being yelled at by Sergeant Slaughter.