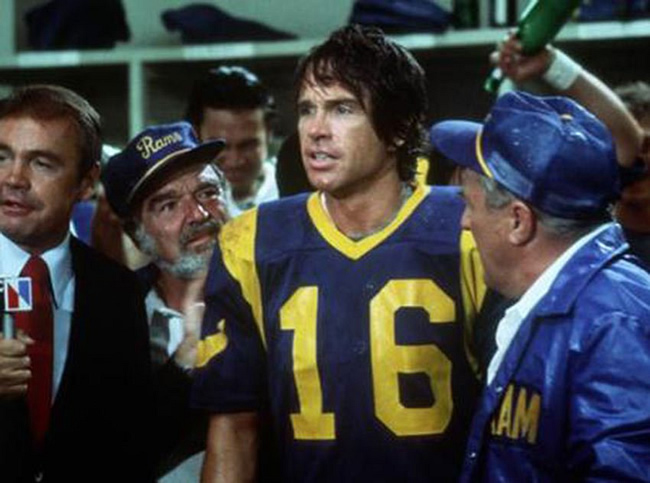 If there’s one thing we love here at Jobu’s Rum, it’s a good sports movie. We’ve also been into the Los Angeles Rams lately, so we’re going to kill two birds with one stone today by talking about Heaven Can Wait, and Academy Award nominated movie written by, directed by and starring the great Warren Beatty. If you don’t remember this one, let me tell you why it’s worth watching.

OK first, here’s the story. Joe Pendleton (Beatty) is an aging Quarterback for the Los Angeles Rams who is coming off of a knee injury, but looking to revive his career and lead the Rams to a Super Bowl win and one last hurrah. After a preseason workout, Pendleton’s trainer Max Corkle (Jack Warden) lets him know that he’s been named the opening day starter. Pendleton goes out for a bike ride to make sure he’s in good enough shape to go, but he is tragically killed by a reckless driver while going through a tunnel. Or is he??

It turns out that a new processor in heaven (or the service that brings people to heaven or hell from purgatory) accidentally jumped the gun and pulled Pendleton’s spirit out of his body too soon. He actually wasn’t going to be hit by the driver at all, and wasn’t due to die for another 50 years or so. By the time the mistake is realized and rectified, and Pendleton is told he can return to his body, his friends and family have already cremated his remains back on Earth. Shit!

An understandably angry Pendleton demands a new body; one in good enough shape to get him back to the big game. After a lengthy search, the processors place him in the body of an eccentric billionaire named Leo Farnsworth, who has just been murdered by his wife Julia (Dyan Cannon) and his assistant Tony Abbott (Charles Groden), who were having an affair. Pendleton enters Farnsworth’s body and soon realizes that Farnsworth’s flagship company is involved in all sorts of shady business. This point is really driven home by Betty Logan (Julie Christie), a British teacher who comes to the Farnsworth estate to protest some of the company’s overseas dealings.

Pendleton dreams up a scheme to get the girl, fix the company, catch the murderers and even play in the Super Bowl, and gets to work on accomplishing all four. In order to achieve the last goal, he enlists the help of former trainer Max. It takes Max a while to believe the man he has just met as Leo Farnsworth is actually his friend Joe, but you know he eventually comes around. Once Pendleton is in good enough shape to try out for the Rams as Farnsworth, he uses Farnsworth’s money to buy the team. Despite taking a hellacious beating from his skeptical new teammates (played by several real Rams, including the great Deacon Jones), Farnsworth/Pendleton succeeds in his tryout. In a bad twist of fate, Farnsworth is finally murdered by Tony and Julia, leaving Pendleton out of the big game again.

The Rams make the Super Bowl while all of this is going on. Shockingly, their starting QB, Tom Jarrett, is killed by a hit on the field during overtime. Well guess what! The processors from heaven send Joe into Jarrett’s body just in time to win the big game! Joe gets to play in the big game afterall, and leads the Rams to a sudden death win! Wowsers. This is a pretty great moment, if you ignore the part where Max and Joe celebrate with each other after the big win, despite the fact that a man is dead and only they know about it… but whatever. In the end, Pendleton assumes the identity of Jarrett forever, causing him to forget his life as Pendleton and Farnsworth, but he ends up getting the girl anyway, because that’s how love works… duh.

While this isn’t a traditional sports movie, it does revolve around the Los Angeles Rams’ search for a title. Beatty is great in the movie, which was nominated for over ten Academy Awards. Beatty himself was nominated for best actor in a leading role, best director and best writer, something he also achieved for Reds in 1981 (Orson Welles is the only other person to achieve this feat). Beatty didn’t win any of the Oscars he was nominated for, but the film did win Best Art Direction, so at least there’s that.

Anyway, even though I gave away the ending, you guys should definitely check this movie out. Watch the trailer below!