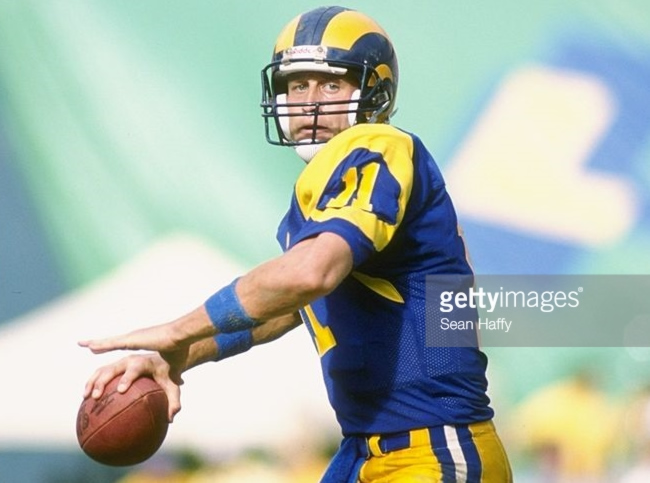 Jim Everett‘s career in Los Angeles was definitely an up and down affair. He had some impressive seasons in the late 1980s, but his play declined in the 1990s, and the fans and media all turned on him rather nastily. It all came to a head in April of 1994, when he attacked then ESPN2 personality Jim Rome. Let’s start from the very beginning (a very good place to start) and see why and how this most shocking incident all went down.

After a stellar career at Purdue (he finished sixth in the Heisman voting in 1985), Everett was taken as the third overall pick by the Houston Oilers. The Oilers couldn’t strike a deal with the New Mexico native, so they traded his rights to the L.A. Rams. After riding the bench behind Steve Dils and Steve Bartkowski for most of his rookie season, Everett started the last six games of the season, and would remain the exclusive starter for the Rams for the next six-and-a-half seasons (excluding the “scab games” started by Dils during the strike-shortened 1987 season). His first few full seasons in the NFL were great. The Rams never won the big game, but they made the playoffs in 1988 and 1989, falling just short of the Super Bowl in the latter year. 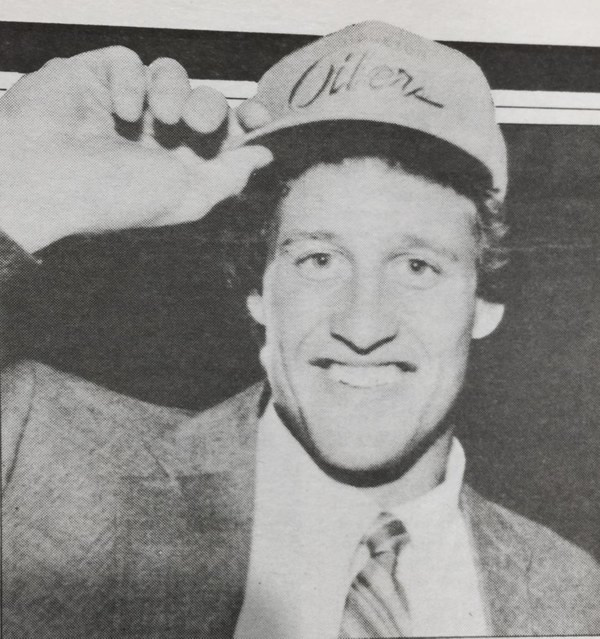 Like hair metal, neon leg warmers and casual cocaine use before him (well, maybe not in Los Angeles), Everett’s popularity wavered when the 1980s became the 1990s. With Hall of Fame Running Back Eric Dickerson gone to Indianapolis, Everett simply didn’t have the level of talent around him necessary for him to be successful. The Rams dipped in the standings and attendance dropped dramatically for the club. At this point, Everett’s negatives–previously hidden by, or ignored because of his success–soon came to light.

One of the biggest criticisms of Everett’s game was his perceived lack of “testicular fortitude.” Simply stated, the guy hated taking sacks, and was viewed to be a bit soft by not only fans and members of the media, but by his own teammates. A lot of this sentiment stemmed from the NFC Championship in 1989, when he was so viciously knocked around by the 49ers that he, at one point, fell to the ground and conceded a sack without ever being touched. Soon, word got out that some of his own Rams brethren had taken to calling him “Chris,” after world famous women’s tennis player Chris Evert (see, it’s funny… because she’s a girl!). By the middle of the 1993 season, Everett had been benched in favor of rookie T.J. Rubley and threatened to fight a reporter, and his Rams career came to an end that offseason (the Rams also moved to St. Louis after the following season).

For his part, Jim Rome is a known asshole, at least on-screen (I don’t know him personally, he might also be an asshole off-screen). Throughout his entire career, he’s never been afraid to speak his mind and confront athletes head on with his criticisms. Starting in the early 90s, Rome took to calling Jim “Chris” at every opportunity he had on tv or the radio, and I guess Jim heard about it. You can see why this would make for a very interesting segment of Talk 2 on ESPN2. Anyway, it seems the wounds left by the bad memories of his perceived treatment by the L.A. Media had left their scars on Everett, because the interview barely lasted a few minutes before the shit hit the fan.

Rome started in immediately, introducing Everett as Jim Everett, before correcting himself and using “Chris.” Everett confronted Rome head on, saying that Rome had been calling him that for many years, and basically told the host that if the name was used again, there was going to be a problem, and ESPN2 would have to take a station break. What followed was a collection of “bet you won’ts,” “bet I wills,” “yuh-huhs” and “nuh-uhs” that have never been uttered with such intensity outside of an elementary school extra recess kickball match up. When Rome capped it all off with another utterance of the dreaded “Chris,” the penis measuring contest ended, and the 6’5″, 212 lb Everett leapt into action. He thrust the table between he and Rome aside and practically tackled the diminutive host to the ground and off of the elevated stage on which the interview was taking place. ESPN cut away, but it was too late. Now, thanks to Youtube, it will live forever.

As I would in any physical altercation involving two professional adults, I’m going to go ahead and say both Everett and Rome are to blame for this bout of fisticuffs.  More accurately, I have to put more blame on Everett than I do on Rome. For one, Everett is the clear physical aggressor in this situation. Secondly, Rome did exactly what he was (and still is) known for. Depending on which side you believe, Everett either knew that Rome might call him Chris or thought he was supposed to be appearing with someone else on the show. Either way, as a professional in that situation, you cannot let someone talk his way under your skin, no matter how much of an asshole he is. This isn’t the schoolyard playground, where you can just pound the loudmouth, serve detention and be home in time for Power Rangers.

Anyway, the incident really put Rome on the map, and has sadly become Everett’s most memorable moments. Forget the fact that this guy was one of the best Quarterbacks in Rams history Forget that he’s first all-time in passing yards for the franchise, and second in completions, attempts, touchdowns and, most importantly, wins. Forget even, that Everett spent four more years in the league after this, three of them as the Saints’ starting QB and one wrapping up his career in San Diego. Let’s just remember the time he lost his cool and tried to beat up a loud-mouthed asshole on “The Deuce.”

No, seriously. Forget all that other stuff. The video below is far more entertaining!