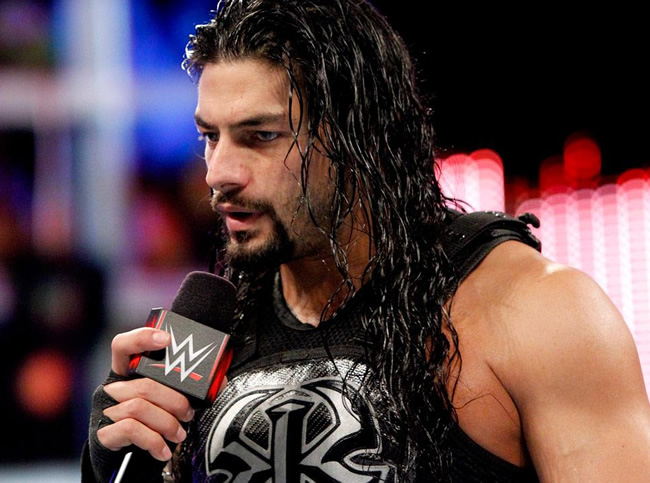 In my last post about the Royal Rumble, I described a scenario where the current story line is good because Roman Reigns can win his WWE World Heavyweight Championship back when he finally gets his hands on HHH at Wrestlemania. As is my right, I have changed my mind. I still like HHH as champion for now, but I think it might be time to abandon this version of the Roman Reigns character. Please allow me to break it down for you.

First of all, I want to make it clear that I still really like the fact that HHH is champion, as relating to the story the WWE is seemingly telling. The Authority was trying it’s best to screw Roman, and they did it. Did HHH need to be world champ? No, but right now, I still don’t think it made sense for anyone else to be champion. They could have had Dean Ambrose win the whole thing, or picked someone random, but a random champion would have been basically a reboot of the championship scene, which I don’t think you do two months before Wrestlemania. Ambrose doesn’t make all that much sense either, because he’s been feuding with Kevin Owens after the Intercontinental belt. While I think he has enough history with the Authority to be able to carry a feud, I think it would have been a bad user experience to keep the story the same, but make Ambrose the focus instead of Reigns in one night. 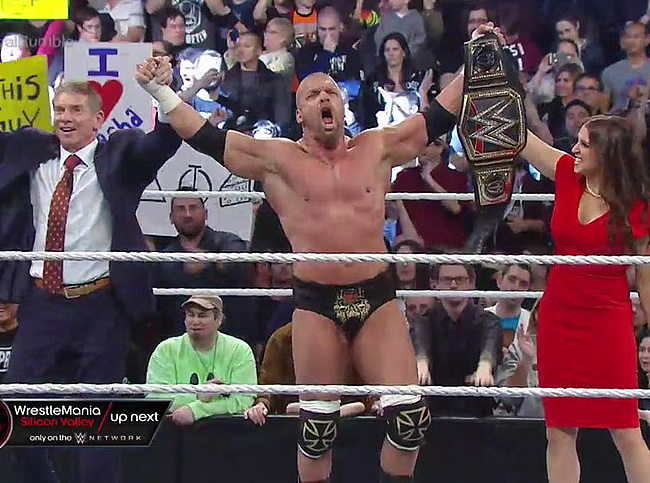 Now that that’s out of the way, let’s talk about the terrible way in which Roman was booked in the Rumble match on Sunday. As we all know, Reigns was plowing along in the match, when the evil Mr. McMahon brought out the also evil League of Nations, and the dastardly quartet proceded to beat the living tar out of our great Samoan hope. Reigns was then walked to the back by medical staff, seemingly too hurt to continue in the match. He returned heroically later, poised to score an underdog comeback victory for the ages. Unfortunately, Vince had an extra trick up his sleeve–his son-in-law in the 30th spot. HHH took advantage of a distracted Reigns to eliminate him, and won the title shortly thereafter by eliminating Ambrose as well. Everybody got that? Good.

OK now, so the story that WWE was trying to tell was that Reigns the hero with the golden heart and the immovable determination to just keep coming back again and again, no matter what Vince and the Authority did to him. Unfortunately they completely mucked it up. First of all, we’re not going to focus on the fact that the League of Nations could have put Reigns out of the match by taking him and throwing him over the top rope, like the Wyatts did to Brock Lesnar later on. We’re going to believe the angle that the heels were so cocky and sure of their prowess, that they just assumed Reigns would be too hurt to continue. Heels are stupid. It’s what they do.

It is fair, however, to establish that this crowd was booing Reigns from the beginning of the match, so they were probably going to shit on whatever he did, but the WWE, again, didn’t even seem to try to pretend they weren’t shoving Reigns down their throats again, which is why the fans hate Reigns to begin with. When the LON took him out, Reigns should have been stretchered out. When he came back an hour later, he should have limped back to the ring, medical personnel trying to hold him back as he ripped IVs out of his arms and what not. They still could have had HHH win, but sympathy for Reigns would be strong, and he’d be set to finally get some fan respect and be a believable and even supported winner at ‘Mania. Even his most ardent haters would have had to admit to his badassery.

Instead, Reigns didn’t get stretchered out. He refused medical attention and eventually basically struggled to the back under his own power. When he came back, he showed no ill effects from the beating he had been given, during which he was splashed through the announce table by a 300 lb monster in Rusev. Instead of limping out, or even being bandaged up and looking worse for wears, he literally ran out to the ring and threw a Superman Punch party. How am I supposed to feel sympathy for that? Reigns had enough left in him to walk to the back, and then what… laid in a hammock in the back drinking beers with Stone Cold while the rest of the roster fought valiantly in the ring for the title? For all we know, that’s what was going on, because WWE never showed him getting any kind of medical attention or anything.

This was made all the worse by the appearance of Kevin Owens later in the match. Owens kicked off the whole PPV with a last man standing match. The match was a pretty brutal spot-fest, with tables and chairs flying all over the place. Furthermore, the finish saw Owens fly ass over tea kettle off of the top rope and through two stacked tables on the floor outside the ring. When Owens’ music hit and it was time for him to head to the ring, he limped all the way down the entrance ramp looking like he was in all the pain in the world. No matter how hurt Owens was from his barbaric match earlier, he was going to come out and fight in the Rumble, because that’s how much the belt means to him. This is a guy whose character is known for bullying weaker opponents, but runing away whenever he’s confronted.

If Reigns had enough life left after the beating to stand up (remember, Owens lost because he was too injured to answer the 10-count), why didn’t he stay in the match to defend his title? He had the most to lose out of everyone in the whole company, and the odds were completely stacked against him. That’s when the babyface is supposed to fight through and conquer. Instead, Reigns walked to the back and took a break for an hour. Doesn’t this seem like something a cowardly heel would do? WWE’s poor booking set Reigns up to look like a bit of a dick, and it certainly did nothing to quell the storm of boos that was rising early in the match. If that’s how Vince McMahon wants his writers to build popularity for his stars, then maybe he’s lost touch with the business.

I really think WWE has ruined a potentially good thing with Reigns. Remember how over he was with the Shield? His character, in both heel and babyface rolls, was red hot with fans. Now, he’s by far the least popular member of the original three-man wrecking crew, and one of them isn’t even going to be wrestling for like six more months. There’s evidence that WWE might be ready to give up on Reigns. Rumor has it that Reigns going out before Ambrose was an audible called so that the fans would boo HHH’s title win, because officials figured the fans would go bonkers for champion HHH if he eliminated Reigns for the win. I don’t know how much truth there is to that, but it’s out there.

On Raw, it was announced that Reigns, who wrestled with Dean Ambrose in the main event, will now face Ambrose and Brock Lesnar in the main event of Fastlane next month. The winner of the three-way will go on to face HHH for the belt at Wrestlemania. I honestly don’t have any idea as to wat they might do here. Lesnar is the company’s top attraction right now, so it makes sense to have him win. Reigns winning would continue his redemption story against the Authority. Ambrose winning would be a total wild card, because he’s not yet established as a top-of-the-line babyface. He’s up there in the second tier and growing, but I don’t think he’s ready to be WWE Champ just yet.

I think the WWE needs to go elsewhere with Reigns. I don’t know if they need to bail on Reigns completely (for the second year in a row), or see this through to the bitter end, but at some point they have to change Regins’ character. It’s not working. Maybe turning heel and finally joining the Authority might work, but it might be too late for that too. Frankly, I think I just need a break from Roman. What do you guys think? What should WWE do about their Roman problem?