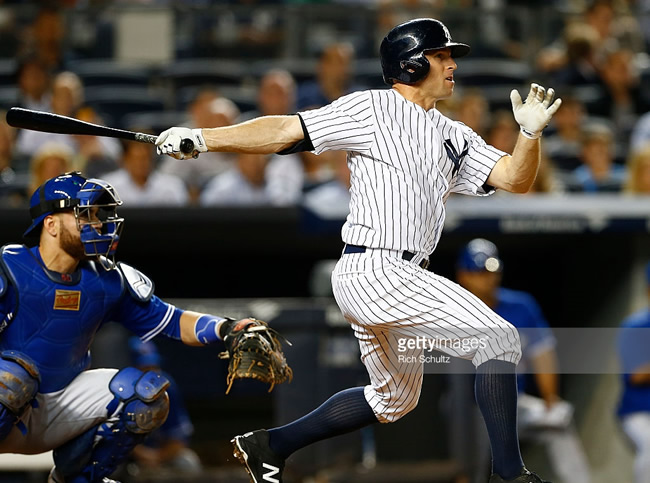 On Monday night, we watched Slade Heathcott win a big time game for the Yankees with an unbelievably clutch three-run homer with two outs in the top of the ninth. Now, I don’t want to jump the gun and anoint him as the left fielder of the future, but Heathcott’s performance in his brief time with the Yankees this season, and the fact that Brian Cashman has said the Yankees probably won’t be pursuing any big names on the free agency market, has me thinking. Should they finally trade Brett Gardner this offseason? Let’s explore.

Let me be clear about one thing here. I don’t want the Yankees to trade Gardner, at least not in an ideal situation. Ideally, they’d trade Ellsbury, slide Gardner over to centerfield and plug Heathcott, or even Mason Williams or Aaron Judge, a chance to win the left field job in the spring. Unfortunately, unless the Yankees are looking to eat a lot of money in any potential deal, Ellsbury is not going anywhere. Also, I’m going to go ahead and point out that the idea of trading Gardner is certainly not an original one. I feel like this is a discussion we have every offseason. However, I think that Gardner’s window as an effective trade chip will eventually close, and the Yankees should strike while the iron is hot, if they’re ever going to strike at all.

First of all, let’s talk about Gardy, and all he has meant to this team. I know that, other than the last week or so, the second half has been a complete struggle for him. That being said, when you look at the back of his baseball card after this season, it’s going to say that he had possibly his best season in the majors. So far this season, Gardner is hitting .269/.354/.428 with 26 doubles, 3 triples, 16 home runs, 65 RBI, an OPS+ of 117 and 19 stolen bases. At 32 years old, he’s currently setting career highs in OPS, OPS+ and RBI, and he has a chance to set highs in batting average, home runs and runs if he gets it going a bit here in the last few weeks of the season. He is also signed through 2019, when he will just have turned 36. I say these things so that we all realize just what kind of a player the Yankees would be potentially giving up in a trade.

While one could argue that the Yankees should keep a 32-year old player who is putting up those kinds of numbers, you could also make the case that, because he’ll soon be in his mid thirties, the time to cash in is now. This brings us to the statements made by Brian Cashman a couple of weeks ago. Cashman indicated that, as the team’s bigger contracts come off the books over the next couple of years, they will focus more on replacing from within where possible. Sadly, this probably means no Justin Upton, Jason Heyward or Yoenis Cespedes coming in to play outfield, and probably no David Price, Jordan Zimmermann or Johnny Cueto to put the starting rotation over the top next season. Oh well, right?

As much as I’d love to see some of those guys in pinstripes, waiting for contracts like those of CC Sabathia, Alex Rodriguez and Mark Teixeira (as good as the latter two have been this season) to come off the books has not been fun. It might be best for the team to not hand out another huge contract, especially to a pitcher in his thirties. Even Price, who is 30, will eventually be what CC Sabathia is now–just another aging lefty.

Anyway, if they’re not going to sign anyone good, but they still want to upgrade the rotation, the bullpen, or perhaps even one of the infield positions (they’ve shown less than full confidence in Rob Refsnyder, for example, and I can’t stomach another year of Stephen Drew and Brendan Ryan splitting time), they’re going to have to make trades. If they are fully committed to not trading away their top prospects, they have to trade someone. There are only a few players with affordable contracts and good trade value on this roster right now. Didi Gregorius has been tabbed as the shortstop of the future/present, and has performed amazingly in the second half, so I doubt he’s going anywhere. Ivan Nova could be dealt, but at this point he would probably have to go in a package deal with someone else. Adam Warren? Same thing. Dellin Betances is not going anywhere. That leaves pretty much Gardner as the only reasonably priced and established big leaguer on this roster that could bring back some value.

I’m not here to evaluate what the Yankees could get back for Gardy, but a middle to lower end of the rotation starter, a solid reliever or a talented second baseman, aren’t out of the question… I don’t think. Gardner is at peak value, and, despite having developed his power quite a bit the last two seasons, his game is speed. Not too many guys escape their mid-thirties with all that velocity intact. The Yankees could trade Gardner for help and give one of the kids a shot at winning the job in March, or they could pick up a one year guy that can be released midway through the season when one of the kids is ready.

The Yankees seemed heavily committed to rebuilding from within, but there isn’t room for all the kids on the roster right now. Also, there aren’t enough kids to solidify all of the holes in the roster. They have to do something. If Gardy’s the one to go, they have to cash in on him while he’s at his absolute best. All that being said, I hope they keep Gardy, sign David Price and trade a couple of the kids and Ivan Nova for another good starter.