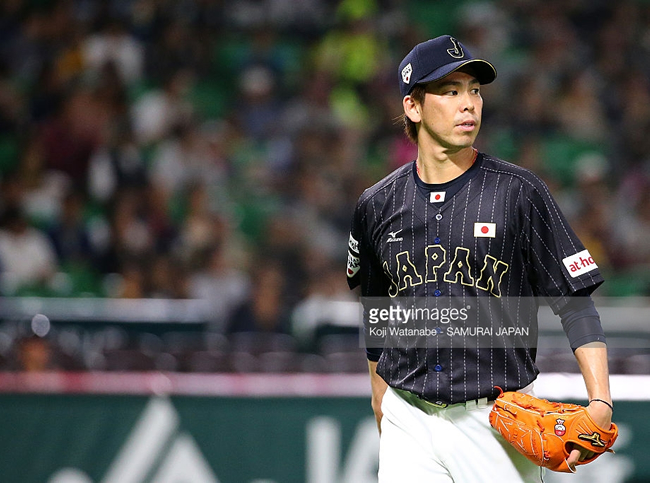 First of all, let’s establish one thing. Kenta Maeda, considered one of the best pitchers in Japan, has not officially been posted by his NPB team, the Hiroshima Carp. He has merely requested to be posted. That being said, if he’s posted, should the Yankees be involved? Let’s take a look.

How does he do it? Well, he doesn’t have Yu Darvish‘s fastball, Masahiro Tanaka‘s splitter or any particularly elite offering, but his game is based on command and control. His fastball sits anywhere form 87-92 mph, but it’s his secondary pitches that really help him rack up the awards. He has a low 80s slider that is considered his best offering. It has true a true strikeout break to it, but he can control it and use it to throw strikes to either side of the plate. You can also be on the lookout for his “Bugs Bunny” changeup, a pitch that sits in the low 80s, but also breaks to the armside, which isn’t very common. Did I mention his 12-6 curve ball? It comes in in the 70s, and drops off the table like crazy. Finally, he throws a sinking two-seam fastball, known in Japan as a “Shutto.” He mixes all of his pitches with pinpoint control, and that’s what makes him dangerous.

There are definitely some concerns to Maeda’s game. Despite only being 27, he’s already thrown over 1500 innings in his career. His size is also a concern, because although he’s never missed significant time due to injury, the strain of pitching every fifth day against much better competition, as opposed to once a week against the lesser competition of the NPB. Furthermore, he’s not a strikeout pitcher, as you can see from the 7.4 K/9 career average. While that’s not the worst average ever, it’s not too great. Also, because he doesn’t have top tier arm strength, anything he hangs or misplaces in the zone is going to get hit, and hit hard.

He also projects as a number three or four starter at best in the major leagues, but will cost teams quite a bit of money to sign. First of all, there’s probably no way the Carp release him for anything less than the $20 Million max posting fee. Then, he’s probably looking at a four or five year contract worth probably $15 or $16 Million per year. Would teams be willing to spend that much on an untested foreign asset like Maeda, rather than shelling out a similar deal to guys with big league experience, like Wei-Yin Chen, Mike Leake or Jeff Samardzija?

As far as the Yankees go, I think they should probably be in on the bidding. It doesn’t hurt them to offer up the max posting fee and enter negotiations with Maeda, assuming that someone else also matches the max. They don’t have to get into a bidding war with anyone. They’re also not desperate to spend that much on a starter, and could probably swing a deal for someone younger and just as good, if not better, if they use Brett Gardner or Andrew Miller as trade bait.

I think, until we see how the Miller and Gardner situation pan out, that the Yankees should stay out of this one.