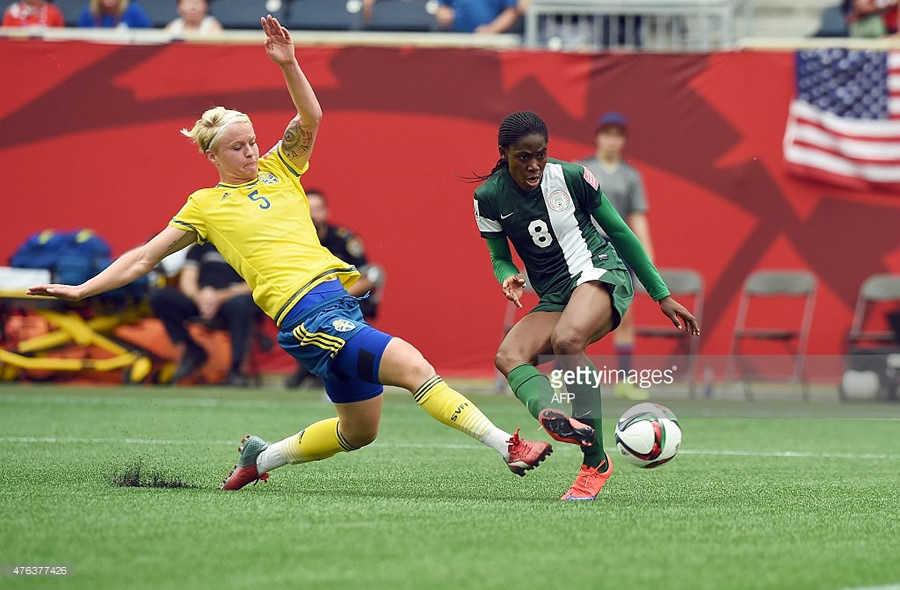 Did everybody catch that Nigeria vs. Sweden game to open up the Group D portion of play on Monday afternoon? If you didn’t, holy smokes did you miss a good one! Nigeria, the team everyone’s predicting will finish last in the group, came out and stood tall against the Swedes, tying the fifth ranked team in the world in a 3-3 barn burner. Beyond picking up the point, however, Nigeria accomplished one thing: they showed the world that their young and talented women are ready for the big stage–none moreso than Forward Asisat Oshoala. Let’s delve into the game and get to know her a bit better too.

First, the game. It didn’t look good early for the Super Falcons (Super effing falcons! I can’t get over that name!), as Sweden took a quick 2-0 lead on corner kicks. One of them was an unlucky own goal off the chest of Nigeria’s Desire Oparanozie in the 21st minute, and the other was by Nilla Fischer in the 31st. That was the score heading into the half, which made Nigeria’s potential cinderella story seem rather impossible. However, Oshoala put the team on her back in the second half, and things were much different.

The 20-year old from Ikorodu, Nigeria had some brilliant moments in the first half, but ended up with nothing to show for it. Just ten minutes into the second half, she finally made her impact on the scoreboard, setting up teammate Ngozi Okobi for a score in the 50th, and netting one herself just three minutes later, when she was left with a one-on-one with Swedish goalkeeper Hedvig Lindahl. Things once again got bleaker for the Super Falcons in the 60th minute, when Linda Sembrant scored to put the Swedes up 3-2, but Nigeria would equalize when Francisca Ordega dramatically put one home in the 87th. Nigeria had a few more chances late, but were unable to take the three points. However, the point they managed to get was much more than anyone expected. They definitely sent a message to the rest of the group that three points are not a given when you face this Nigerian squad.

Oshoala was the biggest part of all of that. Not only did she assist on one goal and score another, she made it pretty apparent that she was the best player on the pitch all game long, dribbling around Swedish defenders and setting up various chances for her teammates. She showed the pace, touch and toughness that has had the fútbol world buzzing since she led Nigeria’s U20 to a second place finish in the 2014 U20 Women’s World Cup, and the senior club to the African Women’s Championship later that same year. She really showed yesterday why she’s regarded as one of the best up-and-coming players in the world, and why she was named the first BBC Women’s Footballer of the Year Award last month. “Superzee,” as she is known by her teammates, who plays her club fútbol for the Liverpool Ladies of the Women’s Super League, has definitely arrived, and her young teammates have too. Their three goals today were scored by three young women who are all 21 years of age or younger, and there are only four players even over the age of 24 on this squad, which means Nigeria could be a World Cup force for many years to come.

If Nigeria keeps playing like this, a third place slot into the knockout rounds might not be so far fetched at all. Who knows, they might even upset one of the other big teams and take second. I can’t wait to find out.