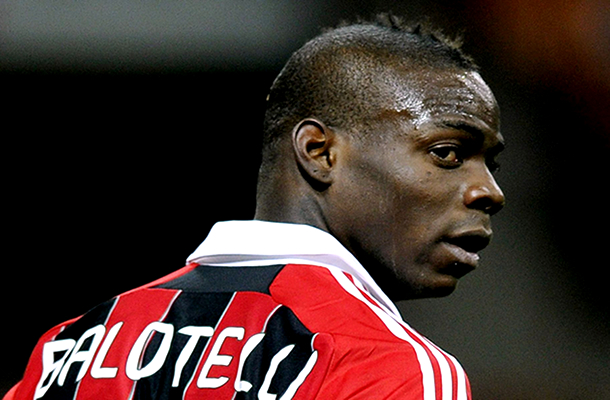 Just after the World Cup biting incident, Liverpool sold superstar striker Luis Suárez to Barcelona. As good as Suárez was, you kind of got the feeling that the team didn’t want to risk another “incident” from the volatile and unpredictable Uruguayan. Showing that they are not a club that would ever make the same mistake twice, they signed Mario Balotelli: a talented but volatile and unpredictable… Italian! That’s way different! Seriously though, Balotelli is one of the best young strikers in the game, and Liverpool is lucky to have him. Let’s discuss some of the details of this deal.

Liverpool and Balotelli’s Seria A club, A.C. Milan, have agreed to a roughly £16 million ($26 million) deal that will send Mario back to the premiere league, where he played from 2010 to 2013 with Manchester City. This transfer has some Liverpool fans, and fans of the Premier League in general, wringing their hands a bit, because Balotelli’s last run through this league was somewhat of a disaster, and people are worried that leaving his home land again will resurface the personal and professional gaffes that marred his time with The Citizens.

Balotelli during his time with Manchester City.

What gaffes? Well, he once stomped Scott Parker of Tottenham Hotspur, and that wasn’t even one of the many red cards he received during his time in Manchester City (the ref didn’t see that one). He had some off-field incidents as well–the fireworks out the window incident and the “Why Always Me?” t-shirt among them. There was also that whole “allergic to grass” thing. By the end of his time with the Man City, things got so bad, that Balotelli was on the verge of taking the club to the Premier League tribunal because the team had docked him two weeks pay for his disciplinary record (Mario eventually dropped the case). Needless to say, when Man City sold him back to Italy, everyone kind of sighed in relief.

All of that being said, Balotelli is still one of the best strikers in the world. He’s got the size, speed and skill to be one of the best players in the Premier League right now. He also has a very powerful shot, that has made him an indispensible asset at penalty kicks and set plays. He will undoubtedly continue to be a polarizing figure in this sport–loved as almost a cult figure by his supporters and loathed to the depths by his detractors. I have a feeling that, if he can keep his head and continue to display the maturity he has showed during his latest run at A.C. Milan, he’s going to win a lot of those detractors over. It’s hard to hate the guy leading the league in scoring… just ask Súarez.