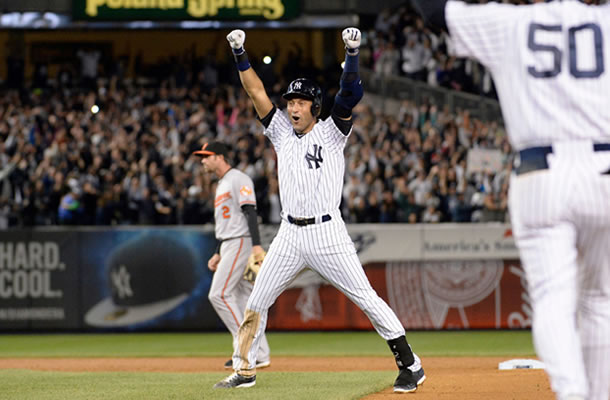 It’s late, and I’m not quite sure how to organize my thoughts on this moment right now, but was that not the most “Jeterian” (as Michael Kay would say) thing anyone’s ever seen? Was there any doubt he’d inside-out the ball through the hole between first and second base, like he’s done hundreds of times in his career? Was there any doubt he would then congratulate the Orioles on their way to the post season during a moment that was designed to be 100% for him? Just another amazing moment in a career full of them.

Derek Jeter leaves Yankees Stadium the way he came in; with class, dignity and respect for everything about the game of baseball. Tonight, baseball says goodbye to one of the classiest players to ever play the game. Not gonna lie, it was getting a little dusty in Jobu’s living room.

Thank you, Derek. I can’t believe it’s all over.

I can’t even right now.

One thought on “Goodbye, My Captain”