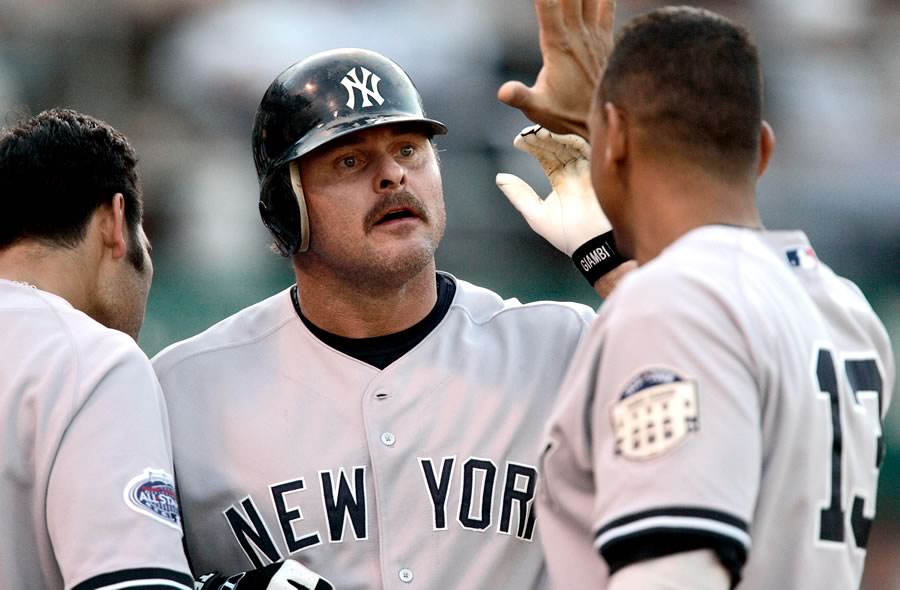 [dropcap]T[/dropcap]he world found out today that Jason Giambi, formerly of the Oakland Athletics, New York Yankees, Colorado Rockies and Cleveland Indians, has hung up his cleats and called it a career. Giambi has been pretty much equally known for his bat, his use of performance enhancing drugs and his lovable locker room presence at one point or another during his career. His has been a bit of an odd journey, but I’ll definitely miss Jason and his tater-mashing bat. Let’s take a look back at his career, and say our goodbyes.

The West Covina, CA native, who played his college ball at Long Beach State in California, was drafted in the second round of the 1992 draft by the A’s, and quickly fired through their system, and even represented the United States in at the Barcelona olympics in 1992. He never showed that much power in the minors, but hit his way to the big leagues anyway, and made his debut on May 8, 1995 as the DH against the Texas Rangers. Giambi would eventually become and every day guy, adding some muscle and hitting 73 homers over the next three-and-change seasons. He was also known for his partying, a gold slump-breaking thong, motorcycles, tattoos and long hair. Everything you’d expect from a native Californian, right? Basically, fans loved him.

In 1999, he took his game to a whole other level and began a streak of dominance rarely seen before by A’s fans. From 1999 through 2001, Jason slashed .330/.458/.617 with 114 homers and 380 RBI. Sure, A’s fans had seen power like that before from Mark McGwire, but hadn’t seen that kind of power and average combo since the early days of Jose Canseco. That proved to be a fairly appropriate comparison when, years later, Giambi sort of admitted to taking PEDs, but let’s not go there yet.

After that 2001 season, Giambi signed a seven year deal with the Yankees that was worth $120 Million dollars. His first year in pinstripes, Giambi proved to be worth every penny, as he slashed .314/.435/.598 with 41 homers and 122 RBI. A year later, he still managed to hit 41 dingers and drive in 107, but the decline in average pointed to an overall decline in skills that became very apparent in 2004. Giambi was riddled by injuries that year, and managed to hit only .208 with 12 homers in 80 games.

The next year, he got off to such a horrible start, that people thought he was done. It didn’t help that he showed up to camp looking extremely physically deflated, apologizing to the media when he was questioned about the then ongoing BALCO scandal, but never really saying what he had apologized for (it was pretty obvious from the news going around, and his lack of water weight, that it was steroids). Anyway, Jason rebounded and ended up hitting 32 homers, but he simply wasn’t the same player. He still walked plenty, and hit plenty of home runs during his last couple of seasons in the Bronx, but he never really lived up to his huge contract. Overall, however, he ended up slashing .260/.404/.521 with 209 homers and 604 RBI, which I guess you take over the course of seven seasons, right?

After his Yankees deal ended, Giambi signed on for a second stint as a DH/bench player for the A’s, but was released in August and signed with the Rockies. With the Rockies, he kind of reinvented himself as the lovable, wacky party uncle. He was beloved by fans and seemed to flourish in the part time role, even hitting 13 homers in 64 games in 2011. He nearly won the managerial job after the 2012 season, but ended up signing with the Indians to play a bench role on Terry Francona‘s new club. Francona basically fell in love with him as a clubhouse guy over the last two seasons.

Today, at 43, Giambi’s playing career – and a hell of a career it was, controversy or not – has come to an end. He finished with 440 home runs over his 20 years, and made a lot of fans along the way, but it’s over now. However, I’m actually excited for him moving forward. If Francona doesn’t hire him to coach now, he’ll most definitely be willing to recommend the Giambino for any spot around the league, so I don’t expect Jason to sit at home for too much longer than he wants to. Congratulations, Jason. We’ll meet again real soon.

Check out one of Jason’s most famous Yankees homers: