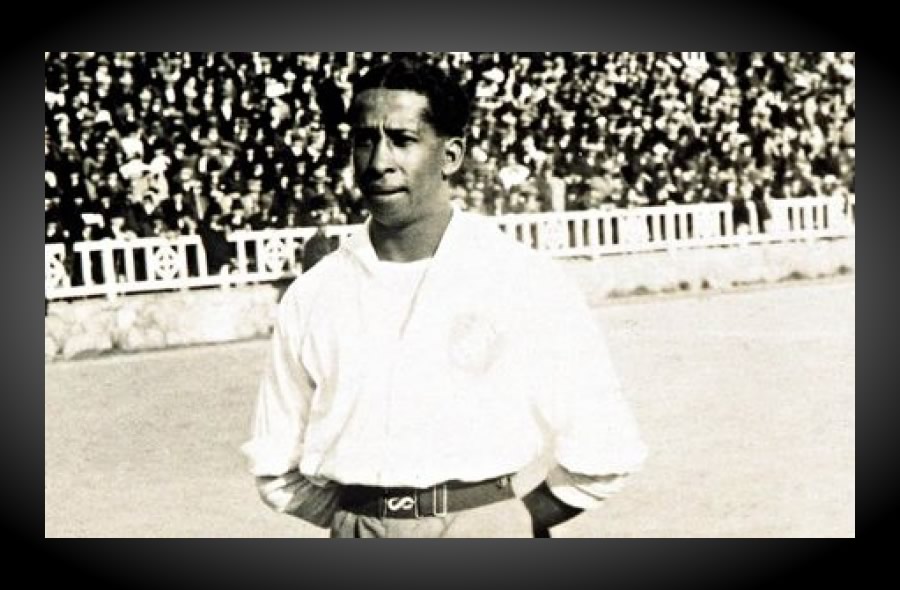 Usually, in the Get to Know A Uruguayan series, I introduce readers to current Uruguayans who will impact whatever current tournament is happening in the world (in this case, the 2015 Copa América). This time, however, I decided to take a more historical approach to the series. As Uruguay attempts to win its record 16th Copa América, let’s take a look back at one of the men who helped them win it three times in the 1920s–José Leandro Andrade.

Most casual fútbol fans probably won’t know who Andrade is or was, but he was considered, at one point, one of the most beloved players in the world. Andrade’s story began on November 22, 1901 in Salto, the capital city of the department (state) of Salto in Uruguay. You might know Salto as the home town of two current Uruguayan superstars, Edinson Cavani and Luis Suárez, but it was Andrade’s home town first. Little is known about Andrade’s family life. Legend has it that his father had escaped Brazilian slavery and was 98 years old when Andrade was born. The elder Andrade may or may not have had magical brujería powers too, depending on who you talk to. There’s also a rumor that José worked as a gigolo in his younger years, experience that would help him out later as he toured Europe with La Celeste. We’ll talk a little bit more about that later, but let’s try to focus on his work on the pitch for now.

Known back then as “La Perla Negra (The Black Pearl) or “La Maravilla Negra (The Black Marvel/Wonder),” Andrade made his first big splash in 1924, when Uruguay traveled to Paris for Olympic Games. Because there was no World Cup back then, the Olympic Games were considered the world championships back then (FIFA currently recognizes Olympic championships before 1930 as world championships). There was no team as dominant as the Uruguayans were in the 1920s, and Andrade helped them prove as much in Paris.

With Andrade at dominating both sides of the ball as a half-back (like France’s Zinedine Zidane in 1998), Uruguay steamrolled the competition in 1924, handily winning every game they played on their way to the gold medal. In all, they outscored their opponents 15-1 (including a 7-0 drubbing of Yugoslavia in the opener), with Andrade taking Paris by storm during the tournament. His legendary play actually helped Uruguay become a big time box office draw for the French public. Not much was known about Uruguay’s team at that time, and only a few hundred fans showed up for their first couple of games. As word spread about Andrade’s prowess on the pitch, however, so did the crowds. By the time the final rolled around, the Uruguayans were playing in front of 60,000 people, with 10,000 out on the street unable to get tickets.

An excerpt from an article in The Guardian, by Brian Oliver, says it best:

During a tour of Europe following the World Cup, over 800,000 people paid to watch José play fútbol. He became a truly global icon, helping to bring international popularity to the sport, and he was one of the most iconic black athletes of the day. It is said that he was also quite a hit off the pitch (as I alluded to earlier), as he was often seen partying and hanging out with several luscious ladies, including some of the biggest sex symbols of Europe at that time. It is actually rumored that he contracted syphilis during that trip (shocker, right?), a disease that took a considerable toll on his health and career. Despite that, he still found the strength to play for Uruguay in the 1928 Olympic Games in Amsterdam, where Uruguay won again. In the semifinal of that tournament, Andrade ran into a goal post, causing an injury that many believe eventually caused him to go blind (others believe it was the syphilis, but who can be sure?).

In 1930, despite the fact that he was past his prime and his star had begun to fade, Andrade helped Uruguay win one more big championship, playing in every game in the inaugural World Cup. He scored a goal, and was even named to the equivalent of the All-Star team at right half-back. To the delight of their home crowd, Uruguay beat Argentina 4-2 in the final to take home the trophy, known as “The Goddess of Victory,” capping the little country’s decade of dominance. Few other figures had as much to do with that dominance as did Andrade. He was one of the most decorated athletes in Uruguayan history, winning gold medals in 1924 and 1928, the World Cup in 1930 and throwing in Copa Ámerica titles in 1923, 1924 and 1926. He even won three Priméra titles on the club side; two with Peñarol and one with Nacional.

Unfortunately, José’s story does not have a happy ending. After retiring from the game in the late 1930s, Andrade fell into Alchoholism and poverty, only really emerging in public during the 1950 World Cup, when he was invited by Uruguay as a guest (his nephew, Victor Rodriguez Andrade, played on the team). After that, he became a ghost, and wasn’t heard from until 1956, when a German journalist living in South America named Fritz Hack, set out to find the legendary player.

“Friends helped me. But what I found was horrible”, Hack reported. The once famous and celebrated Andrade lived in a dilapidated basement flat in ‘Calle Perazza’. ‘In a spartanly furnished room I found Andrade, a total alcoholic and blind in one eye, a consequence of the injury. He could no longer follow my questions, which were answered by his beautiful wife, the sister of one of the former Olympic champions.'b

A year later, José Leandro Andrade was dead, at the age of 56. He may have died with nothing, but we should all make an effort to remember what he did for not just for Uruguay, but the entire sport of fútbol. He was Pelé before there was Pelé; truly a legend of the game, who should be recognized as such.

Highlights from the 1924 Olympics (Get your Spanish/English dictionaries ready)