Warning: "continue" targeting switch is equivalent to "break". Did you mean to use "continue 2"? in /nfs/c11/h04/mnt/193474/domains/jobusrum.com/html/wp-content/plugins/wp-author-box-lite/includes/ReduxFramework/ReduxCore/inc/extensions/customizer/extension_customizer.php on line 478
 Get to Know A Uruguayan: Gonzalo "Gonchi" Rodríguez | Jobu's Rum
Skip to content 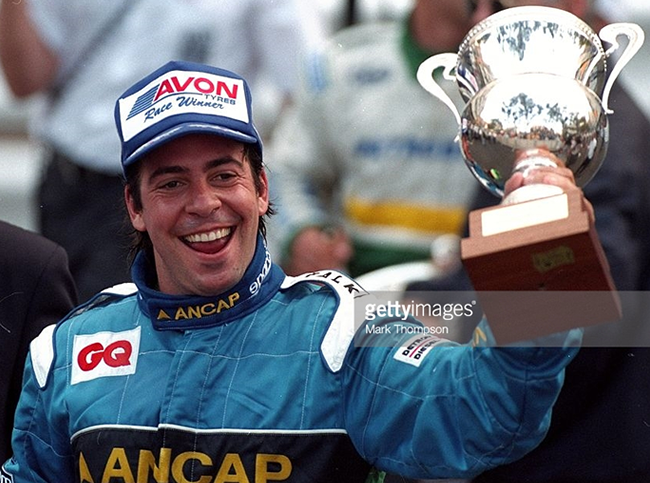 I was browsing through Netflix the other day when I came across a documentary called “Gonchi.” I noticed it because the show art is a photo of an open wheel race car driver in his car. Now, you guys should be familiar with our love for “Senna,” another documentary about a driver that Papa Wheelie reviewed a few years ago, so you know that I’ve always been intrigued by the race cars. Anyway, when I read the description, I knew I had to watch it. It reads:

A race car driver from Uruguay, a land with no racing tradition, dreams of becoming a Formula 1 champion, and fights his way toward the top.

Well, now you know that not only was I going to watch the doc, but the wheels started spinning (see what I did there?) for an all-new Get To Know A Uruguayan post about this man, Gonzalo “Gonchi” Rodríguez. I quickly found out that this was not a documentary about a guy who made it big in racing, but rather, like Brazilian great Ayrton Senna’s, a tragic tale of a promising career and life cut short because of a bad wreck. I figured today would be an appropriate day for this post, because it is the 16th anniversary of his death, which happened on September 11, 1999. Let’s get to it.

Gonchi Rodríguez was born on January 22, 1971 in Montevideo, Uruguay (my hometown as well), and to hear his friends tell it in the film he was competitive from day one, doing anything necessary to win even a bicycle race and not too shy about using his feet to throw his buddies off his trail (and possibly their bikes). After dominating the karting and Formula 4 circuits in Uruguay as a youngster, he sat down with his father and they decided that, if he was going to be a racer as his profession, he needed to go to Europe.

He had successful runs in Formula 3 and Formula 2 in England in 1995 and 1996, but his biggest move was joining the Formula 3000 circuit, which he did in 1997. His best finish was sixth that season, but he showed plenty of promise. The next year he joined Team Astromega, also in Formula 3000, and finally got his first win at Spa-Francorchamps in 1998, winning a second race in Nürburgring later in the season. The film captures his first win with a funny anecdote: Gonchi refused to take the podium unless they played the anthem and got him a Uruguayan flag–something the race officials were completely unprepared for (Uruguay doesn’t have much of a reputation in the racing world, and no one expected him to win). Anyway, he finished third in overall points for the season. The next year, he had his most impressive win to date, taking home a cup at Monaco and finishing third in the points again.

Because of his success in Europe, and his reputation as a voracious competitor–nobody was sure if he was aggressive because he wanted to win, or if he was just plain crazy out there on the track–he earned a shot as the great Al Unser, Jr.’s teammate on the Penske Racing team in the America-based CART circuit. From the days of racing in front of nobody in Uruguay he had made it all the way to the cockpit of the famous Marlboro cars even casual race fans can probably recognize. He finished 12th in his first race in Detroit, earning a point in the standings and the respect of his peers. This would, unfortunately, be the only race he would finish in the CART series.

On September 11, 1999, Gonchi arrived at Laguna Seca Raceway in Monterey, California, ready to go for his second CART race. That morning, during a practice lap, he nearly crashed when his accelerator stuck around a notorious turn dubbed Corkscrew Corner. He was able to correct it at the last minute, and the team spent the rest of the day addressing the issue in the shop. Gonzalo was shaken by the incident, and gave a phone interview with a Uruguayan reporter that night describing his fears. The film also does a good job of telling us about phone calls he made to his family that day, telling them about the fright he’d endured, but also about how happy he was with his life in racing.  Assured that the issue was fixed, Gonzalo began pole qualifying. He made it through a few laps with very encouraging times, but tragedy struck around that same corner: his throttle stuck again, sending his car into a guard rail at 140 mph. He flipped off the track, landed upside down and died pretty much instantly. He was 28 years old. Again, the film does a wonderful job of covering reactions to the accident, and the funeral processions, so just go watch it.

If there is a silver lining to all of this, it’s that his death, along with others in the sport, have led to some great new safety measures that save lives probably every race. It’s also especially fitting that we remember Gonzalo today because a next generation Uruguayan racer, Santiago Urrutia, is competing at the very same track this weekend with a chance for glory: Urrutia currently sits atop the Pro Mazda Championship circuit standings and is trying to bring home the title at Laguna Seca, the season’s last race. I can’t think of any better way to honor the memory of Gonzalo “Gonchi” Rodríguez, and all he did for the sport of racing in Uruguay, than with a victory by Urrutia. Here’s wishing the youngster luck, as we remember the life of Gonchi.

Just make sure you go watch that movie, even if you’re not Uruguayan, or a racing fan.

Watch the trailer for Gonchi below: