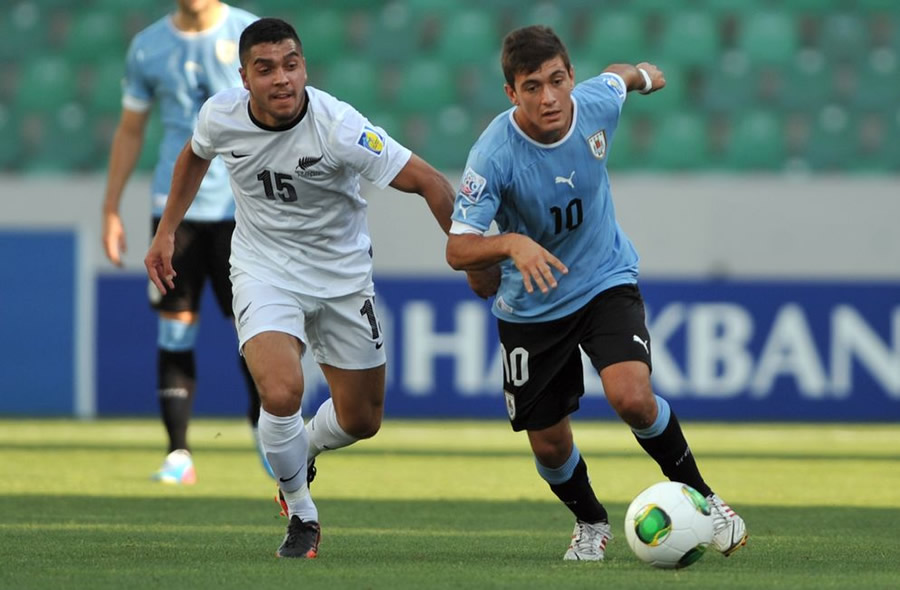 As we continue our 2015 Copa America coverage, it’s important that we meet the newest generation of Uruguayan players. Last time, we got to know Diego Rolán, the man who is being tasked with replacing the suspended Luis Suárez. Today, we’ll meet another youngster who is looking to step in to possibly fill the role left open by Diego Forlán, attacking midfielder Giorgian De Arrascaeta. Let’s get to know La Celeste’s new “numero 10!”

De Arrascaeta was born on June 1st, 1994 in Nuevo Berlin (a town that was founded by German transplants in the 19th century that had a population of just 2,450 as of 2011), Uruguay. Like Rolán before him, Arrascaeta also got his start in the Defensor Sporting youth system. He made his senior level debut in October of 2012 and scored his first Priméra goal that March. in a 3-0 Defensor win over El Tanque Sisley. He was on the the Defensor team that won the 2013 Clausura, and his impressive run during the 2014 Copa Libertadores (like the Champions League of South America) garnered him some attention from abroad.

One of the first teams to come calling was Internacional, of the Brazilian Serie A. De Arrascaeta had a deal in place to make the change to the Colorado, but the deal fell through, and he ended up signing with rival Cruzeiro on a €4 million this past January. He’s played fairly well for La Bestia Negra (The Black Beast), scoring five goals across all competitions so far. If he keeps this up, we might see him in Europe soon enough, possibly this summer if he has a good enough showing at the Copa (If Cruzeiro is willing to sell so early, they do own 50% of his economic rights).

De Arrascaeta’s international resume is not as advanced as his club team one. He played on the same U20 World Cup runner-up squad as Rolán in 2013, and finished second on the team in goals with two (Udinese’s Nicolás Lopez had four in the tournament). He received his first senior club call up last September for a friendly against South Korea. Overall, he’s played five games for the big Celestes and has one goal, which came just a couple of weeks ago in a friendly win against Guatemala (Rolán also scored in that game). Giorgian was named to the 23-man roster for the 2015 Copa América and made his debut against Jamaica, playing 26 minutes as a second half sub. Hopefully, that’s the first of about 100 or so of those Celeste caps.

I almost hate that I kept mentioning Rolán in this profile about Arrascaeta, but I feel that their fates for La Celeste will be intertwined, as they could be the ones that help them make a splash at Russia 2018 (assuming Uruguay qualifies), and could be the key guys heading into Qatar (or wherever that ends up) 2022. I’m looking for a lot from these two men, and only time will tell which one ends up with the better Uruguayan legacy.

Check out some highlights. See what the kid can do.

9 thoughts on “Get to Know A Uruguayan: Giorgian De Arrascaeta”