Warning: "continue" targeting switch is equivalent to "break". Did you mean to use "continue 2"? in /nfs/c11/h04/mnt/193474/domains/jobusrum.com/html/wp-content/plugins/wp-author-box-lite/includes/ReduxFramework/ReduxCore/inc/extensions/customizer/extension_customizer.php on line 478
 Get to Know A Uruguayan: Carlos Sánchez | Jobu's Rum
Skip to content 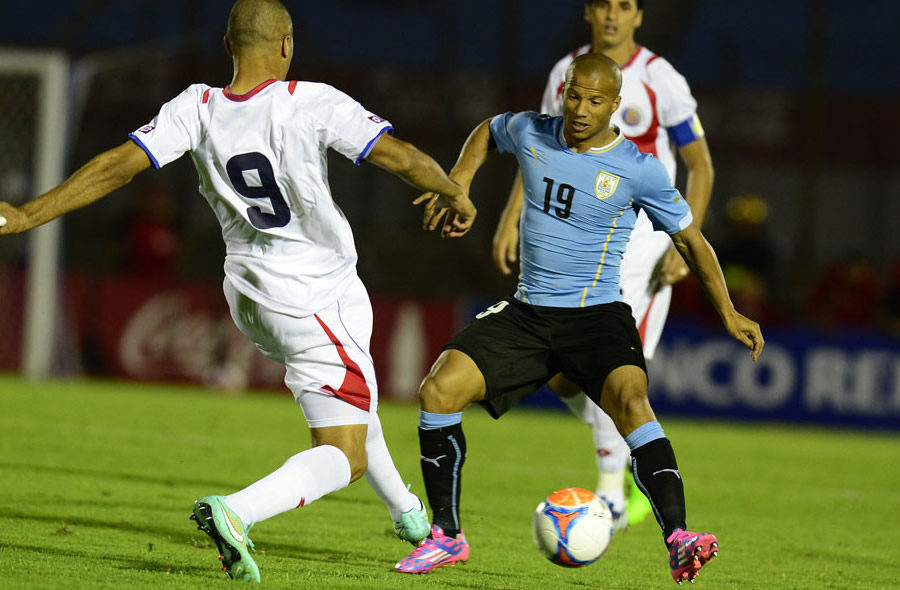 Since the beginning of the 2015 Copa América tournament, we’ve been profiling some of the newer generation of players that head coach Óscar Tabárez chose to bring with him to Chile. Today, we’re profiling a man who I wouldn’t exactly say is a member of the next generation, but he’s new to the team nonetheless. Let’s get to know attacking midfielder Carlos Sánchez!

Carlos Andrés Sánchez Arcosa, or “Pato” (Duck) as he is known, was born on December 2, 1984 in Montevideo, Uruguay. The 30-year old got his club career started with Liverpool FC (no, not that one), making his debut with their senior team in 2003. According to TransferMarkt.com, he was loaned out to the Venezuelan side Aragua FC in 2007, although I haven’t been able to find any statistics on his time there. Anyway, he ended up playing 107 games and scoring two goals for Liverpool, before moving on in 2009, on a free transfer no less, to the Argentine side Godoy Cruz. With Godoy Cruz, he became a very dependable midfielder, comfortable both attacking and defending, and scored six goals in 49 matches.

In 2011, his childhood dreams came true, as he signed on to play with Argentine legends River Plate. As the story goes, when the 17-year old Sánchez went to try out for Liverpool he showed up wearing a River Plate jersey, and he’d been dreaming of putting it on again ever since. Anyway, Los Millonarios had just been embarrassingly relegated for the first time in their 110 year history the season before (remember the crazy swearing old Argentinian guy??), and Carlos saw it as a chance to help himself and his dream club, so he signed. Carlos scored his first goal in August of 2011 against Independiente Rivadavia, and ended up helping the team return to the Primera the very next season. He was loaned out to Mexico’s Puebla for the 2013-14 campaign before coming back to River to play the last two years. He’s become a dependable member of the team, having scored 19 goals in 116 matches for Los Millonarios.

He’s been so good, in fact, that he caught the attention of Tabárez and his brain trust. We mentioned that Sánchez, despite being 30 years old, is pretty much a rookie on this Celeste squad. He didn’t even represent Uruguay at the youth levels, and he didn’t make his national team debut until November of 2014, in a friendly against Costa Rica. It was another dream come true for the Montevideo native. Counting his Copa América debut the other day against Jamaica, Sánchez has now been called five times to represent Los Charrúas. He hasn’t been that impactful so far, but he hasn’t done anything to cost the team, which I take as a good thing.

I’m looking forward to seeing how he performs at this Copa. I know he’s not one for the future, like Diego Rolán or Giorgian De Arrascaeta, but he can certainly help the team right now. I hope he does.

Check out some highlights from his time at River Plate: