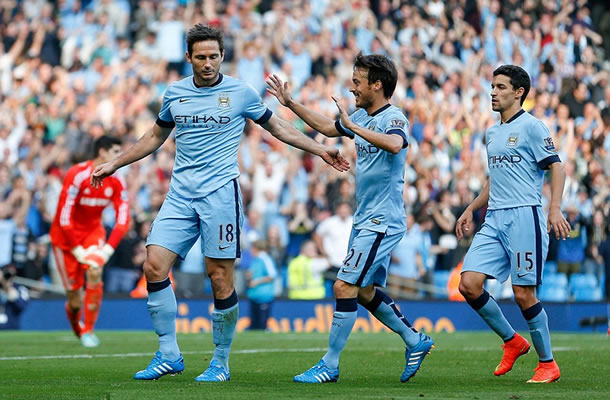 Did everyone see what Frank Lampard did against on Sunday? With his team, Manchester City, down by a goal and also down one man (Argentine international Pablo Zabaleta was sent off for a second yellow in the 66th minute) in the 85th minute, Lampard scored from the penalty area off of a beautiful ball by James Millner to tie the game and salvage a point for The Sky Blues in their clash against Chelsea at home in Ethiad Stadium.

Why was that a big deal? Why should you care? For one, Lampard is going to be one of the shiny new stars of NYCFC, when they join Major League Soccer next season. Also, he’s one of the best English Premier League players of all time. Oh did I mention he’s the all-time leading scorer for Chelsea? That they basically let him go for nothing this off-season because they thought he was too old? How about that Man City beat Chelsea out for the league championship last year by four points? In retrospect, I probably should have led with that last set of tidbits instead of teasing you guys, right?

Anyway, yes: Lampard spent 13 seasons wearing the royal blue, scoring 211 overall goals (147 league goals) in 648 appearances (429 in-league) during that time. He is an absolute legend at Stamford Bridge, and one of Chelsea’s most revered players of all time. On May 23rd of this year, Chelsea flat out released the 36-year old. Yes, they had the intention of resuming contract talks after the World Cup, but I think we all know how those situations go. Lampard ended up signing as a free agent with NYCFC, who loaned him out to Manchester City (the teams share ownership, which is interesting), so that he could keep his game tight while waiting for the Bronx-bound club to start play.

Lampard had previously said he didn’t want to suit up for the Sky Blues for matches against his former squad, but so much for that, I suppose. Not only did Lampard suit up and enter the game as a substitute in the 78th minute, but he personally handed Chelsea their first non-win of the year. While The Blues still sit atop the Premier League table with 13 points, Lampard and Man City showed that a Chelsea league title may not necessarily be a foregone conclusion this season.

Congratulations, Frank. That’s how you take it to your old team. At least he didn’t celebrate the goal, as per gentlemanly football traditions.

Check out Lampard’s goal, and his emotional reaction: