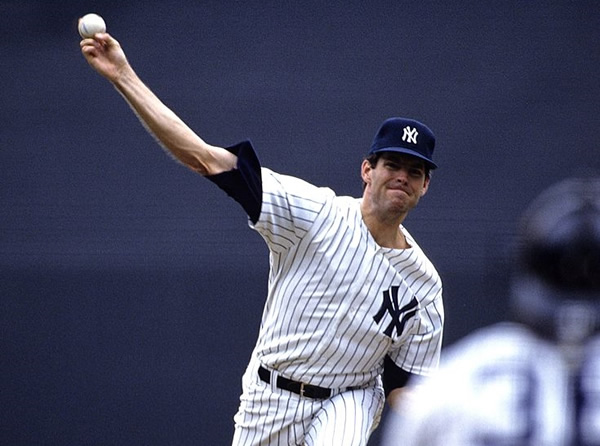 Michael Pineda recently set the Yankees record for the fewest walks through a starting pitcher’s first 30 starts with the Yankees. Through his first 30, Pineda has an incredible 20 walks and 170 strikeouts in 182.2 innings. The record he broke stood for 24 seasons, and was previously held by today’s Forgotten Yankee. Let’s get to know Scott Sanderson!

The Yankees got Scott Sanderson prior to the 1991 season under some fairly interesting circumstances. First of all, the last thing Sanderson ever wanted to do following the 1990 season was leave the Oakland A’s for the Yankees. The 1990 season was Sanderson’s first for the A’s after a career spent playing for the Cubs and Expos. He won 17 games, and the A’s made it all the way to the World Series (a loss to the Cincinatti Reds). He absolutely loved ihis time there. According to the New York Times, he didn’t even negotiate with any other teams that off-season.

Apparently, the A’s didn’t feel as strongly about Sandy as he did about them. When it looked like one of their aces, 27-game winner Bob Welch, wasn’t going to sign, they got Sanderson to accept arbitration to stay with the team. When Welch ended up re-signing, the A’s didn’t want Sanderson anymore, and ended up basically selling the 34-year old to the Yankees for $100. Yep. $100. The Yanks signed Sanderson to a two-year, $4.5 Million contract, and he became their very reluctant ace. For his part, Sanderson was pretty butt hurt about it. He told Murray Chass on New Year’s Day, 1991:

“When you go to a team, no matter what team it is, and perform well for them and that team basically says there’s no place for you, emotionally that’s tough. Sometimes people look at us as machines, but any player wants to be wanted and appreciated and when you do a good job for a team, you expect that in return. I would have liked it better if the Athletics had said we want you. But the Yankees said we want you, and now I’m with them.”

Things started out pretty well for the Dearborn, Michigan native. In his Yankees debut, he nearly no-hit the Detroit Tigers. He took his no-no into the ninth, which is when Tony Phillips hit a fly ball to deep right. The wind took it away from Yankees’ right fielder Jesse Barfield, and the ball ended up hitting the top of the fence. Sanderson didn’t finish the game, but he won and impressed everyone during his first game in pinstripes.

Sanderson had a pretty great season the rest of the way. He used his mild fastball–according to this article in the New York Daily News, his fastball clocked in in the mid-80s–and expertly located changeups and curve balls, to mow down opposing hitters throughout the early months. Sanderson made his first and only All-Star team that year, and got to reunite with Athletics manager Tony LaRussa. Many theorized that he was only chosen because LaRussa was the manager, or because the rules stated that every team had to be represented, and the Yankees were terrible, but Sanderson was 9-3 with a 3.93 ERA at the break. He was clearly the Yankees ace, so it was pretty fair that he was chosen.

While Sanderson continued his solid play throughout the second half, the Yankees tanked, quickly falling way out of contention. This led to some ill will on the part of Sanderson. In early October, he was still talking about how he would rather have pitched in Oakland, and told Harvey Araton of the Times:

“Gee, what is the right adjective [to describe the season]? Every adjective I can think of, I have a reason for not wanting to use it. If we are close to being a good team, we certainly haven’t shown it. It’s hard to get past the fact that we’ll end up with the record that we have.”

Well then. Excuse me, Mr. Fancy. For a guy who spent his whole career on the terrible Cubs and Expos, his nose was a bit in the air at the thought of losing. I mean, he spends one year in Oakland and all of a sudden he was acting like he was too good to be on the Yankees. Sanderson finished the year 16-10 with a 3.81 ERA. He followed that up with a horrible 1992. Sanderson struggled all year long, finishing at 12-11 with a 4.93 ERA as the Yankees continued to struggle in the standings. At the end of that season, the Yankees declined the option year on his deal and bought him out for $250,000. Thus ended the pinstriped tenure of the reluctant Yankee, Scott Sanderson.

As far as the early 1990s Yankees go, Sanderson can claim he was one of the better pitchers on the team. I know that’s hard to believe when you consider the fact that such greats as Andy Hawkins, Chuck Cary, Tim Leary, Mike Witt, Scott Kamieniecki, but it’s true. If only he hadn’t been such a diva about being on a bad team, they might have hung onto him (presumably at a reduced rate, since he stunk it up in 1992), and he could have been there to witness the franchise’s resurgence in the mid 1990s. Instead, he lived out the rest of his career with the Giants, White Sox and Angels, and retired after the 1996 season. Overall, he played 19 years in the bigs with the Expos, Cubs, Athletics, Yankees, Giants, White Sox and Angels, winning 163 games with a 3.84 ERA. Solid numbers for a solid pitcher.

His Yankees tenure came during some dark days for the franchise, but it’s nice that Pineda’s 2015 success has shed some light on Sanderson’s great 1991 season.