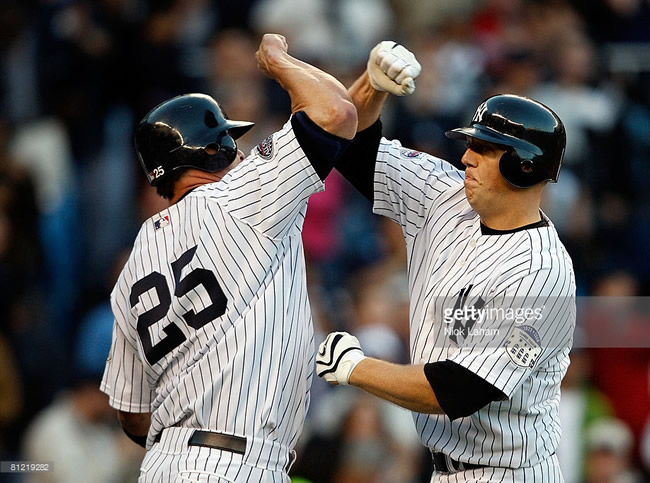 This post originally appeared a week ago on Pinstripe Alley. You can read the original article here.

First of all, I want to thank you readers. After all of the awesome suggestions from my Raúl Mondesi post a couple of weeks ago, I figured I’d give you, the readers, a chance to choose this week’s Forgotten Yankee inductee. For all of you who voted in the poll from my Kevin Maas post, you didn’t disappoint. You demanded Shelley Duncan, so I will give you Shelley Duncan!

If you want to talk about former Yankee David Shelley Duncan, you have to start with his family. Shelley is the son of former big league catcher Dave Duncan, who played for 11 years with the Royals, Athletics, Indians and Orioles from 1964-1976, and then acted as the primary pitching coach for legendary manager Tony La Russa for basically 30 years, with stops on the White Sox, A’s and Cardinals. Shelley’s younger brother Chris Duncan also played in the big leagues, actually making it to the show two years before Shelley, and spending five seasons as a part time outfielder and first baseman playing for his dad and La Russa in St. Louis.

Baseball was definitely in the Duncan blood, and Shelley kept the tradition going as he grew up. He had a decent college career that included Freshman All-American honors in 1999 and First Team All-American honors in 2001 at the University of Arizona, which led the Yankees to pick him in the second round of the 2001 draft. He reported to Staten Island that summer and started hitting homers, which is exactly what the Yankees expected him to do when they picked him. Because he wasn’t a big time prospect in the Yankees system, Duncan climbed slowly up the minor league ladder. He spent one year in A- ball, a year in A ball and two years in A+ ball, but it was in 2005 when, at age 25, he made his first big splash at AA Trenton.

Duncan made his debut against the Rays on July 20. He went 1-4 in a 14-4 Yankees loss, but he would make a huge impact on the rest of the series. The next day, he hit his first major league homer against Jae Kuk Ryu, and would hit two more dingers the next day. That multi-homer game made him the first Yankee since 1914 to have more than one homer in a game within his first five major league games. It’s interesting to note that two other guys, Jesus Montero and Greg Bird, have accomplished the feat since, but that shouldn’t take away from the accomplishment. Anyway, Shelley kept on hitting the rest of the summer as a part time outfielder and first baseman, and he finished up at .257/.329/.554 with 7 home runs and 17 RBI and an OPS+ of 127 in 34 games and 83 plate appearances.

I don’t want to bog this post down with too many numbers, because it’s not like Duncan had a prolific or ridiculous Yankees career. He was just a fun guy to have on the team. When he came up in 2007, he really injected some enthusiasm into the clubhouse and lineup, and it showed every time he “bash brothered” his teammates after hitting homers. The forearm smash made famous by Mark McGwire and Jose Canseco when they played on papa Dave Duncan’s A’s teams in the late 1980s looked like it really hurt when Shelley did it to his Yankees teammates, and don’t get me started on his monstrous high fives. Duncan really looked like he was having fun out there, which made him really easy to root for.

Not only that, but it seemed to me that he was a great teammate. He famously started a bench-clearing brawl with the Rays in the spring of 2008 when he slid spikes high into Akinori Iwamura at second base. Who gets into a fight in spring training? Well, Duncan and the Yankees were just retaliating for an incident a couple of days earlier, when Rays infielder Elliot Johnson had broken then minor league catcher Francisco Cervelli’s wrist in a home plate collision. I don’t condone the spikes high slide, or the fighting, but you gotta like it when a young player stands up for his teammates on the field. Duncan was also involved in another on-field fight in 2009, where he came to the aid of Jorge Posada during a fracas started by the Yankees former catcher. Duncan stuck up for Jorge and got right in the middle of the brawl, taking down Jays catcher Rod Barajas to the ground. Joe Girardi ended up getting a black eye and a cut in the fight, which he claims was from an errant elbow thrown by one of the Yankees. Would you be shocked if it had been Shelley? Probably not. Alas, I was unable to confirm anything on that front. Again, not condoning the fighting, but that’s the kind of guy Shelley Duncan was back then. He would do everything he could for his teammates, and it was fun to watch.

Good teammate or not, his Yankees career would come to an end after the 2009 season. Despite putting together a AAA season good enough to win the International League MVP, Duncan wasn’t called up until September. After barely playing, he chose free agency rather than going back to AAA in November. He ended up signing with the Indians, where he put together a few decent productive seasons as a platoon player, and once made three consecutive jumping catches against the fence in the same game (his reactions to the second and third ones are absolutely priceless). His big league career ended after a short stint with the Rays in 2013, and he unofficially retired after being released by the Diamondbacks and Reds during the 2014 season. His numbers as a Yankee were far from inspiring at .219/.290/.411 with 8 home runs and 24 RBI and OPS+ of 81 in 68 games and 163 plate appearances, but if he’d had a historic career, he wouldn’t be a Forgotten Yankee, would he?

I’ll always have fond memories of the Shelley Duncan era, and I hope you do too, Pinstripers. Tell me about it in the comments below! Also, you can once again vote in the poll to see who I profile next time!