Warning: "continue" targeting switch is equivalent to "break". Did you mean to use "continue 2"? in /nfs/c11/h04/mnt/193474/domains/jobusrum.com/html/wp-content/plugins/wp-author-box-lite/includes/ReduxFramework/ReduxCore/inc/extensions/customizer/extension_customizer.php on line 478
 Forgotten Yankees: Rondell White | Jobu's Rum
Skip to content 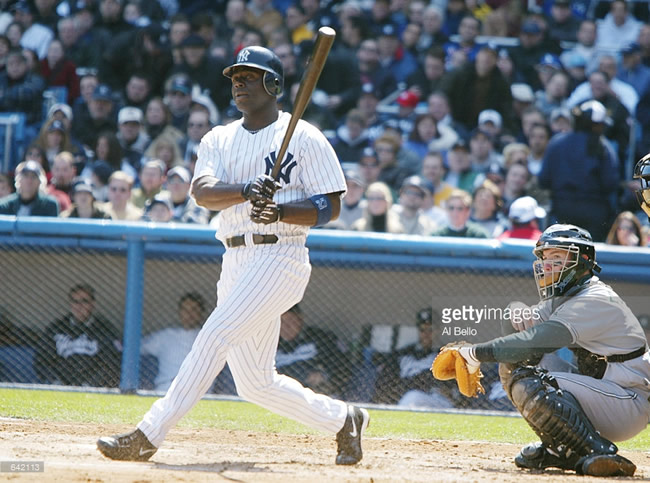 This article originally appeared on Pinstripe Alley one week ago. You can read the original piece here:

The love for Rondell White was overcome by the love for Shelley Duncan last week, but it seems that fans of the former Yankees left fielder rallied this week, because you guys picked him to be the subject of this week’s Forgotten Yankees post. I think Pascual Perez would have been my choice, but I am a man of the people. Let’s go back down memory lane and get reacquainted with Rondell White!

Unlike our last couple of subjects, White did not start his career with the Yankees. In fact, he didn’t come to the Bronx until his tenth year in the league. The Milledgeville, GA native was drafted 24th overall by the Expos in the 1990 draft, and he didn’t stay in the minors long, making his big league debut in 1993 at the age of 21. He would end up playing nine very productive seasons for Montreal, and at one point, was one of the better hitters in the league. He hit 28 home runs in 1997, and then hit .308/.366/.509 from 1998-2001. In 2000, he was actually traded to the Cubs for Scott Downs in 2000 (what a terrible trade), and he hit free agency after the 2001 season ready to cash in.

The problem with White up until that point had never been his bat or glove, but rather his durability. Before the Yankees signed him to a two-year, $10-million deal (that’s that Stephen Drew money these days), White had only managed to play a full healthy season once: that 1997 season during which he hit 28 homers. He had a history of a variety of injuries, including a groin issue in 2001, and hamstring and shoulder injuries in 2000. In fact, he was only able to play over 100 games three times in his first seven years as a regular MLB player. All of that helped him earn the nickname “RonDL” White, but Brian Cashman and the Yankees decided to ignore that, and signed him anyway. At least the contract was reasonable enough that the risk wasn’t that great, but there was definitely some hemming and hawing about it when he signed.

That reasonable contract ended up being a blessing, because White couldn’t even make it to spring training healthy, as he strained a rib cage muscle in February and missed some Grapefruit League action. He was, however, healthy in time to start the season. Possibly because of the shortened spring, he got off to a slow start, only hitting .232/.287/.404 in April. He picked it up in May, but a finger injury in early June caused him to miss about a week, and he only hit .242/.282/.424 that month. He had by far his best month in July, hitting .303/.325/.421, but the wheels fell completely off after that. White ended up hitting .216/.254/.366 in the entire second half, including .130/.181/.169 in August, and by the end of the season he had lost his starting job. He did manage to hit a home run in Game 1 of the ALDS against the Angels, but tweaked a hamstring on a groundout later in the game, and never played for the Yankees again.

That offseason, White tried to put his bad season behind him and get ready to play for the Yankees in 2003. He spent the winter months hoping he wouldn’t get traded, and told Charlie Nobles of the New York Times in March:

“I learned from last year. Sometimes you try to be so good you’re bad. You try too hard. It was my first year in baseball that I didn’t hit well, and I didn’t know how to take it. I was trying to hit 600-foot home runs. My ego got in the way… I know what I have to do [in 2003]. I feel good about what’s going to happen.”

Unfortunately, the Yankees didn’t care about any of his revelations. When Phil Nevin got hurt in spring training, the Padres needed an outfielder. The Yankees jumped at the chance to send White to the west coast, trading him to the Pads for Bubba Trammel and a former first round pick pitcher named Mark Phillips. That trade ended up being a bit of a disaster for the Yankees, as Trammell only made it until June before personal problems led him to basically abandon the team. At the time, it was believed he was upset at Joe Torre for not playing him often enough, but a year later we found out Trammell had been dealing with depression. His Yankees career ended on June 30th, when he was placed on the restricted list, and he never played in the majors again. Phillips never made it to the majors, and was pretty much out of baseball after a year in the Yankees system too.

In retrospect, everything about White’s time with the Yankees, other than that ALDS homer, was a disaster. He played terribly, finishing his run hitting .240/.288/.378 with 14 homers and 62 RBI in just 126 games. That .288 OBP was the third worst ever by a Yankee outfielder with that many games played at the time (Andy Kosco‘s .268 in 1968 and Wid Conroy‘s .279 in 1907 were worse). Also, the players they traded him for were complete busts (as far as contributing to the team. I don’t mean to downplay or dismiss Trammell’s depression issues). I think this is made all the worse by the fact that the Yankees pursued him over a man named Johnny Damon during that 2002 offseason. Damon was coming off of a bad season, but went on to four great seasons with the Red Sox (with many big hits against the Yankees), before the Yankees finally got him in 2007. Can you imagine if they’d had Damon during those Boston years? Sigh. I think it was best that they traded him and basically washed their hands of the whole situation as quickly as possible.

As far as the rest of White’s career goes, he did OK for himself. He made his first ever All-Star team with the Padres in 2003 (of course), but they ended up trading him to the Royals that August. He then played two years with the Tigers, and two more with the Twins, before retiring after the 2007 season at age 35. He finished it all with a .284/.336/.462 slash line, 198 home runs and 768 RBI in 15 big league seasons, which is very respectable. Unfortunately, his name came up in the infamous Mitchell Report the winter after his retirement, as he reportedly bought growth hormone and Deca-Durabolin from Kirk Radomski in 2000 and 2005. He allegedly wanted the drugs to help him stay healthy. It didn’t work anyway, so good job, Rondell.

Either way, White’s career was over. It was just a blip on the Yankees history radar, but he seems to have left an impression on you, Pinstripers, so please share some Rondell White memories in the comments below. Also, as usual, you should vote in the poll to see who I profile next time!