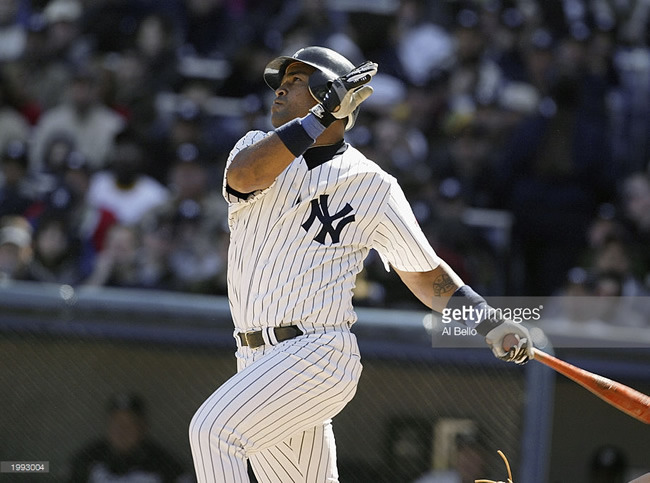 The 2000s were an odd time for the Yankees. They won the first and last championships of the decade, but the years in between were not very memorable. They won the division eight times and missed the playoffs just once, but when you don’t win championships, people tend to forget the success. They also tend to forget players who were on those teams, like today’s Forgotten Yankee. Let’s take a look back at the 2002 and 2003 seasons, and a player I think we’d all like to forget: outfielder Raul Mondesi.

Raul Ramon Mondesi Avelino was originally signed by the Dodgers as a 16-year old free agent out of the Dominican Republic in 1988. He quickly climbed through their minor league system, displaying a good combination of speed and power, and a cannon arm at every level on the way up. He made his major league debut in 1993 as a 22-year old, but he was still considered a rookie in 1994, when he slashed .306/.333/.516 with 27 doubles, 8 triples, 16 home runs, 56 RBI and 11 stolen bases. Mondesi took home the Rookie of the Year that year, and became a staple of the Dodgers’ lineup. Over the next seven seasons, he hit .288/.334/.504 with the Dodgers, socking 163 dingers and driving in 518 runs while stealing 140 bases.

During the 1999 offseason, Mondesi was traded to the Blue Jays in a deal that netted the Dodgers, among others, Shawn Green. Raul would spend two-and-a-half fairly productive seasons up north, which is when the Yankees came calling in 2002. Although the team was 50-31 and in first place in the division, George Steinbrenner was desperate to get back to the World Series (as he always was, God rest his soul), and so the Tampa Trust™ went over Cashman’s head to bring in some offense. Although Mondesi was clearly on the decline, and not quite the player he had been as a Dodger, he was still seemingly better than the Shane Spencer/John Vander Wal platoon the Yankees had going. Also, as they often did back then, the Yankees used the power of the dollar to get themselves a pretty good deal on their new outfielder. They took on the $5.5 million Mondesi was due the rest of that year, and $7 million of the $13 million he was due the next season, and all they sent back to the Jays was a 26-year old Double-A pitcher named Scott Wiggins.

The craziest part of this deal was that it was apparently sparked not because the Yankees had scouted Mondesi and thought he could turn his season around with a change of scenery, but rather because Tim McCarver said it was a good idea (on a nationally televised game), and Steiny took it to heart. I knew I never liked that McCarver. Anyway, Mondesi did alright the rest of the way for the Bombers, hitting .241/.315/.430 with 11 HR and 43 RBI in 71 games. He was, unfortunately, not the missing ingredient to the championship stew, as the Yankees lost to the Angels in the ALDS that October.

The 32-year old Mondesi actually got off to a pretty torrid start in 2003, hitting .347/.422/.683 with eight home runs in 27 April games, and I bet everyone felt pretty great about that trade then. However, Mondesi’s production soon declined, and his morale and level of effort seemed to go right along with it, especially when his playing time began to get cut against righties. Said Mondesi to the New York Times in early July:

“I’ve been playing in this league for a long time. Because I had a bad week? What about the first two months of the season? Who was playing against right-handers? Three months left, man. Only three months left. I can sign somewhere else next year. That’s O.K. “Yeah, I want to be here. But that way [as a platoon player], I don’t want to be here.”

Well boo hoo hoo, sir. Mondesi continued to sulk the rest of the month, and tensions continued to build between him and the club. A couple of weeks later, things exploded. Mondesi was pinch-hit for late in a game against the Red Sox and, rather than taking it like an adult, the fired up outfielder went to the clubhouse, showered and went home. He then skipped the team flight to the west coast the next day. Overreact much? Yikes. Two days later, he was gone. Said Cashman of Mondesi’s actions:

“He decided to shut it down. He showered and left before the game ended. He left the clubhouse and took off. That motivated me and Joe Torre to make a change. He was upset he was pinch-hit for, and he didn’t stay and root them on versus our rival. That made a statement. He played hard between the lines, but I need our players to respect the manager’s decision, even if they don’t play.”

The Yankees ended up finding a trade partner in Arizona. They sent Mondesi, and some cash to cover that big fatty contract, to the Diamondbacks for David Dellucci, Bret Prinz and minor leaguer Jon-Mark Sprowl. The players they got back weren’t all that great–Dellucci ended up hitting .155 in 58 at bats the rest of the way and Prinz had a couple of cups of coffee with the team over the next two seasons–but I think getting rid of Mondesi is what helped the team the most. They made it all the way to the World Series that year (after an exhausting ALCS against the Red Sox and a big Aaron Boone home run), but came up just short of another championship. Mondesi, meanwhile, played well the rest of the way for Arizona, but bounced around the league as a part-timer with the Pirates, Angels and Braves until he called it quits in 2005.

I wouldn’t call Mondesi’s time with the Yankees a fond memory. He came to them because George Steinbrenner was borderline certifiable when it came to winning. He didn’t help the team win and burned every bridge he could on the way out. The Yankees didn’t give up any top prospects to get him, but didn’t receive anything too good when they got rid of him either. Everything about Mondesi’s tenure in the Bronx was forgettable. At the end of the day, though, he had himself a pretty solid major league career, ending up hitting .273/.331/.485 with 271 home runs, 860 RBI, 229 steals, a Rookie of the Year Award, an All-Star Game appearance and two Gold Glove Awards. It’s just unfortunate that we didn’t get to see him in his prime or my memories of him might be completely different.

As for Raul, he’s moved on well after baseball. He’s currently the mayor of the San Cristobal province in his native Dominican Republic. Go figure! His son, Raul Mondesi, Jr, is currently playing in Double-A for the Royals as a 20-year old, so we might see him in the majors sooner, rather than later. What do you think Pinstripers? Do you have any fond memories of the Raul Mondesi? Do you have any other suggestions for a Forgotten Yankees post you want to see? Let us know in the comments below!