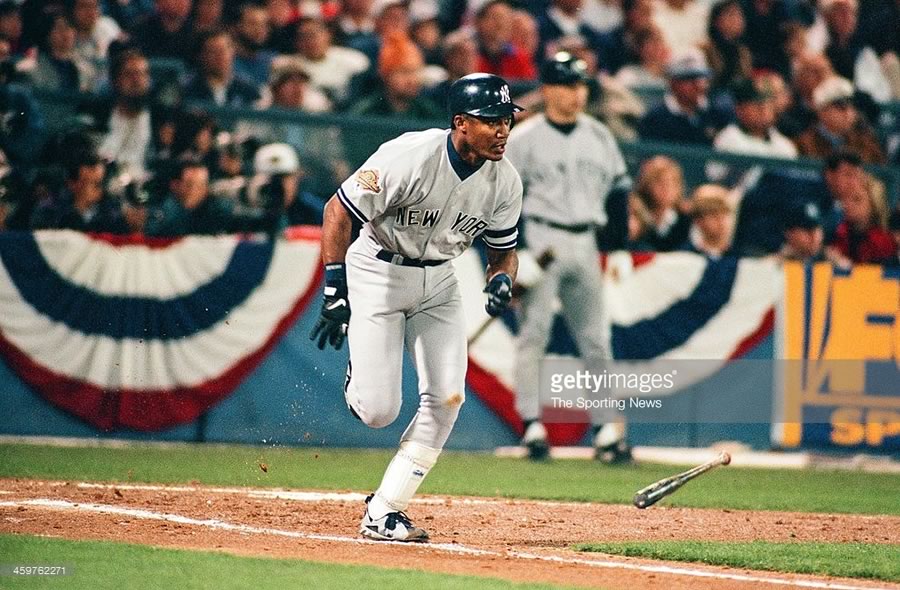 This post originally appeared on Pinstripe A”We play today, we win today. Dassit.” That was the summer mantra of the 1996 Yankees, on their journey to win the franchise’s first World Series title in 18 years. Who came up with that wonderful slogan? Was it Derek Jeter, the rookie shortstop who would go on to be among the greatest players in Yankees history? Was it Tino Martinez, the slugging first baseman who would win four titles in pinstripes? Was it even Bernie Williams, an outfielder who would go on to have his number retired by the squad? No. It was Mariano Duncan: a no glove, OK bat second baseman that somehow ended up being a key cog in the World Series run. Let’s take a look back at his brief run in the Bronx.

When the Yankees signed Duncan as a free agent prior to the 1996 season, nobody thought much about it. His two-year, $1.475 million deal barely made the papers. The Yankees needed a utilityman who could hit a bit, and be plugged into the lineup at several positions, and they gave Duncan, who had experience all over the infield and in the outfield, a two-year deal to do just that. Duncan was a career utility man who had previously played for the Dodgers, Reds and Phillies, amassing a decent slash line of .262/.313/.402 in ten seasons in the NL. When Yankees starting second baseman Pat Kelly had complications from the shoulder surgery he’d undergone that October and had to go on the DL in spring training, the Yankees somewhat reluctantly handed the second base job to Duncan. Before the season began, Joe Torre told the New York Times about the second base situation: “I hate to use the word desperate, but we really need to make a deal,” and that Duncan had “limited range, but he knows how to play and he’s played on championship clubs.” What a ringing endorsement!

Despite all of his on-the-field contributions, I think we all know that the best thing he gave to that 1996 team was not the high batting average, or even the game-winning hit in the top of the ninth inning of Game 3 against the Rangers in the ALDS that October. No. We all know that “We play today, we win today. Dassit!” is the best thing Duncan did for this team. The phrase was apparently big in the clubhouse before the fans even heard of it. I remember when they had one of those fun pregame segments to tell the fans about the shirts. It seemed to me that the phrase had been a mantra for the team for a while, and they’d just decided to make the shirts a week or two before that (I could be wrong). Either way, they made sure to tell us that the t-shirts were a team only thing that wouldn’t be going on sale for the public, which was equal parts cool (it wasn’t about selling t-shirts, fans) and lame (but I really want that t-shirt!!). Oddly enough, Wade Boggs tried to trademark the phrase for use in “T-shirts, hats, sweatshirts, shorts, sweaters, visors, sweat bands, pajamas, underwear and jogging suits” that August, but the application was abandoned…. Come on Wade. It’s just for the guys!

Anyway, all went well in 1996. Duncan didn’t just create a slogan that went on a t-shirt that a bunch of baseball players wore for motivation. Beyond improving the club’s fashion, he was a major leading presence in the overall clubhouse too. The team rallied around not just the “Dassit!” mantra, but the man himself. According to a piece in the Hartford Courant from October of that year, Darryl Strawberry said Duncan might have even been the team MVP at that point because of his “vocal encouragement to teammates on the bench and in the locker room.” That’s pretty impressive stuff for a utility guy afterthought.

Despite the World Series win and the parade down the canyon of heroes, Duncan’s tenure in the Bronx didn’t end as cheerfully as it began. He struggled early in 1997 and lost a chunk of playing time to Sojo, who played much better defense and ended up hitting .307 on the season. Duncan was frustrated with his struggles and his lack of playing time, and it all came to a head in early June. George Steinbrenner got tired of Duncan’s less-than-stellar defense, and told reporters that Mariano had been demoted from the starting second base job and would be a reserve outfielder for the club, never to play second base again. Duncan reacted angrily, telling reporters this:

“Send me the heck out of here or release me. Then I won’t be a problem for anyone anymore. What he did, by shouting that in my face, I don’t think I could ever be treated worse.”

On July 29, nearly two tension-filled months later and with Duncan hitting .244/.270/.308, the Yankees finally found a taker for their embittered utility man and former clubhouse leader. They traded him to the Blue Jays for a Double-A outfielder named Angel Ramirez. They had actually agreed to trade him to the Padres in a package deal with Kenny Rogers for outfielder Greg Vaughn a few weeks earlier, but Vaughn had failed a physical and the deal fell through. Either way, the situation was finally over. Duncan was happy, and the Yankees–both players and front office personnel–were relieved the ordeal was over. It was all very bittersweet.

It’s a shame the relationship between Duncan and the Yankees ended with such turmoil, but I will choose to remember the clubhouse leader who helped them end a nearly two-decade long championship drought. Although Derek Jeter, Tino Martinez, Bernie Williams and Paul O’Neill get a lot of the credit for those championships, guys like Duncan were the grease that kept the machine running clean, and he deserves more credit for helping kick off that late 1990s dynasty. What would you do now for a second baseman that hit .340? I thought so…

Anyway, share your thoughts on Duncan, or other forgotten Yankees you might want to know more about in future posts, below in the comments. Thanks for reading, Pinstripers!