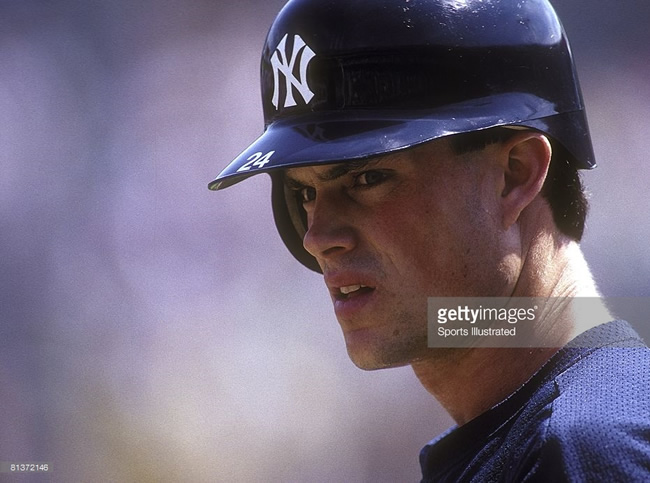 This article originally appeared on Pinstripe Alley one week ago. You can read the original here.

The early 1990s were a terrible time for the New York Yankees. Unfortunately, I was a brand new fan at the time, so I had no choice but to watch and fall in love with the mediocre bunch from the Bronx. My one shining beacon at the time was the man known as “Donny Baseball.” So, when my hero, Don Mattingly, hurt his back early in the 1990 season, I was devastated. Little did I know that Mattingly’s injury, and his struggles with a bad back the rest of that season, would open the door for a couple of the most exciting months in my personal Yankees history memory bank. Let’s all remember the guy who rekindled the fires that warmed our hearts for the rest of that cold and bleak 1990 campaign, and whose embers burned out just as quickly as they sparked, Kevin Maas!

Kevin Christian Maas was born in Castro Valley, CA on January 20, 1965. After a pretty good college career at the University of California, including a final season during which he hit .326/.463/.712 with a .386 ISO, 18 home runs and 66 RBI in just 55 games, the Yankees made him their 22nd round pick in the 1986 amateur draft. He brought with him a reputation for being a big lefty power bat (Maas is listed at 6’3″) and a good eye, something that Yankees scouts have always salivated over.

Maas reported to Low A ball and hit .356 the rest of the way for the Oneonta Yankees of the New York Pen League, which earned him a promotion to Fort Lauderdale of the Florida State League in 1987. He played well there too, which got him called up to High-A Prince William in 1988. It was there that Maas had his big breakout, smacking 12 homers in 29 games and earning an immediate call up to the AA Albany-Colonie Yankees. For the season overall, Maas hit .271/.381/.502 with 28 homers and 90 RBI in 138 games. In 1989, he reported to AAA Columbus, where he kept on hitting, finishing the season at .320/.399/.474, although an injury limited him to just 83 games and six home runs.

He reported back to Columbus to start the 1990 season, but he wouldn’t be there long. When he got off to an absolute torrid start (13 home runs and a .973 OPS in just 57 games), he got the call to come to the Bronx. You see, the Yankees were well on their way to a last place finish, so they had made a conscious front office decision to hand the season over to “the kids.” Unfortunately, they didn’t have any can’t miss, grade A type prospects in their system. They had Maas, Jim Leyritz and Pat Kelly. Now, I loved those guys, but it would do us no good to not be honest with ourselves about the state of the organization back then.

That being said, on June 29th, the Yankees were forced to place Don Mattingly on the disabled list, and they called up Maas to fill in at first base. Kevin went 1-3 against the White Sox in his debut that day, but struggled a bit to start his big league career. It took him five games before he hit his first big league home run, which he did against the Royals’ Brett Saberhagen on July 4 (hooray, America!). Kevin hit his second home run a few days later, then had his first two-home run game on July 14. About a week later, he homered in three straight games, including one that helped the Yankees foil the great Nolan Ryan‘s attempt at his 300th win. He hit another against Detroit on July 31, bringing his total to 8. On August 2nd, Maas hit two more home runs against the Detroit Tigers and, in the process, broke a major league record. He had become the fastest player to ever reach 10 home runs, achieving the milestone in his 77th at bat. Wowsers.

My favorite part about his early success for the Yankees, is that he good enough to inspire his own section of fans. The “Maas-tops,” as they were known, were all young girls who would remove their tops and dance around whenever he homered. Unfortunately, their passion was quickly snuffed out and they were removed and banned from the stadium. Oh well, it’s still freaking hilarious, even if it’s highly inappropriate. Even without his Maas-tops, Kevin continued slugging homers for the next two months. He finished the season at .252/.367/.535, with 21 homers, 41 RBI (he rarely found himself up with men on base, as the team was terrible), an OPS+ of 150 and 43 walks in just 79 games and 300 plate appearances. He finished second in the Rookie of the Year voting to Indians catcher Sandy Alomar, but the future looked pretty bright for the Yankees’ first baseman.

Unfortunately, for the Yankees, Maas’ incredible second half did not lead to a successful career as the new all-time great Yankees first baseman. The following year, with Mattingly healthy, Maas spent most of his time at DH. Also, the league realized all he could do was pull fastballs over the fence, so pitchers adjusted. Unfortunately, Maas was not quite good enough to re-adjust. That 1991 season, he hit .220/.330/.390 with just 23 homers and 63 RBI, and his OPS+ dropped to 100. Sure, he still walked a lot, but he only hit 2 more home runs than in his rookie season, despite having basically twice the plate appearances. The next year, Maas’ play dipped even more, and his playing time was cut. By 1993, the Yankees were desperately trying to trade him. They couldn’t, so they released him at the end of spring training in 1994. His Yankees career ended with a .232/.332/.427 slash line, 64 home runs, 164 RBI and an OPS+ of just 107 in 406 games and 1,448 plate appearances.

A little known fact about Kevin; he actually had a brother named Jason who was also drafted by the yankees. Jason, who was an outfielder and third baseman by trade, was drafted by the Bombers in the 10th round of the 1985 draft–the year before Kevin was taken. He wasn’t blessed with the power that Kevin was blessed with, but Jason used his speed to climb his way up the Yankees ladder. The two played together along several stops in the Yankees system, but the Yankees didn’t see in Jason what they saw in Kevin, and never called him up. In 1991, Jason got off to a torrid start in Colombus, hitting .352/.459/.507 in his first 30 games, but when the Yankees told him they wouldn’t bring him North, he asked for his release so that he could play somewhere else. When the Yankees refused to cut him loose, Jason simply retired, walking away from the game at age 28. Kevin once said that the Yankees never treated his brother very well. It’s a shame the two never got to play together in the House that Ruth Built, isn’t it?

Anyway, let’s get back on track. After being released by the Yankees, Kevin spent the next couple of seasons in AAA with the Padres and Reds before finally making it back to the big leagues for a quick stretch with the Twins in 1995. Unfortunately, that stretch lasted just 22 games, and he hit .193 with only one home run. Maas would go back to AAA with the Brewers, Astros, Reds and even back with the Yankees for a stretch, but his professional career would end in 1997. Oh, and by the way, his major league record for being the fastest player to 10 homers was broken eight years later by another Forgotten Yankee candidate, Shane Spencer, who hit his 10th home run in his 66th professional at bat.

I really hesitated to put Maas in the Forgotten Yankees series. For one, he was my favorite player when he came up, so I definitely remember him vividly. Secondly, it can be hard to forget a guy who makes such a big impact (if not on the standings, at least on a game by game basis) on what was a terrible team. However, the more I thought about it, I realized that his memorable moment lasted for just a couple of months. It was literally a drop in the bucket, and some people might have forgotten him (although some crazy at the train station asked me if I thought Greg Bird was going to be the new Kevin Maas the other day, so maybe not), but younger Yankees fans might never have met him, or seen him while he was playing well, so I think he qualifies. Plus, I really like writing about that terrible 1990 team for some reason.