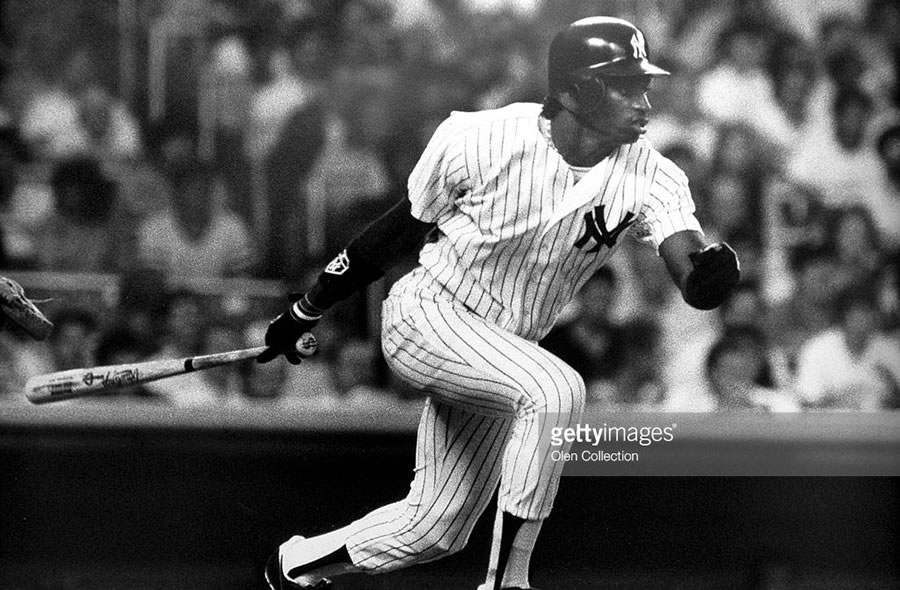 Last time, on Forgotten Yankees, we traveled back to the year 2002, when the Yankees accidentally ended up with Jose Canseco on the team. This time, we’re remember a slightly less notorious, but no less polarizing figure in “Prime Time” himself, Deion Sanders. Everyone remembers Deion as one of the more successful two-sport athletes of his day, but when it comes to baseball, we mostly think of him as a Brave and as a Red. Before all that, however, he was a Bronx Bomber. Let’s go back in time.

Deion was actually a three sport star at Florida State, dabbling in track as well as football and baseball. For the sake of this post, we’ll focus on his baseball career though. Sanders was mostly a speed guy at FSU, stealing 38 bases in two years as a Seminole. Otherwise, his numbers weren’t that impressive, although he did hit .333 in 16 games as a Freshmana. The Yankees liked him enough to use their 30th round pick to take a flyer on him in 1988, though, and he signed to play with the Bombers. (Deion was actually drafted out of high school by the Royals in 1985, but didn’t sign).

Sanders rose through the Yankees system pretty quickly, and I’m willing to bet that it had a lot to do with the fact that he was already playing professionally with the Atlanta Falcons of the NFL. Whatever the reasons, Deion made his major league debut a year after getting drafted, as the Yankees called him up from AA for a spell during the 1989 season. Manager Dallas Green said that calling up Sanders was just “something he wanted to do to add some juice , shake things up. We don’t want to put up with less-than-productive people. He may stay 5 days, 50 days or 150 years.”b Translation? The Yankees needed a center fielder, had no one else, and also were terrible and needed to draw crowds.

Either way, Sanders had a pretty brilliant debut; driving in a run, starting a rally and even gunning down a runner at the plate.c. He was only with the team from May 31 until June 11, but he did OK, hitting .212/.278/.303 with a homer, 3 RBI and a stolen base. Not bad for a 21 year old up from AA. He came back for a handfull of games in September before having to report to the Falcons, and finished the year hitting .234/.280/.404 with 2 HR and 7 RBI. During that same year, he became the first player to ever score a professional touchdown and hit a professional home run in the same week.

The next year was not nearly as fruitful for Sanders. He broke camp with the team, but struggled over the next four months. Sanders played in 57 games, but only mustered a .158/.236/.271 slash line with 3 homers and 9 RBI. He did get into a famous tiff with then White Sox catcher, Hall-of-Famer Carlton Fisk though, which is always good. Basically, Sanders was extremely flashy, even as a rookie, and curmudgeonly old Fisk wasn’t having any of it. This led to Fisk confronting Sanders about drawing dollar signs and “sauntering” up to the plate like he owned the stadium.d Before his next at bat, Sanders responded by telling Fisk that the days of slavery were over, and Fisk told him that, in no uncertain terms, no matter what color Sanders was, he was gonna get his ass kicked if he didn’t play the game the right way (at least according to Fisk).e What is it about catchers and unwritten rules?

Sanders provided another exciting moment on July 17, when he hit an inside the park home run off of Royals’ starter Mel Stottlemeyer, Jr. The home run was interesting because Sanders hit a liner to center. The center fielder, who was playing shallow, had to run basically straight to his left to get to the ball, and ended up diving and missing. The ball rolled all the way to the wall, and Sanders ended up having to barrell over the catcher twice just trying to reach the plate. Oh, by the way, the center fielder was none other than Bo Jackson, who was, of course, also a two sport superstar back in those days. To think, those two could have been teammates if Sanders had signed with the Royals back in 1985. C’est la vie.

Just two weeks later, however, his Yankees career came to a sudden end. The Yankees, angered or slighted that Deion wouldn’t sign a baseball only contract (allegedly for $2MMf) for the rest of the season, decided instead to cut him loose. On the way, though, they dragged his name through the mud a bit. GM Gene Michael said that, because Deion refused to play only baseball, and because of the media environment in New York, Deion and the Yankees would not have a fruitful relationship with each other, and it was best if the team moved on. “In a different town, he might be better,” said Michaels. Bitter, table of one.g

Sanders was released at the end of the month, and eventually signed with the Braves. That made for a much more convenient marriage of professions, as Deion got to play both of his pro sports in the same city. Eventually, he built a pretty solid major league career. Over nine seasons with the Yankees, Braves, Reds and Giants, he hit .263/.319/.392 39 homers, 168 RBI and 186 stolen bases as a part time player, never playing more than 115 games in a year because of his football committments. He’s the only player to ever play in both a Super Bowl (he won XXIX with the 49ers and XXX with the Cowboys) and a World Series (lost with the Braves in 1992).

Deion is now in the Pro Football Hall of Fame, and made a reputation as a pretty good Major League Outfielder after leaving the Bronx, but I’ll never forget when he was just another “failed” Yankees prospect.

Sanders’ Inside the Park Homer: