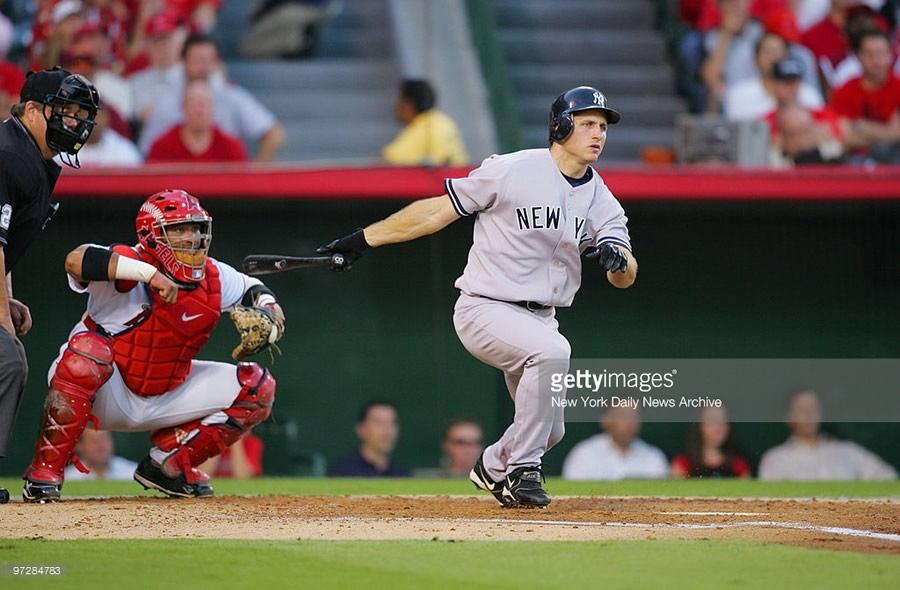 “I want to be an every-day player; that’s every kid’s dream. But I know in this organization things can change like the wind. I could be the starting center fielder and in two weeks somebody could be available.” – Bubba Crosby to George A. King III of the New York Post, December 1st, 2005

Truer words were never spoken, although it took three weeks for the Yankees to break Bubba Crosby’s heart instead of two. Back during the 2005 season, the Yankees told Crosby all the right things about being the one they wanted for center field, but had their eyes on a better suitor all along. Let’s take a look back at his career, and that heartbreaking offseason.

First, let’s take it back to the beginning of this tale. Crosby, a native of Bellaire Texas, was drafted by the Dodgers with the 23rd pick of the 1998 draft. He earned that first round nod by basically being an all-time badass at Rice University. He’s still their all-time leader in triples (20), and is second only to Lance Berkman–another candidate for this Forgotten Yankees series in a couple of years–in home runs (59), RBI (243) total bases (499) and slugging percentage (.737). Simply stated, he was a beast for one of the better programs in the country. That will get you noticed.

He made his Dodgers debut on May 29, 2003 and went 1-1 with an RBI, but it wasn’t enough to get the Dodgers to hold onto him. When the Yankees acquired Aaron Boone at the deadline, Robin Ventura was made expendable. Cashman sent the veteran third baseman to the Dodgers for Crosby and future Joe Torre right-hand-man Scott Proctor. As a prospect, Crosby might not have been much, but he could run and play great defense. Think of him as a very poor man’s Brett Gardner. Not a bad haul, along with Proctor, for a washed up third baseman. Bubba, who had been hitting .361 in AAA Albuquerque before and after his debut call up, finished out the season at Columbus, hitting .302/.366/.460 with a couple of homers in 16 games for the Clippers.

In 2004, Crosby made the team out of spring training. He homered in his first at bat as a Yankee and hit another homer in the same series against the White Sox, but was soon replaced by Kenny Lofton, who had previously been on the DL. He spent the rest of the season on the Columbus shuttle and was used mostly as a pinch runner and defensive replacement for the Bombers. He got into 55 games, slashing .151/.196/.302 and jacking two home runs in 58 plate appearances. Hey, he made the playoff roster for both the ALDS and ALCS, though, so that’s something. In 2005, he improved greatly after getting sent down early on, using a September surge to up his slash line to .276/.304/.327 with a homer and six RBI in 103 plate appearances over 76 games. He also played a pretty crisp centerfield, making no errors in 41 games. Crosby’s performance, and the fact that Bernie Williams was basically set to be a full-time DH, gave the Yankees a perfect patsy in their chase for a better centerfielder that offseason. As the off-season carried on, and the Yankees saw guys like Juan Pierre, Brian Giles, Mike Cameron and even Aaron Rowand go to other teams, they began spinning this narrative:

“I am comfortable with Crosby. Sure, he’s not an offensive player, but he’s not the give-up like he used to be. We need a guy who can catch the ball and keep the opposition to three outs. We have offense at first, short, second, third, right field, left field, catcher and DH. If we need the ninth-place hitter to be an offensive player, then we aren’t doing a credible job. If nothing else, we will give it a shot. I don’t want to move Matsui back and forth.” – Joe Torre to George A. King III on December 1, 2005.

If that’s not a ringing endorsement, then I don’t know what is. Sure, he stinks, but he doesn’t stink like he used to! And he can catch the ball! Who needs a real player? Certainly not us! As the weeks went by, Torre, Cashman and the Yankees stuck to their story, claiming they didn’t need to go after Johnny Damon, the former Red Sox center fielder who was still, somewhat inexplicably considering how good he had been, on the free agent market.

On December 21st, just under three weeks after Crosby spoke to George A. King III about wanting to be an every-day player, his Yankees career effectively ended. All along, while touting their “good friend” Bubba, the Yankees had been attempting to woo Damon and his agent, known ruthless negotiator Scott Boras. The two had been very far apart in negotiations, with Damon demanding a five-year deal, but the Yankees sticking to their original three-year offer, but the Yankees finally conceded the fourth year. They did so on one condition: Damon would either sign on the dotted line right then and there, or the Yankees would turn to fellow free agents Corey Patterson or Luis Matos instead. Seriously. That was the bluff that got us Damon. Boras must have been tired that day or something. Whatever it was, the Yankees finally landed the guy they wanted all along, and left Crosby, once again, on the outside looking in.

Now, no one who has been following the Brian Cashman era should be surprised to be reading this today. The Yankees pull the same thing seemingly every year, like when they were perfectly happy with Wilson Betemit playing third base ifAlex Rodriguez opted out in 2007, or with Dellin Betances at closer prior to this season (although Dellin is very capable), or with Lyle Overbay at first base in 2013. Okay, that last one actually happened, much to our horror, but you get the point. Crosby was never going to be the Yankees center fielder for any significant amount of time. They replaced him with Kenny Lofton in 2004, with the aging Bernie Williams in 2005 and snuffed him out completely with Damon in 2006.

Also, I should say this before you accuse me of not knowing anything about roster construction: The Yankees absolutely did the right thing here. They wanted to drive down the price of their real target, so they used a guy that could probably have handled the bare minimum requirements of the job as leverage during negotiations. I just always felt bad for Crosby, because I’m pretty sure Torre and Cashman had to stifle laughter every time they said they were happy with Crosby every time Crosby’s chances of being the center fielder came up. They even gave Damon Crosby’s number 18! Talk about adding insult to injury.

Crosby started the 2006 season on the Bombers as a reserve outfielder, but was slowed by injuries in the late spring. On August 4th, after hitting .207/.258/.299 with a homer and six RBI in 65 games, he was designated for assignment. He cleared waivers and ended up back in Columbus, but was gone as a minor league free agent at season’s end. Over the next couple of seasons, he tried to catch on with the Reds and the Mariners, but a shoulder injury while with the Reds made sure he never again made it back to the majors. As of 2011, Bubba was home working for his family’s business.

Here’s the only video of him I found on mlb.com (sorry, Bubba):