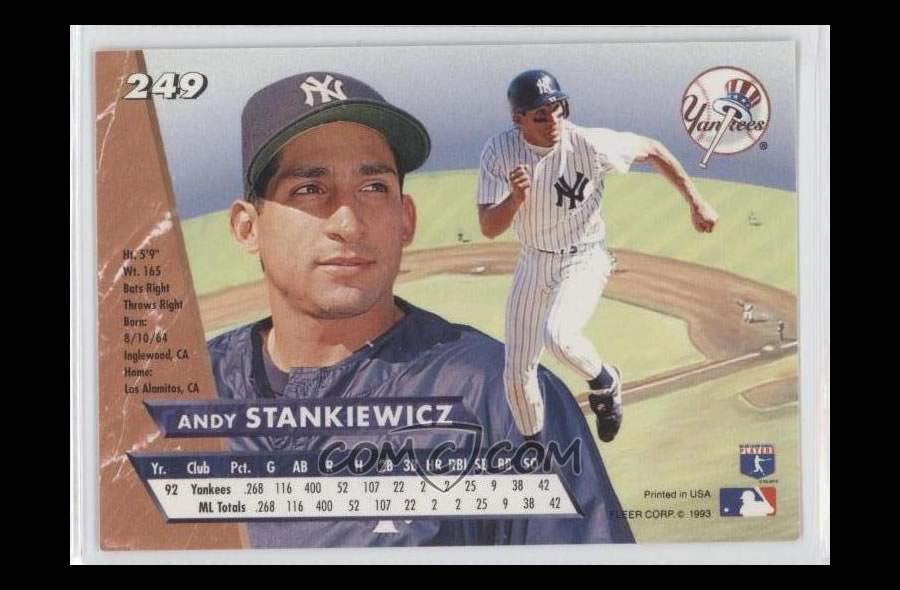 The Yankees spent this off-season looking for someone to take over for the legendary Derek Jeter. While no one will ever replace Jeets, I think Didi Gregorius has settled in and done a fairly admirable job in a very pressure-filled situation. Back in 1992, when playing shortstop for the Yankees had lost a bit of luster due to a couple of decades of bad players, the Yankees called up a kid named Andy Stankiewicz to fill in for an injured Mike Gallego. Over the next six months, “Stanky the Yankee” thrilled us all with his glove, and won our hearts in the process (at least my 10-year old heart). As quick as his rise was, his fall was possibly quicker. Let’s take a look back at his career in pinstripes.

Andrew Neal Stankiewicz was born on August 10, 1964 in Inglewood, California. His father, Al, was a former member of the LAPD by day, a clandestine boxer by night and a guy who never let his son’s diminutive stature be a burden. Did I mention Andy Stankiewicz was small? His Baseball-Reference profile lists him at 5’9″, but everything I remember, and have read while researching this post, puts him at barely 5’7″. Either way, the point is that Andy had the odds stacked against him–at least as far as professional baseball goes–all his life. Despite that, he worked hard, had a great career at Pepperdine University and turned himself into a 12th round pick by the Yankees in 1986.

His climb to the major leagues was somewhat unlikely, and therefore took a long time. Simply stated, guys like Stankiewicz are going to be overlooked or not be taken seriously because of their height, and so teams are often hesitant to promote them aggressively (Houston’s Jose Altuve being an exception to the rule). Stanky spent two years in A-ball, parts of two years in AA, and two full seasons at AAA Columbus before he ever got his call. In all, he spent six years in the minors to start his Yankees career. One blessing he had was that Buck Showalter was basically making the same climb through the minor league system at the same time, albeit through the managerial rankings. Showalter managed Stankiewicz at three different levels, so when the major league Yankees needed a shortstop to start the 1992 season, Buck knew just who to call on. Said Buck about Andy in a later interview:

“I think Andy plays the game the way people wish everyone played it. People identify with him. I have learned to no longer be surprised by anything Andy does. He is a guy you have to see every day to appreciate.” – to Jack Curry of the New York Times, March of 1993

Stankiewicz got his big break in the spring of 1992. Mike Gallego, the Yankees shortstop to be for that season, bruised his heel in late March and started the season on the disabled list. Because of that, and the fact that he hit around .400 that spring, Stankiewicz made the team as the last man on the roster literally hours before Opening Day. He made his debut as a 27-year old rookie on April 11th as a pinch-hitter (the Yankees were blowing out the Tigers), and played again as a defensive substitution the next day. On April 14 against the Blue Jays, he earned his first start, singling, walking and driving in a run in four plate appearances.

Stanky the Yankee won the hearts of fans for many reasons, and stats weren’t everything. For one, he was the biggest underdog on the team. He was the smallest and least likely guy to contribute, but there he was hitting around .300 for the majority of the season, and even coming up with some big hits here and there. It also didn’t hurt that the diminutive shortstop reminded everyone of then Yankees color man, Hall of Fame shortstop Phil Rizutto. The two were roughly the same size, and even looked alike. Also, Rizutto seemed to love Stankiewicz, which made everyone love the rookie even more. Thirdly, because of his size and his father’s positivity, Stanky grew up with a drive to overcome that led him to go all-out on just about every play. He said to Jack Curry:

“Hopefully, they leave the game saying they got their 10 dollars worth from me. Even if we floped, I hope they would say that guy didn’t give me 10 dollars worth, but at least he tried. I’d want them to know that I lay it on the line every night.”

Unfortunately, Stankiewicz’s time on the Yankees would soon come to an end. During that off-season, the Yankees signed Spike Owen (another former Forgotten Yankee) to a three-year deal. With Owen on board, Gallego still on the team and guys like Pat Kelly, Randy Velarde, Jim Leyritz and Dave Silvestri all vying for playing time around the infield, Stankiewicz was pushed out of the picture in 1993. He barely spent any time on the major league roster, ending up 0-9 at the plate in 16 games. That off-season, he was traded, along with right-handed pitching prospect Domingo Jean, to the Houston Astros for closer Xavier Hernandez. If you don’t remember Hernandez, don’t worry about it. He was a disaster (as was Spike Owen).

Stankiewicz wound up playing six more years in the bigs with Houston, Montreal and Arizona. He made his way back to the Yankees farm system in 1999, but was released in 2000 and retired after a short stint with the Dodgers’ AAA club in Vegas. Since the end of his playing days, Andy has been coaching. He led the Staten Island Yankees to a Penn League title in 2005, coached as an assistant at Arizona State for a few years, and is currently coaching at Grand Canyon. His son, Drew Stankiewicz played ball at Arizona State and was taken by the Phillies in the 11th round of the 2014 draft. He is currently playing for them at Clearwater. By the way, he’s also listed at 5’9″ on Baseball Reference.

I know we like to pretend that Derek Jeter has been the Yankees shortstop for the last 40 years, but I wanted to shed some light on one of the guys who came just before the Jeter era. Stankiewicz was a fun respite from a couple of decades of terrible shortstops leading to Jeter’s Hall of Fame run. He was also one of my favorites as a kid, so I hope you guys enjoyed reading this as much as I enjoyed writing it.

Got any memories of Andy Stankiewicz, Pinstripers? Share them in the comments below!