Warning: "continue" targeting switch is equivalent to "break". Did you mean to use "continue 2"? in /nfs/c11/h04/mnt/193474/domains/jobusrum.com/html/wp-content/plugins/wp-author-box-lite/includes/ReduxFramework/ReduxCore/inc/extensions/customizer/extension_customizer.php on line 478
 Forgotten Titles: The WWF International Heavyweight Championship | Jobu's Rum
Skip to content 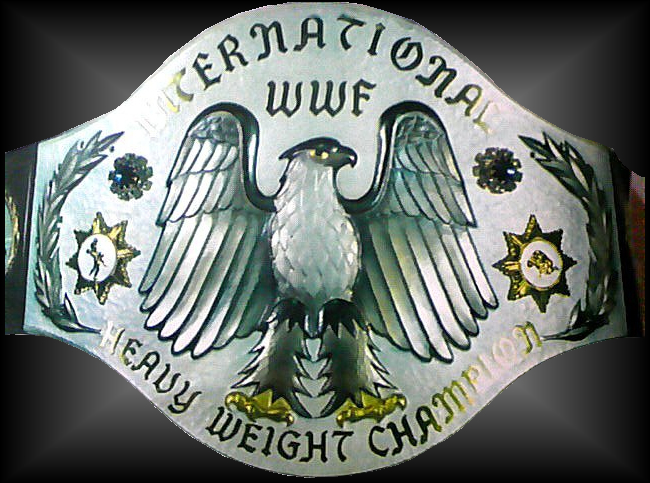 If you look around the WWE today, you’ll see a bunch of new titles. There’s the WWE Universal Championship, the Smackdown Tag Team Championships, the Smackdown Women’s Championship and the soon-to-be-in-play Cruiserweight Championship. When you throw in the titles we already had previously, there’s an awful lot for WWE wrestlers to fight over. Today, we’re going to focus on a belt that was once part of the WWE lore, but disappeared long ago and was taken out of the rotation: The WWE International Heavyweight Championship.

Considering the international scope of today’s WWE product, some of you might think it’s weird for there to have been an international championship, but the wrestling business was much more localized when this belt was created in 1948 (or 1959, but more on that later). Back then, WWE was known as the Capitol Wrestling Corporation, and was essentially NWA Northeast. Virtually all of their business took place in the Northeast territory. They didn’t even have a World Champion, because that’s what the NWA belt represented.

Sometimes, however, the companies did run international tours, or they would bring in some international competitors. In order to have something for the performers to fight over on these international tours, sometimes trophies were invented. After all, you didn’t want to “waste” a defense of your big American titles in front of a one-time audience in a world where no one would see it (no internet, no cable tv, etc). This is the reason the world got the International Championship.

There’s no dispute that WWE Hall-of-Famer Antonino Rocca was the first wrestler to ever hold this belt. When he won it, however, is up for dispute. Some places say he won it by defeating Dick Schikat on a tour of Argentina in 1948. Others say Rocca really won the belt by defeating the great “Nature Boy” Buddy Rogers in 1959. I have a feeling there’s truth to both of these. Rocca most likely won a “championship” on that tour in ’48, but I bet it wasn’t defended very often, if at all, until they needed it again in 1959. I’m willing to believe that maybe the 1948 date was actually credited to the title later to boost to the prestige of the belt. Either way, Rocca, who was Italian American and also had Argentine citizenship, was the first champ.

For a while, it looked like Rocca would be the only man to ever hold the belt. When Vince McMahon, Sr. broke free from the NWA and formed the WWWF in 1963, the belt disappeared. It wouldn’t resurface for almost 20 years. When it did come back, it did so under a joint venture between the WWF (now owned by Vince McMahon, Jr.) and New Japan Pro Wrestling. Again, a new venture needed something for its wrestlers to fight over, so the title came back.

The first person to hold the new international championship was Tony Parisi, and he did so starting in 1982. I couldn’t find any information on a match for the title, so it’s entirely possible that Parisi was just awarded the belt, or that the WWE made up a fake tournament and said Parisi won it there (the great 1982 Uruguayan tournament in honor of my birth, for example). Gino Brito held it next, defeating Parisi in Buffalo later that year.

In August of that year, the international belt finally wrapped itself around some international talent, when it was won by Japanese legend, and WWE Hall of Famer, Tatsumi Fujinami. Fujinami dropped it to another Japanese legend, Riki Chosu–in controversial count out fashion–in 1983. Fujinami won it back, but the deal between WWF and NJPW dissolved and the belt was shelved in 1985. There’s also another version of this belt that was used in a WWF and UWF (another Japanese company) in 1984, but it only has one recognized winner, Akira Maeda.

This is what happens when you have a belt you make up for no reason in a world where nothing’s real, and there’s no national or international television coverage and no internet. Nobody really knows when this belt was created. Was it 1948? Was it 1959? Nobody knows how many people actually held it, nor whom many of them beat to earn the belt. It’s a bit of a shit show that could never happen nowadays. If Jack Swagger suddenly showed up on Smackdown with a belt he claimed to have won in a tournament in Fiji last week, people would go to his Instagram and see that he was probably just flea market shopping with his wife in Connecticut at the time.

Anyway, no matter the disputed origins of this belt, one thing is for certain. It’s pretty fucking bad ass. The huge face is made of all silver, and the eagle on the plate is pretty damn classic. Considering how ugly some of the belts from bygone eras can be, this one is beautiful. I’m not saying they should bring it back, because the last thing WWE needs is another belt, but next time they need to design a belt, they should cast an eye towards this big silver eagle. It’s a thing of beauty.

Hope you enjoyed this little history lesson. We’ll be back soon with another Forgotten Title.